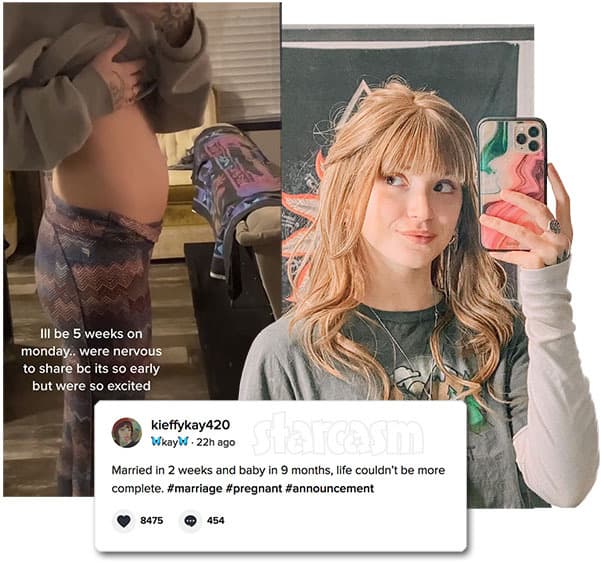 Less than two weeks after announcing her engagement, former Unexpected mom McKayla Adkins reveals that she is currently pregnant — and getting married in two weeks!?

McKayla made the pregnancy announcement with a TikTok video on Sunday. In the first part of the clip, McKayla has her hand over a Clearblue pregnancy test before moving her hand away and revealing the word “Pregnant.”

The video then cuts to a profile view of McKayla’s new baby bump. “I’ll be 5 weeks on Monday,” the text over the photo reads. “We’re nervous to share bc it’s so early but we’re so excited.”

In the caption for the TikTok video, McKayla made the reveal that she plans to walk down the aisle with her fiance, Ethan Tenney, in just a couple weeks! “Married in 2 weeks and baby in 9 months, life couldn’t be more complete,” she wrote.

In addition to congratulatory responses, McKayla’s announcement also inspired folks to ask a lot of questions. She took the time to answer some of them — including the most frequently asked questions stemming from the misconceptions that she still lives with her grandparents and doesn’t have full custody of her two previous children with Caelan Morrison:

I’m just going to answer this rn lol I have full custody of BOTH my kids. They BOTH live with ME and ALWAYS have. Idk why/when this started becoming a popular question??? Also, my grandparents don’t take care of my kids lol they babysit sometimes be they’re the only people I trust with my kids. I’ve been living on my own with my children since 2019.

Was the baby planned?

McKayla makes it very clear that the pregnancy was no surprise. Actually, that is why they found out at just five weeks. “The only reason we found out so early is because we were trying,” she explained in the comments of her TikTok video. “My fiance and I did plan this baby,” she said in another response. “But for a long time we were preventing it because we weren’t ready.”

What kind of birth control was the couple using? MacKayla says they used the “pull out method” and “it worked for as long as we wanted it to work.”

Someone brought up the fact that McKayla has previously stated that she didn’t want to have more children — at least not this soon. McKayla iterated that the pregnancy was indeed planned before explaining: “I decided not to let past experiences keep us from having what we wanted together.” Later in the comment thread she added: “I’m so excited for this pregnancy, though, and to be doing it with my husband (:”

As McKayla fans are well aware, she is currently making most all of her money posting adult content on her OnlyFans account. Will the pregnancy put her and Ethan in financial dire straits?

“I’ve already gotten more subscribers for people who enjoy this kind of stuff,” McKayla assured everyone. “I’m not worried about my income at all. And I have plenty of money saved away, so we’re all good in that department.”

Another thing that fans of McKayla are well aware of is her fondness for marijuana. How will the pregnancy affect that aspect of her life? Will she stop smoking weed?

“For now yes,” McKayla reveals. “I’ll start smoking again once the baby is here and a little older (:”

As far as McKayla’s wedding, she didn’t share any additional information about that. I will be the first to admit that I can’t wait to see what McKayla’s wedding looks like! Hopefully the short time frame won’t prevent her from having a full ceremony — I’m dying to see what she chooses for a wedding dress!

Congratulations to #Unexpected OG @mckayladkinss for getting engaged to her bf of just over a year! Check out her non-traditional engagement ring. Plus, McKayla reflects on cancelling her wedding with ex Caelan Morrison. #UnexpectedTLC https://t.co/scpY8nbkpQ

Congratulations to McKayla and Ethan! She is the first to admit that she had a difficult time with her first two children due to her toxic relationship with their father. (I believe Caelan would concur, but the two probably wouldn’t agree on who was most to blame for the toxicity.) McKayla and Ethan celebrated their one-year anniversary on 4/20 (of course) and they do seem to get along a million times better than she and Caelan. I wish them the best — and I wish TLC was filming all this!

Want to offer up your thoughts on McKayla’s pregnancy and wedding announcement? Join the conversation over on Instagram: