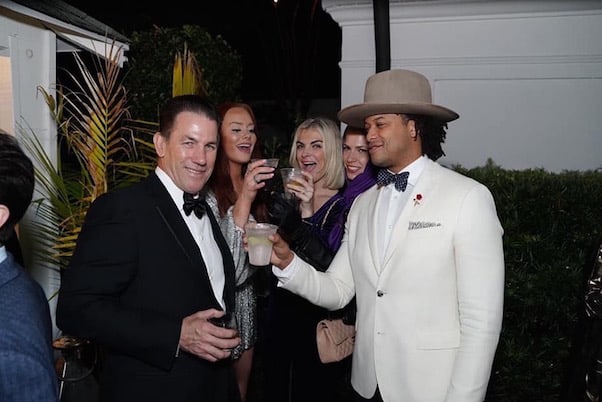 It sure looks like the unthinkable is about to happen on Southern Charm Season 7. Thomas Ravenel and Kathryn Dennis, who’ve been in the tumultuous, legal-and-drug-problems, “off-again” phase of their relationship far longer than the baby-making “on-again” part, appear to be getting back together and angling for a return to the show.

The gossip about Thomas Ravenel and Kathryn Dennis back together is just the latest in a long string of eyebrow-raising claims about the couple, and Thomas in particular. We first reported on the rumors that Thomas would be returning to the show a couple of weeks ago, after it looked like Bravo execs were so dissatisfied with early Season 7 footage that they took the unprecedented move of scrapping the whole thing and ordering the show’s production company to start over from scratch.

Basically, the prevailing belief is that Thomas has been protesting a bit too much about how he doesn’t really want to return to Southern Charm, and that the network would love to have him back in order to ensure a product worth watching. And about the only thing that could be better would be if Thomas Ravenel and Kathryn Dennis decided to dust their relationship off and give it one more try. So we turn to a favorable, anonymously sourced People article, one that definitely reads like either Thomas and Kathryn’s reps or the couple themselves are trying to drum up further enthusiasm for their reality TV return.

First of all, the article essentially confirms that Kathryn and Thomas are back together “romantically.” The article emerged after Kathryn shared the photo at the top of this article, of herself, Thomas, and Southern Charm cast members Chelsie Ravenell and Jacquelyn Stewart together at a James Bond-themed party. And as soon as the buzz about Kathryn and Thomas began to build, People published its article.

Here are the relevant quotes from the magazine’s unnamed insider:

“Thomas and Kathryn have been spending a lot of time together. They’re on really good terms. It started with co-parenting, but it quickly grew into something more,” the source says. “She feels comfortable with him again, and they’ve both kind of tossed aside any other relationships they had for each other. There’s that spark, and they’re letting themselves explore it right now.”

…“It’s not like they’ve defined their relationship that they’re back together right this second, but that’s very much what’s happening,” the source says. “The thing with them is, this all can change in two days. That’s how they are. It’s always so up and down. Right now it’s up and in a very good place.”

Is there any way to translate “letting themselves explore [that spark]” other than spending a ton of time back in the sack together? Note also that the second paragraph leaves a convenient out in case these two even-keeled personalities all of a sudden clash and Thomas and Kathryn break up again. As for whether Thomas Ravenel and Kathryn Dennis will be back on Southern Charm, it’s important to note that the article never says “No.” In fact, it goes out of its way to suggest the opposite. What we know is that “producers have not reached out to Ravenel” (with a heavily implied “yet,” and an even more heavily implied wink-wink-nudge-nudge), and that “Season 7 is expected to start shooting soon.”

All in all, it’s a pretty straightforward bit of product placement. Thomas also offered a transparent excuse for why he and Kathryn are being photographed on each others’ arms at a party, telling a Twitter follower that he and Kathryn just want their kids to see them “getting along.”