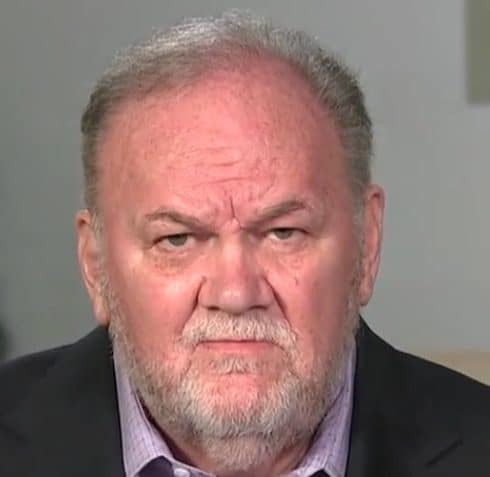 Meghan Markle’s father Thomas, who nearly torpedoed the royal wedding last month when the full extent of his fraudulent paparazzi scam became public, has sent Kensington Palace into a tizzy once more. This time, it’s Thomas’ unannounced, paid interview with Piers Morgan on Good Morning Britain that’s brought disgrace to his daughter. And a pair of new reports reveals the possible full amount Thomas has been paid for his three high-profile betrayals.

Last month, the Daily Mail published an exposé detailing Thomas Markle’s setup and collaboration with a known paparazzi, who took several dozen seemingly candid pictures of Thomas trying on tuxedos for the royal wedding and reading prominent gossip blogs. Several people who watched the photo sessions unfold — and some who even participated in them — confirmed that Thomas had planned the sessions with the photographer, who went on to sell the pics for an estimated $135,000.

Once that scandal broke, Thomas said he had never been paid for his participation, and he was only acting on the advice of Samatha Markle, Meghan’s half-sister, who claimed she told her father to go ahead with the setup “to benefit him and the royal family.”

The second problem, though, was that Thomas himself was acting as the source for TMZ’s long series of Thomas and Meghan Markle update articles during the few days in between the paparazzi scandal going wide and the royal wedding itself. Thomas’ continued participation in the controversy he also created led to widespread speculation that he had been quietly uninvited to Meghan and Prince Harry’s wedding — the official line from Kensington Palace was that Thomas had declined to participate of his own volition.

What is Thomas Markle’s net worth now? How much has he been paid for his public statements?

Which brings us to the latest iteration of this controversy. Earlier this week, Thomas made an unannounced appearance on Good Morning Britain, where he was interviewed by Piers Morgan and kept the fire of his betrayals alive. Thomas’ interview comprised the bulk of Monday’s GMB episode, which the producers dutifully billed a “World Exclusive” and milked for juicy soundbites.

For example, here’s Thomas claiming he made Prince Harry “promise he’ll never raise a hand to Meghan” (why would he have otherwise?):

And here’s Thomas alleging that Prince Harry told him to “give Donald Trump a chance” as President of the United States:

Now, a pair of new reports gives us some idea of just how much money Thomas Markle may have made from his paparazzi shots, his TMZ updates, and this week’s extended chat on Good Morning Britain. Several sources told Lainey Gossip that Samantha Markle was once again behind the GMB interview — “which means it wasn’t for free.”

Celebitchy was the first to extrapolate from that amount and apply it to the whole spread of Thomas’ media appearances over the past few months. “Between the staged pap photos, the GMB interview[,] and the TMZ exclusives,” they conclude, “Thomas Markle has easily stocked away about $200,000 from selling out his daughter.”

And, in case you’d forgotten, Celebitchy’s article also helped remind everyone why this is such an issue for Meghan, Harry, and the rest of the royals:

Piers Morgan also confirmed that Thomas Markle didn’t give the palace a heads-up whatsoever that he was doing this LIVE interview. So once again, Meghan’s father screwed over the palace publicly. How f–king stupid. When Thomas showed his ass just days before the wedding, I said that long-term, it would be a good thing because it would be Meghan’s excuse to completely cut off this side of her family and really get absorbed into the Windsor Clan. That’s what is already happening – she’s a duchess now, doing duchess business, and she has zero time for her garbage father.

What is professional cuddling?