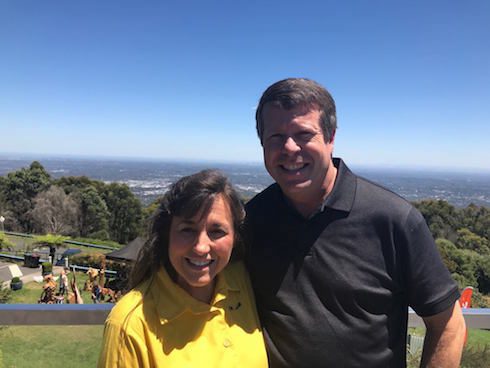 The connection between the Duggars and Michael Pearl, the controversial pastor whose teachings on parenting include child abuse, appears to be growing stronger.

Earlier this week, we reported on the two visits Pearl is scheduled to make to Fort Rock, a fundamentalist Christian “family camp” owned and operated by the Forsyth family, later this year. In the days since, the Duggars’ official Facebook page has been updated with an endorsement of Fort Rock’s 2018 calendar — and Fort Rock’s main page has been updated with a graphic featuring the Duggars, who will apparently be booked there soon.

Facebook fan community “Duggar Family News: Life is not all pickles and hairspray” (also known as Pickles4Truth) was the first to point out the connection between the Duggars and Michael Pearl through the Forsyths. We’ve taken a screenshot of the Duggars’ official Fort Rock endorsement rather than embed it directly: 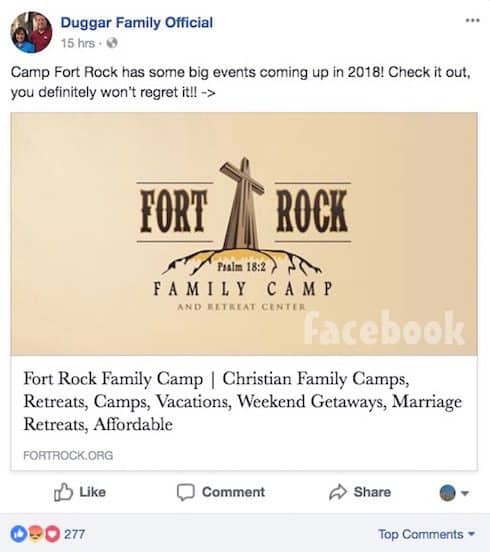 And here’s the Fort Rock “Coming Soon” graphic featuring both the Duggars and Michael Pearl — on the far left and far right, respectively:

Duggar Family News went so far as to speculate regarding any financial connection between the two parties — other than, of course, “the business/marriage transaction between their children, Austin and Joy.” (The Duggars have appeared at Fort Rock before, and also offer a testimonial on the camp’s page.)

Michael Pearl’s more controversial teachings — most of which appear to stem from his 1994 book To Train Up A Child, best known for being found in the homes of three children who were beaten to death by their parents — include hitting disobeying infants with a switch starting at four months old; establishing a militaristic atmosphere in the home; and responding to a biting child by pulling the child’s hair.

And, in one late section, Pearl draws up a disciplinary scenario in which the parent succeeds by comparing a son who’d been teasing his sister to Hitler (formatting retained from the original):

Try this approach. Calmly say, “What’s going on here?” He responds, “Oh nothing we’re just playing.” Daddy says, “Sister, are you having fun?” She says, “No, he won’t let me blow up my balloon.” Daddy says to the boy, “Are you having fun?” He looks abashed and says, “Well, we were just playing.” Daddy asks, “Brother, was sister having fun?” “No, I guess not.” “Could you tell that she wasn’t having fun?” “Well, I guess so.” “What do you mean, you guess so? Did you or did you not think she was having fun?” “Well, I knew she wasn’t having fun.” “Were you having fun when your sister was suffering?” Silence. “Can you have fun by making someone else unhappy?” Silence. He looks at the floor. “Look at me. How would you like it if someone bigger than you treated you like that?” “I wouldn’t,” he answers. Then I would say my famous lines, “If everyone is not having fun then it is not fun.” “Son, you know Hitler and his men had fun when others were suffering. They laughed while boys and girls cried in pain. Do you want to grow up to be like Hitler?” In complete brokenness, he says, “No Daddy, I don’t want to be like Hitler. I didn’t mean to make her sad. Sister, I am sorry.” What great training! The brother and sister will go away bonded and sympathetic. The sister forgives because she has seen his repentance and feels sorry for his grief. She is drawn to him. He will be more protective of her. They both have been restored.

To Train Up A Child — co-authored by Michael Pearl’s wife Debi — is archived via A Christian Home. You can read the book in its entirety here.