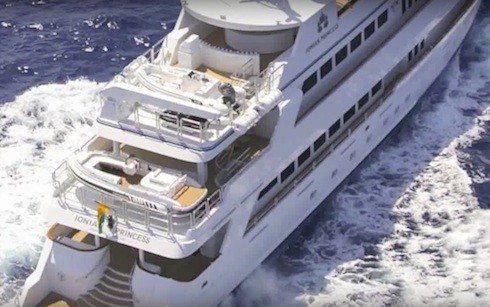 How much does the Below Deck Mediterranean yacht cost? More than almost anyone on earth can afford–fortunately, though, we have a new season of high seas antics to satiate our decadent cravings! Bravo’s Below Deck: Mediterranean is here with all-new antics, and an all-new boat: the Ionian Princess, a gleaming white yacht half a football field long and big enough for almost any party you can dream up. The price tag, however, might leave you breathless for all the wrong reasons…

So–first up, the bad news. According to the Ionian Princess‘ charter company, the absolute cheapest rate for the boat comes during a winter week in the eastern Mediterranean, which will set you back €145,000 Euros, or approximately $165,344 American dollars. If winter water temperatures aren’t your thing, you can come back for the summer rate of €165,000 Euro–a mere $188,150 US.

When you’re done laughing, feel free to take in some of the Ionian Princess‘ more impressive specs: the ship can accomodate 12 passengers, or you, your significant other, and your ten richest friends. (The week becomes a lot more affordable when you split it a dozen ways: “You can foot a $15,679.17 bill, right? Right? Guys?”). As BDM fans know, there is a trained chef on board, so every meal “is planned and prepared to your tastes and requirements.” There are also two dining rooms–one indoors, and one out; a proper office, for all the time you want to spend working while on vacation; and golden faucets in the shape of Greek birds. Plus, a hot tub!

Of course, there is one thing you might not realize unless you’re used to life in the lap of luxury–as a Bustle article points out, the ship comes with a crew of ten. Which means that, in addition to you, your significant other, and your ten richest friends, you’ll have a crew of ten more people, trained to anticipate your needs before you realize you have them, swarming gently about you like guardian angels.

Finally, here’s a look at some of the Ionian Princess‘ stately rooms. It looks like the IP was refit in 2016–just in time for her Bravo closeup–so some of these shots might be a bit outdated. But it seems safe to say that the theme of general opulence will hold true:

To see more of the ship, remember to tune in to Below Deck: Mediterranean Tuesday nights at 9 PM on Bravo.

(Photo credits: How much does the Below Deck Mediterranean yacht cost via Bravo, NJCharters.com)