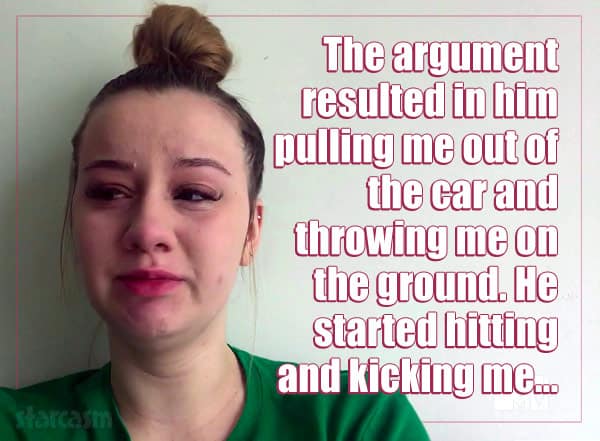 As we exclusively revealed earlier this month, Teen Mom: Young and Pregnant star Kayla Sessler took out an emergency order of protection against her son Izaiah’s father Stephan back in late May. She later revealed that it was due to “domestic violence stuff,” but we didn’t know any details. That changed during Monday night’s episode when Kayla broke down crying while recounting exactly what happened.

Kayla revealed she had been out with some friends and called Stephan because he had taken her debit card without permission — much like he did with Kayla’s mom last season. Kayla went with her friend Annabelle to pick up her debit card, and she and Stephan started arguing.

“The argument resulted in him pulling me out of the car and throwing me on the ground,” Kayla said as she began to cry. “He started hitting and kicking me. And Annabelle called the police.”

MTV played a bit of the 911 call, as Annabelle told the operator: “My friend Kayla, her ex, like, kicked her and hit her.”

Kayla’s mother took photos of a large bruise on the back of Kayla’s upper left thigh: 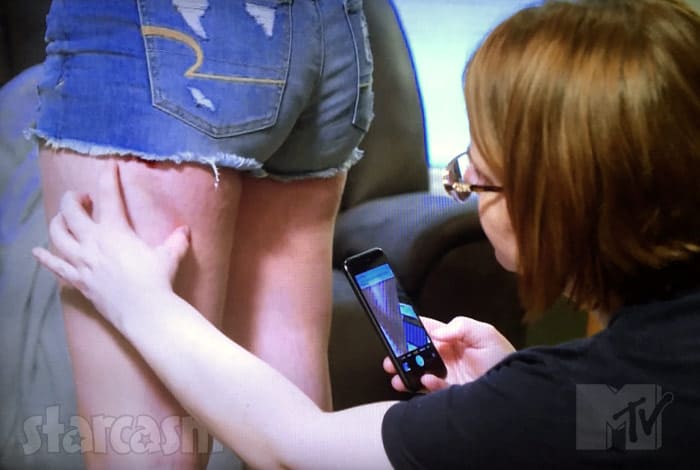 Kayla also revealed that Stephan kicked her car, leaving a huge dent in the front fender.

Police arrived on the scene and filed a domestic violence report, but Kayla told them she did not want to give her statement in front of Stephan. She went down to the police station the following day to give her side of things, but the officer said that it was going to be difficult to press charges for domestic violence.

Kayla was given information on how to file an emergency order of protection, which she promptly did. The emergency order was approved by a judge, and was good for two weeks. If Kayla opted to renew the order, it would have been good for two years. But, as we previously reported, the order was lifted on June 15, after Kayla did not show for the renewal hearing.

Despite dropping the order of protection, it doesn’t appear as though Kayla and Stephan are on the best of terms — and she says he doesn’t really see Izaiah much any more. From our previous post:

Kayla has moved on with her new man Luke, and things seem to be going great for the couple! “Izaiah adores him,” Kayla says. “He’s not trying to take Stephan’s place, but he’s going to step up where Stephan isn’t.”

Meanwhile, Kayla says that after she started dating Luke, Stephan began to take a step back as far as being a part of Kayla’s or his son’s life. “Stephan and I have no relationship,” Kayla says. “He doesn’t see Izaiah.”

Violence within a relationship is never okay.

If you or someone you know has been victim of domestic violence, help is available 24/7/365.

You can call the National Domestic Violence Hotline (@ndvh) at 1-800-799-SAFE(7233) or visit https://t.co/4WsBTzeiAE#YoungAndPregnant

TEEN MOM Kayla Sessler got protective order for Stephan in May