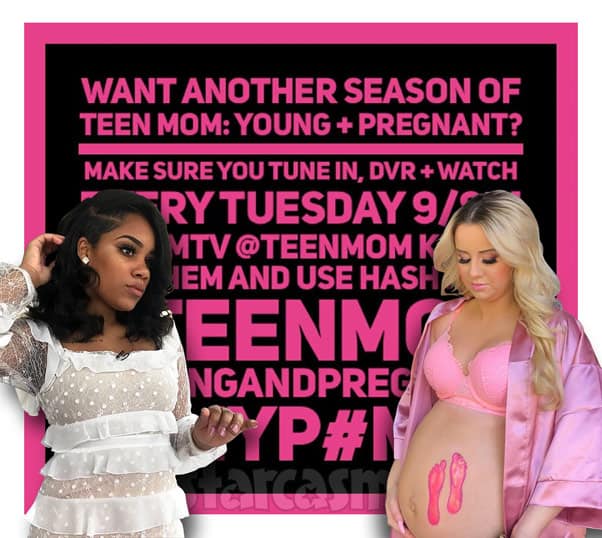 Fans of MTV’s Teen Mom: Young and Pregnant are up in arms this week after numerous cast members and people associated with production have been sharing the same text graphic suggesting that there may not be another season, or even a Reunion this season, if the ratings don’t improve. “Want another season of Teen Mom: Young + Pregnant?” the post asks. “Make sure you tune in, DVR + watch every Tuesday 9/8c! Let @MTV @TeenMom know! Tag them and use hashtags! #TeenMom #YoungAndPregnant #TMYP #MTV”

The plea to help save the show comes after multiple cast members have stated over the past couple weeks that they do not know if the show will be back or not. The not knowing seems especially concerning given that the current season is already fifteen episodes in!

So, how are the ratings for the show? Not good. Not good at all. However, there was a slight ray of hope last week, which may have been what inspired the social media campaign encouraging folks to tune in. (More on that in a minute.)

I will start with a brief overview of the show’s ratings since the very beginning. Teen Mom: Young and Pregnant premiered on March 12, 2018 with 666,000 viewers, which is pretty solid for a series debut. The ratings during Season 1 dipped a bit initially, but exploded when the show’s lead-in changed from Teen Mom OG to Teen Mom 2 nine weeks in!

The episode that aired after the Teen Mom 2 Season Premiere jumped from 609,000 the previous week to 854,000 viewers. The show enjoyed continued success for the remaining six episodes behind Teen Mom 2 as it averaged 851,000 viewers (minus Memorial Day weekend, which saw low numbers across the board.) Ratings peaked on May 21 when they cracked 900,000 by a hair.

I’m sure MTV was thrilled with the success of Teen Mom‘s youngest sibling as they announced it would be returning for a sophomore run in the fall. A little less than four months later, on October 15, the show returned for what MTV billed as Season 1b.

It’s my understanding that MTV’s confusing labeling of seasons is due to contractual concerns with cast members. As someone who has been writing about the Teen Mom franchise since the start, let me just say that it is stupid and confusing for fans and for public discourse about the show. MTV can label the seasons however they want, but keep that subset lettering nonsense in house. When I post about a new trailer that just came out, it is RIDICULOUS that there is ALWAYS a bunch of confusion about what to call it! Ugh. Sorry for the rant there.

It will probably only make things more confusing, but I’m going to break down the various seasons of Teen Mom: Young and Pregnant into 1, 2 and 3 instead of MTV’s 1a, 1b, and 2.

Season 2 premiered with a bit of a dip at 646,000, but it’s pretty typical for a show to lose momentum after a break. Unfortunately for the show, it was all downhill from there. Over the course of the 11 episodes, the ratings averaged just over 551,000 per episode. The Reunion episode then laid a golden turd with a paltry 223,000 tuning in. Of course, those numbers weren’t helped by MTV’s decision to air it on New Year’s Eve.

After seemingly rushing Season 2 to capitalize on the show’s initial success, producers took their time putting together the next run. They also shook up the cast a bit as they cut Lexi Tatman and moved Jade Cline over to Teen Mom 2 to replace Jenelle Eason. Casting for the show seemed to be focused on drama as they replaced the relatively non-dramatic Lexi with drama bombs Rachel Beaver and Kiaya Elliott. 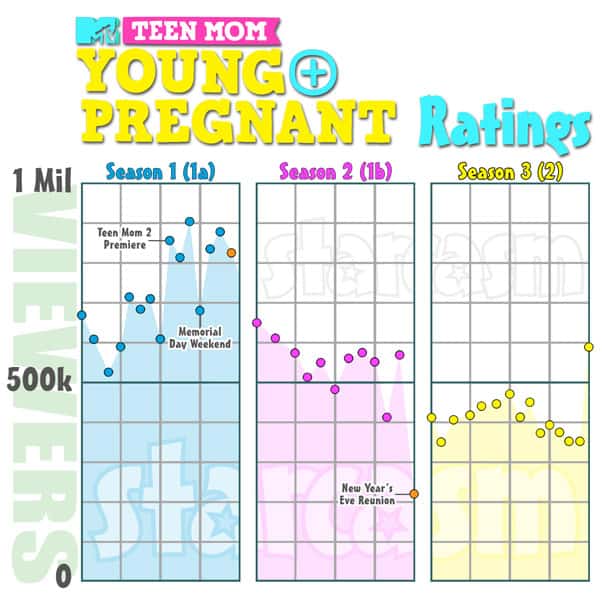 Season 3 premiered almost exactly a year after Season 2 on October 22. The ratings took another dip and fell to 410,000, which wasn’t too startling given the 12-month hiatus. It would be easy for the show to build on that number if viewers liked the show, and if there was a lot of buzz about it on social media.

Unfortunately for MTV, the ratings essentially flatlined, and actually went down over the course of the next 13 episodes. Teen Mom: Young and Pregnant Season 3 ratings averaged a paltry 405,000 through 15 episodes. The first four episodes of 2020 didn’t have another established Teen Mom show as a lead-in, and the ratings for those four episodes averaged only 370,000 viewers. That’s REALLY bad.

As I’ve stated in pretty much every post I’ve done about show ratings over the past few years, especially MTV shows, the ratings game is a lot different now. There are numerous streaming platforms, DVRs are more common than ever, and networks like MTV offer a lot of their shows via their apps, which are not included in the Nielsen ratings. That being said, a non-competition reality show with five different shooting locations probably isn’t going to be viable with ratings this low — even with other online revenue streams.

I should also mention that the show’s low ratings aren’t due to people being tired of reality shows featuring teen parents. TLC’s Unexpected, which is roughly the same age as Young and Pregnant, is kicking ass in the ratings with more than a million viewers per episode on average. The most recent season featured multiple episodes with more than 1.5 million viewers tuning in!

I stated earlier in this post that there is a ray of hope for Young and Pregnant. In a bit of a surprise, last week’s episode saw a rather sizable bump in the ratings. 511,000 people tuned in, which is the highest number for the series since the Season 2 finale more than a year earlier.

I noticed that Siesta Key, which airs alongside Young and Pregnant on MTV on Tuesday nights, also saw a large bump in the ratings. That got me curious, and then I remembered that Tuesday night was Donald Trump’s State of the Union address! Even though Donald Trump is essentially turning Washington D.C. into a trashy reality show, it would make sense that there was a ratings bump for shows like Teen Mom and Siesta Key for people not interested in the Trump ‘n’ Pelosi Show.

Regardless, getting more than 500,000 viewers must have raised a few eyebrows at MTV! I would imagine that if the show was averaging above half a million that it would have a solid chance of a renewal. My guess is that the bump in the ratings triggered some optimism among producers and network execs, and that trickled down to the cast and others associated with the show. Thus, the text graphic plea for views.

As far as the potential for a Reunion, it’s a little surprising that it is still up in the air at this point because they normally would have already filmed it. Obviously, a sustained ratings boost could convince MTV to throw something together in a hurry. To be honest, I would GREATLY appreciate a Reunion that wasn’t filmed more than six months prior.

#TeenMom #YoungAndPregnant dad Bar (aka Bariki Elimu Lockettsmith?!) has confirmed that he was recently arrested with a frustrated response to his mom Shen's numerous posts about it. Get a full recap of all the social media drama over the past couple days! https://t.co/prKCUlQ5N3 pic.twitter.com/xPSyXN9212

In summary, the text graphic is right. If you want a Teen Mom: Young and Pregnant Reunion and/or a new season, then more people need to be tuning in. Unfortunately, the message is probably just preaching to the choir in that most of the people seeing it are more than likely tuning in already.

We will be checking the ratings for this week’s episode and will update once the numbers are in. Do you think the show will be able to maintain it’s State of the Union level, or will it drop back down to the season average?

UPDATE – The ratings for the new episode are in, and the viewership fell right between the State of the Union episode and the season average as 438,000 tuned in.

UPDATE – The February 18 episode ratings seems to suggest that the numbers are flattening back out. 405,000 tuned in for that episode.

UPDATE – The Season Finale numbers were up, but will it be enough to save the show? Click the link in the tweet above for a final breakdown of the numbers!