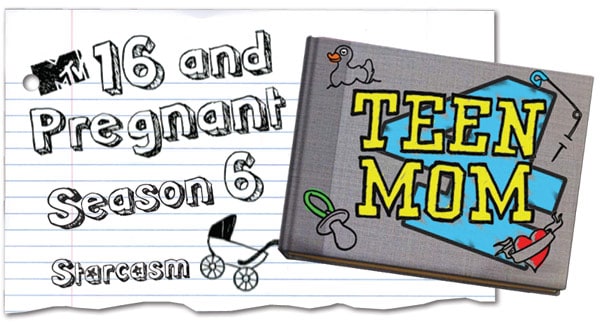 We posted last week that MTV is currently filming in south New Jersey for what looks to be either 16 and Pregnant or a new Teen Mom series. After our initial story, we had numerous people from the area contact us with what seemed to be conflicting reports about the identity of the mom-to-be, but it’s starting to make sense now that we are hearing MTV is filming between four and five moms from the area!

In addition to the tips, we have also seen photos of multiple moms in the Cumberland County area being filmed — and the film crew(s) has been connected with MTV by multiple sources, including local business owners where scenes were shot.

If that mash-up concept sounds familiar to you (as it did to me) it’s because MTV announced back in January of 2015 that they were bringing 16 and Pregnant back with a revamped, multiple-mom format. From our post:

“We are retooling 16 and Pregnant,” head of MTV programming Susanne Daniels says. “We decided to try something new. 16 and Pregnant was stand-alone episodes [in the past] and we are going to use the Teen Mom format for 16 and Pregnant this season.”

Daniels points out that “closed-ended programming” has its advantages, mainly because you can re-air episodes at any time that begin and end within an hour or two. So MTV can easily fill a time block on Saturday night, for instance, with a single episode of 16 and Pregnant — at least how it used to be formatted.

Why change things up now after five successful seasons? “We find that the Teen Mom ratings build over the course of the season as people get invested, so we thought, ‘Lets just look at that with 16 and Pregnant and see how it goes.’”

So the end result will essentially be a Teen Mom 4 with brand new moms that MTV viewers have not met previously on individual 16 and Pregnant episodes. That explains not only the reports that MTV might be considering a brand new installment of Teen Mom, but also the reports that they would be filming the new moms for a longer period of time.

Having a group of young moms (and dads!) who interact more than just at reunions would certainly put a new spin on the Teen Mom franchise format, giving it more of a Real Housewives kind of vibe. Personally, I’m a HUGE fan of the multiple unconnected narratives because it allows for a nice variety — but I confess I would be intrigued to tune in to a Teen Mom 4 or Teen Mom New Jersey that featured pregnant teens from the same area. (And I imagine that costs would be dramatically lower for the production company with the entire cast close together and near multiple metropolitan areas.)

Also refreshing would be jumping right into a full series instead of a single episode, as all the other moms did on 16 & Pregnant. With reports of up to five moms currently filming, I’m wondering if MTV isn’t just giving themselves some flexibility if they are unhappy (for whatever reason) with one of the moms. And if they all work out, then we will just have another Teen Mom 2 situation with five moms!

I think it’s also important to note that South Jersey is a lot different than North Jersey! North Jersey has more of the Italian influence that people (and reality TV cameras) usually associate with the state, but South Jersey is more connected to Philadelphia than New York City, and it’s not heavily Italian at all. In other words, this show will not be Jersey Shore or Jerseylicious meets Teen Mom — for better or worse. 😉

On another note, there is a young Youtuber named Mckayla who gave birth earlier this month and has stated that she is filming for a reality TV show. Here is her video from back in April where she reveals that the production company (Eastern TV) is looking for a fourth young mom to be due in June, July, August, or September:

Eastern TV is a pretty big reality show production company with a lot of ties to MTV’s Viacom sister network, VH1 — most famously a number of the Love & Hip Hop series. I did some research and found this casting call from Eastern TV’s Director of Casting posted on April 11: 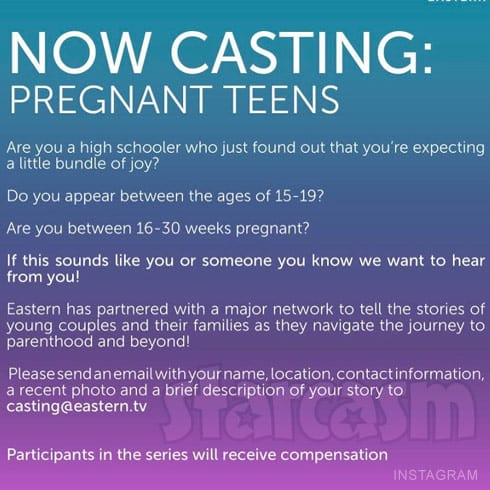 Mckayla is from Ohio, so she doesn’t appear to be tied to the group of New Jersey moms. And it is unclear if Eastern TV is the production company handling the New Jersey filming. It could just be that we will be seeing multiple teen mom reality series soon! Either that, or perhaps MTV is getting REALLY ambitious and plan to launch Teen Mom New Jersey and Teen Mom Ohio! (I’m just being silly, but who knows, right?)

I should note that it doesn’t seem like MTV would allow Mckayla to talk about filming on her Youtube channel — they usually try to keep their new cast members quiet.

We will keep our eyes and ears open, and of course we’re always available for tips via Facebook, Twitter, or email at starcasmtips(at)yahoo.com!