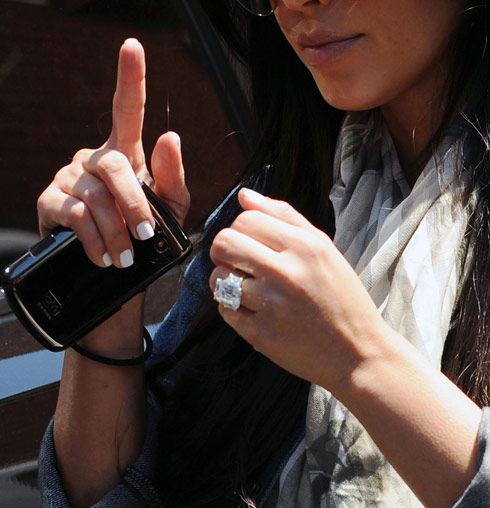 A bit of Kim Kardashian news sounded out today like the stroke of a gavel. It’s been confirmed that Kim’s estimated $2 million engagement ring from Kris Humphries (rumored to have been bought by the reality star herself) has sold at auction. So how much did someone pay for a sparkling forever reminder of 72 days of true love?

The hand-me-down Lorraine Schwartz bling, which features a 16.21-carat center diamond and two 1.8-carat side diamonds, sold at Christie’s New York City today to an unnamed online bidder for the price of $620,000. Christie’s markup is what brought the total sale above $700,000.

Last month it was confirmed that NBA baller Kris Humphries was going to sell the ring. The auction catalog for the sale noted that a portion of the proceeds will be donated to charity.

A source told Us in September,

“Kim has been waiting for the day he would auction it. Everyone always asked what Kim did with the ring — she silently gave it back over a year ago! And Kris waited until the divorce was final to sell it. The ring is definitely not worth $2 million, not even half of that.”

It’s cool that some of the money is going to a good cause and if the ring is close to what its estimated value was initially rumored as, somebody probably just made a nice turn on their investment.

How much money has Kim Kardashian’s sex tape made?