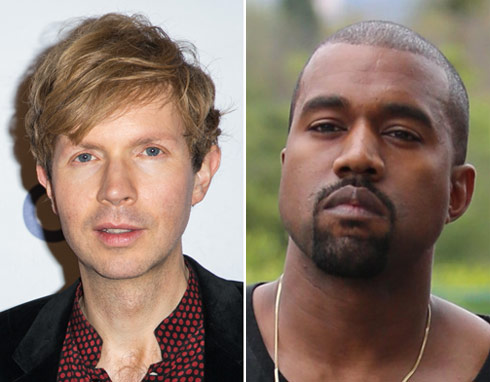 Last night a lot of folks got a good laugh (even Prince) out of Kanye West pretending to pull a Kanye when he faked a Taylor Swift moment while Beck was receiving the Grammy for Album of the Year for his fantastic LP Morning Phase .

It all seemed in good jest until West went full rant mode shortly afterwords in an interview with E! (via Billboard), revealing that he was kidding but not kidding:

“I just know that the Grammys, if they want real artists, to keep coming back, they need to stop playing with us. We ain’t gonna play with them no more. And Beck needs to respect artistry and he should’ve given his award to Beyonce. Because when you keep on diminishing art and not respecting the craft and smacking people in their face after they deliver monumental feats of music, you’re disrespectful to inspiration. And we as musicians have to inspire people who go to work every day, and they listen to that Beyonce album and they feel like it takes them to another place.”

Ugggggh… West is entitled to his opinion and all but this is beyond insulting to Beck who, even if he isn’t your thing, has been a consistent artist of the highest integrity – dedicated to his own vision and craft his entire career.

To hammer the point home, let’s get Kanye with some self-reverential, 3rd person-referencing quotegery:

“I’m not gonna do nothing to put my daughter at risk, but I am here to fight for creativity. That’s the reason why I didn’t say anything tonight, but you all know what it meant when ‘Ye walked out on that stage!”

Kanye’s old lady Kim Kardashian got in on the Beck bashing, while not as direct when she posted the following photo on Instagram:

This is the Beck won that award face?!?!?! pic.twitter.com/zKSmbK9awm

Beck was humble after hearing about Kanye’s thoughts. Here’s what he told US about West moving in on his moment, “I was just so excited he was coming up. He deserves to be on stage as much as anybody. How many great records has he put out in the last five years right?” When asked if he agreed that Beyonce should have won he answered, “Absolutely! I thought she was going to win. Come on, she’s Beyonce!”

As far as the insinuation that he doesn’t produce art worthy of recognition, Beck took that in stride too. “You can’t please everybody, man. I still love him and think he’s genius. I aspire to do what he does.”