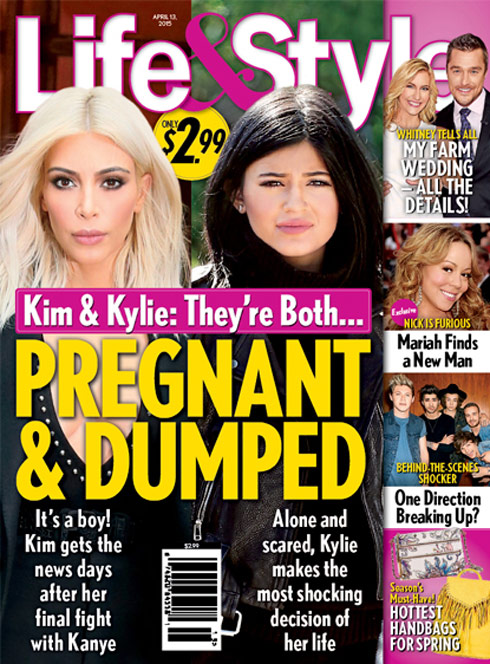 Forget professional baby daddy Jay Williams, no one has gotten more women pregnant than tabloid magazine covers! The latest inaccurate conceptions come via Life & Style, which takes the shotgun approach with their newest cover story by claiming both Kim Kardashian and sister Kylie Jenner are both pregnant. And just to add a little spice to the recipe, the magazine also claims both ladies are currently “dumped.”

According to the tabloid, Kim is pregnant with a boy after trying (very publicly) for a second child for a while. That doesn’t seem all that far-fetched, but things get a little wild when the article goes on to claim that 17-year-old Kylie Jenner is also pregnant, with the father being her now ex, 25-year-old rapper Tyga. “Kim never imagined Kylie would start a family so soon,” Life & Style‘s source says. “She can’t believe they’re pregnant at the same time.”

It seems that we and Kim aren’t the only ones shocked by the news of Kylie’s pregnancy. “The whole family is shocked,” the source says. “Bruce is beside himself.”

The source adds that Kylie is keeping the baby. “The idea of having [Tyga’s] baby only made Kylie feel more attached to him,” the source explains. “Kylie is insisting on keeping it.”

As far as the break up between Kim and Kanye, I have to confess I haven’t actually read the article. (I’m still waiting to get my issue in the mail!) But, judging from the cover, Kim has been “dumped” by Kanye West and she found out she was having a boy just days after their “final flight” together.

And since it’s still Throwback Thursday (in my time zone at least), here’s a previous Kardashian Pregnapalooza cover story from Life & Style that has one of my favorite headlines of all time: 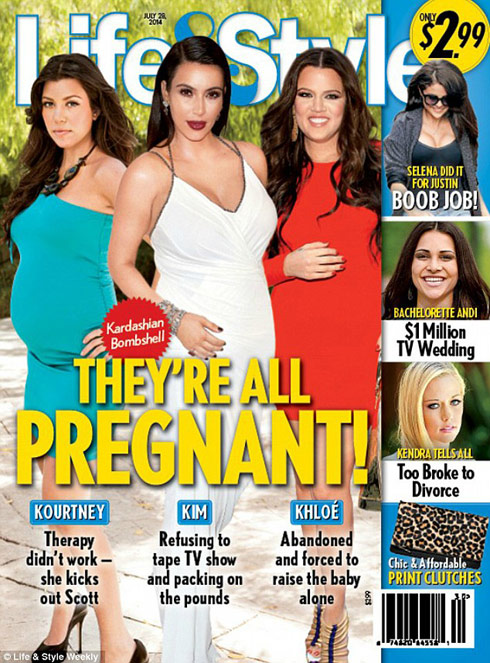 PHOTOS The Kardashians’ Christmas card for 2013 is most bizarre yet