Beyoncé lovers, Beck defenders: fight each other no more. Thanks to Soundcloud user Beckyoncé, you can both dance to the same song. Behold the greatest mashup of 2015 (so far).
Read More... 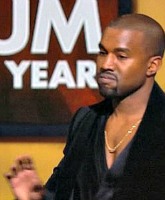 Speaking to Ryan Seacrest today about interrupting Beck at the Grammy Awards, Kanye West was a bit more complimentary toward the Best Album winner -- and offered up a slightly concerning explanation for his actions.
Read More...
It turns out that Kanye West was kidding but not kidding last night when he nearly repeated his infamous Taylor Swift Grammy sabotage after Beck won for Album of the Year for his fantastic LP Morning Phase. Get a masterclass in classlessness as a self-reverential, 3rd person-referencing Kanye rants about why Beck needed to give Beyonce the award, see how his wife Kim Kardashian joined in on the uncalled for shade and read Beck's tactful and humble reply.
Read More... 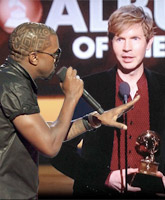 In a night full of memorable moments, the most memorable (or meme-orable) from the 2015 Grammy Awards was perhaps missed by most viewers as it happened in a split second. In case you missed it, Kanye West nearly pulled a Kanye West as he jokingly began to recreate his unforgettable Taylor Swift 2009 VMAs moment after it was announced that Beck had beat out Beyoncé, Ed Sheeran, Sam Smith, and Pharrell Williams to take home Album of the Year honors. Keep reading to watch the clip!
Read More...
Read More...
Read More...
We use cookies to ensure that we give you the best experience on our website. If you continue to use this site we will assume that you are happy with it.OkNoPrivacy policy