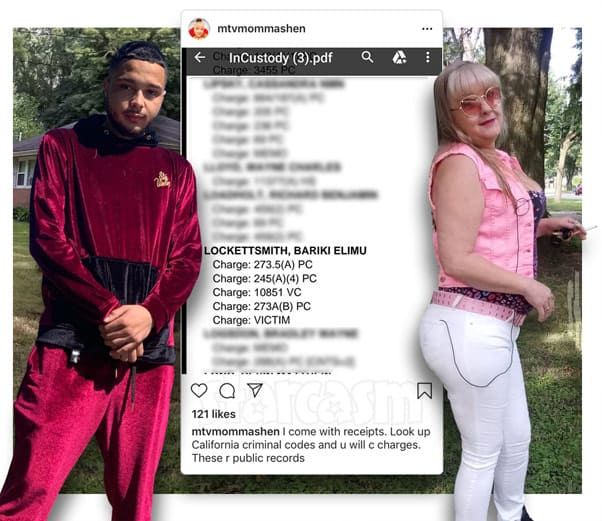 Teen Mom: Young and Pregnant grandma Shenandoah “Shen” Williams is no stranger to spilling a little behind-the-scenes tea, and this week was no exception as she revealed to her social media followers that her son Bar was arrested last month in California after an altercation with Ashley. Shen says the whole thing started because Ashley was driving while intoxicated, but resulted in Bar being hit with numerous charges, including assault and child endangerment!

As is often the case with Shen going on a tea spilling spree, there was a back story leading up to it. The most recent episode of Teen Mom: Young and Pregnant featured a scene in which Ashley’s mom Pastor Tea played a recording of a phone conversation she had with Shen. The conversation didn’t go well, which caused some issues with the planning for Bar and Ashley’s daughter Holly’s second birthday party.

After the episode aired, Ashley did a Q&A with her Instagram followers, and of course the subject of Shen came up due to her “appearance” on this week’s episode. Ashley’s comments about Shen were less-than-flattering to say the least. Among the things she said was that Pastor Tea did more to raise Bar than Shen did.

The drama-stirring denizens of the internet made Shen aware of Ashley’s comments about her, and that’s when Shen decided to start boiling some water.

Shen posted a screen cap of the Stanislaus County Sheriff’s “In Custody” report (above) that included Bar’s name and his charges. (Unbeknownst to me, it appears as though Bar’s last name isn’t Smith but either Lockettsmith or Lockett-Smith. His full name is apparently Bariki Elimu Lockettsmith.)

The charges listed are summarized below:

Despite the quantity and the seriousness of the charges, Shen says it was all Ashley’s fault. “She was drunk driving and they got into it,” Shen said of Ashley during a lengthy Facebook live stream. “She attacked him. He was scratched up — scratches all over his neck, everything.”

After they got into a scuffle, Shen says Bar tried to leave, but Ashley took his keys. “So he took her car,” Shen continues, “and when he got back, the police drew down on him and charged him with stealing her car.”

Bar also caught the two assault charges because of the alleged scuffle, and the child endangerment charge because Holly was reportedly present when it happened.

#TeenMom #YoungAndPregnant dad Bariki "Bar" Smith has been released from jail after Friday's arrest for domestic battery. He makes no apologies for bein' a gangsta: https://t.co/66Nw04pT0T

Just like the last time Bar was arrested following an altercation with Ashley, he called Shen to bail him out. And just like last time, she did. But, when Bar got out, Ashley was there to pick him up.

Shen also says that she submitted a lot of documents (including the failed restraining order filing by Ashley, as well as the video of Ashley slapping herself and then claiming Bar hit her) to the D.A.’s office and that prosecutors have since opted to drop the charges against Bar.

I’ve tried to confirm Shen’s claims about Bar’s arrest, but so far I haven’t been able to. That being said, everything points to Shen telling the truth — including reactions from Ashley and Pastor Tea on social media talking about it. Plus, if the charges were dropped, that would explain the difficulty I’ve had finding any court records about it. (I have reached out to the appropriate police department and I’m waiting to hear back.)

UPDATE – Bar has since responded to Shen’s posts and confirmed that he was arrested. His response has been added near the bottom of this post.

Shen says that Bar’s call from jail was the last time they spoke. She’s been texting and calling him, but he’s not responding. She says Bar and Ashley have since moved in together.

Shen talked further about her broken relationship with Bar during her Facebook live stream:

I’ve tried everything! you think I don’t want to see my granddaughter? I don’t even have a relationship with my seed because of this sh*t! This show was the worst thing. And I knew it though. I didn’t wanna do it, and my son begged me and said it would help feed his daughter. And then he still don’t really do sh*t for her! He uses me and his sister like we’re his side b*tches. And then he goes right back to running us. [responding to unknown comment] I’ve tried baby. Me and Bar? There is no me and Bar. My son is gone boo! The sh*t that he said, the sh*t that he done ain’t cool.

And speaking of Shen talking with producers, she says that they have told her that they are still waiting to find out if the show will be renewed for another season.

Some commenters questioned Shen about why she decided to air out her son’s business on social media, and she offered up her explanation. Here it is without editing:

Umm he is on TV and it will be aired period and my reasons r huge and I’m tired. I’m tored of the calls to my phone I’m tored of the illegal recordings the harrassmemt they on the show and I get attacked they have defamed me my own child has lied and created this shot show. He set me up over and over again. He has lied on his entire family telling them people things that r not true. And now he has put Holly in danger with a pedaphile so y’all go tell him and them to stop. I’m tired and am breaking my silence because that got me nowhere but stalked and harrassed.

#TeenMom #YoungAndPregnant star Ashley Jones is seen slapping herself before accusing her fiance Bar of abuse in deleted Instagram video! Watch the startling clip: https://t.co/FPhg5CDWE0 This is going to BLOW UP and @MTV will have to address it soon. #staytuned

Bar hasn’t offered up much of a public response, at least not one that I have seen. [See update below!] I did find a comment left by Ashley on one of the numerous Instagram posts about Shen’s claims. “Can’t argue with someone living at the Budget Inn,” Ashley wrote. “I won’t do it. 😂”

There is an Instagram account (@thats_the_teaa_sis) that reportedly belongs to Pastor Tea. The account has been all up in the comments section of numerous Teen Mom Instagram accounts reporting on Shen’s recent claims. The comments are just so juvenile and offensive that I want to be 100% certain the account is actually run by Ashley’s mom (and not some 10-year-old troll with a foul mouth) before attributing quotes to Pastor Tea. And for me to say that in a post with a lot of Shen quotes is really saying something!

#TeenMom #YoungAndPregnant Shen says Pastor Tea went after her son @BarikiSmithMTV with a taser the night he was arrested! Plus, Shen and Bar reignite their feud with much 🍵 being spilled: https://t.co/NARS1E8OfP pic.twitter.com/YfFUjPTELT

UPDATE – Bar has since responded with a couple text graphic posts on his Instagram story. Here is what he wrote:

The fact that my mom went back on her word and spoke on the situation where I was arrested is not cool, but what’s worse is the fact that all of the sh*t she said was way away from the truth and what actually happened, and the fact that holly is being spoke on is worse. Stop listening to that sh*t that’s continuously being said mfs need to grow up at this point.

I don’t agree with any of this sh*t but the lies being told ain’t where it’s at especially not about my child and a personal situation that took place between me and Ashley.

Yes I called her cause when I went to jail because I had just fought with ashely [sic] so I didn’t know who to call and of course it back fired. 🤦🏽‍♂️

All this sh*t old and dry at this point sh*t need to be dead and everybody just go to they corners eventually, hopefully.

#TeenMom #YoungAndPregnant's Shen un-quits, says she has signed a contract to return to the show in hopes of repairing her relationship with her son Bar and granddaughter Holly: https://t.co/cg0hfpdUZ5 Welcome back @Carteblancheetc! #ThatsShentertainment

UPDATE – Shen posted a text graphic on Instagram iterating that Bar has never abused Holly, and also that Holly was actually asleep during his and Ashley’s scuffle. She continued in the comments section:

This was never about exposure it’s about me being attacked defamed called a liar. My whole reputation bashed. No one seems to realize I have been stalked harrassed defamed attacked physically emotionally and phone blown up for over a month. My 9 yr old has been threatened, sexually exploited online. My whole family defamed. My son has fueled this with his lies on all of us. So I’m sorry if u don’t understand but my silence got me attacked more. High road low road it doesn’t matter they will come for me. Mtv has taken part using illegal recordings violating my privacy rights and my son set up the call and all the other situations along with MTV so if they leave me alone stop using me and harrassing me they don’t have to worry about me period. Good morning back to life. And stop saying o said holy was molested never have I said that and not one of u can show proof cause it never happened.

I took my role in it when I started this mess bit me speaking on what I went thru does not justify her sexually exploiting a child it does not justify the threats of a child the racial slurs the defamation love thos started long before show they made up to much stuff for storyline used courts in there game police and that’s just a piece. Me speaking on my child and the sh*tty shut he has done to his own family does nor justify the sick insane abuse of children and my family . I don’t do ahow I’m not cast and u don’t know what has gone on behind closed doors. They blew my phone up for a whpleobth in December. I kept quite and that didn’t work I tried to make peace that didn’t work I owned my part in the beginning and they got worse now mtv is using illegal recordings for storyline. Bar even takes part in lies and the madness. But I will ahow u all soon. I’m not wrong here. Racial attacks sexually exploiting children threatjebg violnce on a child and promoting violence against women is never justified. U clealry don’t know what’s actually happening here this is way beyonf a fake story line and some name calling love.