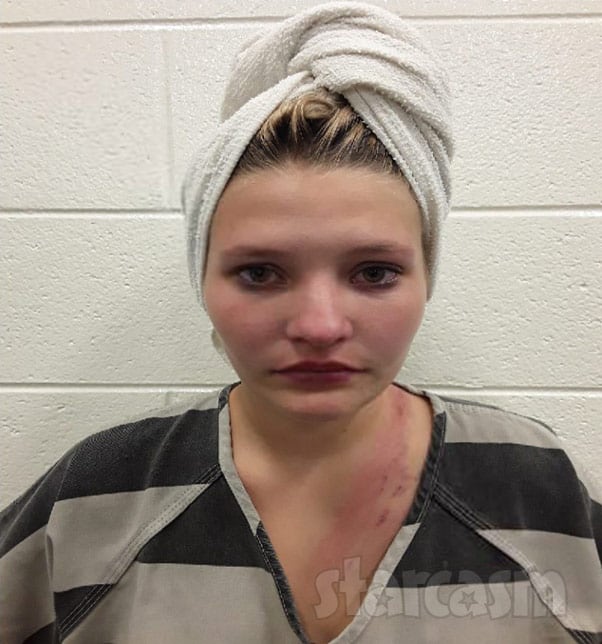 The troubles continue for the Beaver family from MTV’s Teen Mom: Young and Pregnant. Rachel Beaver’s older sister Malorie Beaver was back behind bars in Tennessee earlier today after being charged with underage drinking and juvenile driving while intoxicated.

According to jail records, 20-year-old Malorie (actual spelling is Mallorie, as we mentioned after her previous domestic assault arrest earlier this year) was booked just after 5AM. She bonded out later the same day.

There are reports online that her arrest came after a car accident, and that report looks to be verified by Malorie’s mug shot photo. You can see what appears to be some scrapes and marks along her neck and shoulder — right where a seat belt would be.

I don’t believe Malorie, Rachel, or their mother Stephanie have posted about Mallorie’s arrest or reported accident on social media.

UPDATE – It has since been confirmed in the police report from Malorie’s arrest that she was in an accident. She has also already been sentenced! Click the link for all the latest!

As mentioned above, Malorie is no stranger to the Monroe County Jail. She was booked for domestic assault in early February after an altercation with her grandmother Janice Bollen. According to Janice’s account in the police report, the altercation took place after Malorie arrived home inebriated at approximately 11:13 PM.

Janice said that Malorie “went into the bathroom and fell into the door waking up her child causing her to cry.” Janice picked up Malorie’s infant daughter Emerson in an attempt to comfort her, but Malorie insisted on taking the child. Janice “reluctantly” conceded, despite concerns about Malorie falling.

Malorie then took Emerson into the bedroom where the child continued to cry. Malorie eventually returned the little girl to Janice in the living room. More from the report:

#TeenMom #YoungAndPregnant The alleged victim from Malorie Beaver's assault arrest this weekend was her and Rachel's grandma Janice! Get the details from the police report, plus Malorie and Rachel's video reactions! https://t.co/5yj3d2vfXZ

[Janice] advised [Rachel] began being loud and it scared the child so she wanted to sit in her lap which hurt Ms. Beaver’s feelings. She advised Ms. Beaver began saying bad things about her and then grabbed her arm in an aggressive manor twice. Ms. Bollen stated she advised Ms. Beaver not to grab her again or she would contact police and Ms. Beaver told her to go ahead and continued to be verbally aggressive toward her.

The officer on the scene states in the report that Malorie did “appear to be intoxicated due to her being unsteady on her feet and having slurred speech.” It states that she was also “uncooperative” when asked about the incident.

Malorie was eventually arrested and taken to the Monroe County Sheriffs Office without incident. She was charged with domestic assault and was released the following day after posting $1,000 bond.