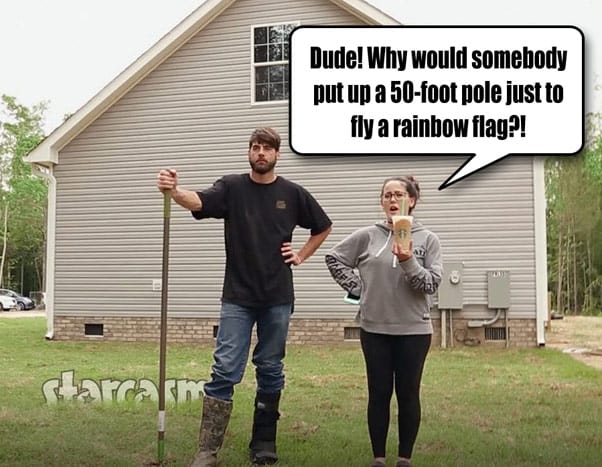 Former Teen Mom 2 star Jenelle Eason has reportedly reconciled with her controversial husband David Eason, and she was spotted this week back home in North Carolina. Jenelle’s apparent return to The Land right around Groundhog’s Day seems fitting because it appears that we are all in store for at least six more weeks of Eason drama!

For those dedicated drama lovers out there who want to do more than just follow along online, you can now own a front row seat to ALL the craziness because the property across the street from The Land is currently for sale!

Here is the description of the available property from the listing:

10 Acres Vacant / Wooded Land with 500 ft. Paved Road Frontage. Land is 25 miles (25 minutes) From Wilmington NC. This Land is great for investment, has many possibilities including development or Possible Home Site.

Don’t think I’m trying to oversell or bamboozle you either. This property isn’t just near The Land on the other side of Money Hole Rd., it is LITERALLY across the street!

Here is a labeled screen shot from Google Maps showing the available lot, as well as the lots owned by David and Jenelle. David and Jenelle actually own four lots, three of which (including the one with their house) are directly across the road: 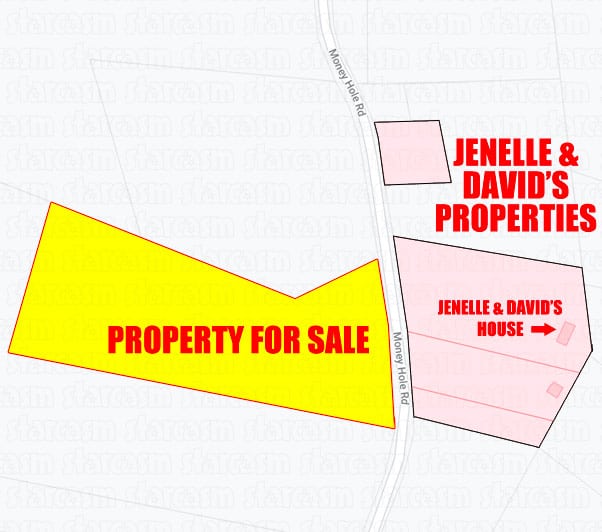 So how much will it cost to immediately be able to camp out across the street from The Land on your own property? Only $47,400! That seems pretty cheap, right? It’s actually down from the original price of $49,900 when the property was initially listed 142 days ago.

Unfortunately for the nosy Nancys, David and Jenelle’s house sits pretty far back from the road behind a number of trees, so the view probably wouldn’t be that great. But still, you would be the very first to know any time the police or Secret Service showed up, or when a pet got shot.

I can already see the Hatter GoFundMe campaign to raise money to buy the property and construct a massive digital billboard that is programmed to display in real time every tweet with the #JusticeForNugget hash tag. That would be pretty amazing, but I think I have a much better idea.

10 acres is quite a bit of land, and my idea is to build a themed tourist attraction! In the spirit of Disneyland, Legoland, and Opryland I would call it The Landland. Here are just some of the great things you could find at The Landland:

• The entrance features a very tall tower structure with a rooftop restaurant looking down on The Land.

• The restaurant would serve doughboys as well as their signature $5 drink: homemade ice water.

• In addition to the homemade ice water, another huge money maker for the restaurant would be quarter-a-view tourist binoculars mounted on every table with a clear view of The Land. For 50 cents you would be able to use the binoculars to live stream on any number of social media platforms for 30 seconds.

• Of course there would be numerous photo booths for taking souvenir photos. One would include a cardboard standee of Kieffer Delp wearing his signature green hoodie that you can pose with for “I seen ya wif Kieffuh!” pictures. Another would have the infamous Brunswick County Jail booking photo backdrop so you can pose for your very own Jenelle-inspired mug shot photo! 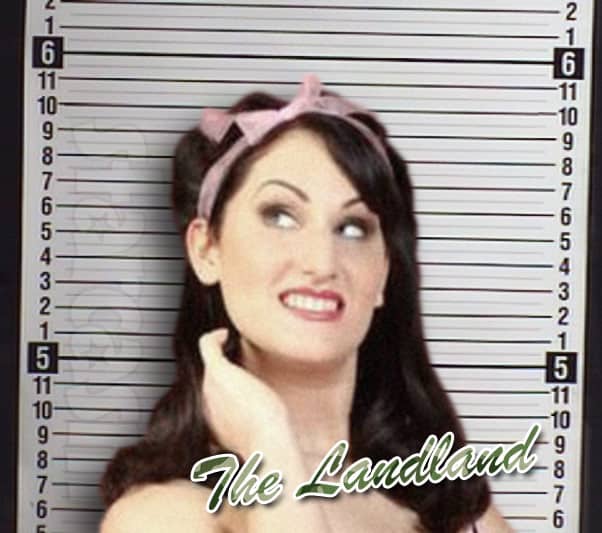 • The Landland would have an arcade with numerous online shooter games, as well as their very own driving game called Road Rage in which you and your child chase down other drivers and threaten them with guns.

• My initial thoughts would be that you could have helicopter tours of The Land, but there might be some serious insurance issues flying over David and his arsenal on a regular basis.

• The “Hall of Exes” would feature robotronic versions of all of Jenelle’s exes as they act out iconic scenes from the show. “STOP IT!” “Being a felon ain’t illegal!”

• All of the bathrooms would be family friendly and equipped with Little Kaiser urinals.

• The gift shop would feature an endless supply of Jenelle and David-themed merchandise including hair feathers, fake hillbilly beards, $12 generic eyebrow kits, “Alnost Fanous” temporary tattoos, dry erase boards that read “___________ is forever my soul mate,” numerous styles of top hats, magnetic “talking words” kits for your refrigerator, Jenellopoly games where all the Chance and Community Chest cards are “Get out of jail free,” and fireworks that look like Pothead Haircare products.

• If the GoFundMe does well enough, there would be a terrifying roller coaster simply called “Jenelle’s Life.” I honestly don’t think I would be brave enough to ride it.

I started listing off these features as a joke (obviously), but by the end I was REALLY excited to visit The Landland! Y’all need to make this happen dude!