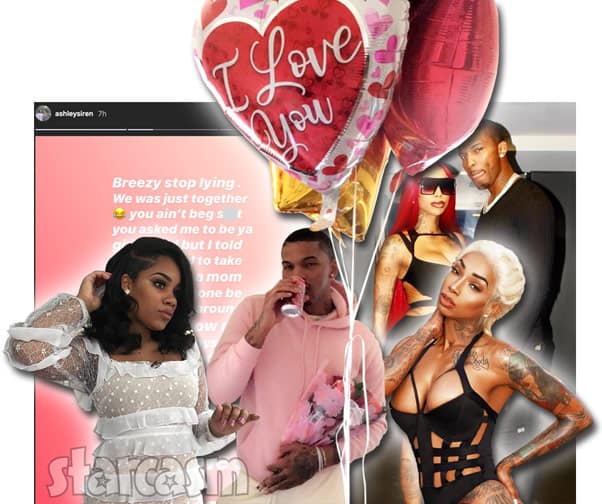 Sky from Black Ink Crew revealed that she is dating rapper 600 Breezy as the two attended the BET Hip Hop Awards together on Sunday. The only problem? 600 Breezy was just dating Teen Mom: Young and Pregnant star Ashley Jones — like four days earlier! Needless to say, Ashley WAS NOT HAPPY!

As our readers are well aware, Ashley and 600 Breezy have been an item since at least May, and possibly from as early as February. The two went to see Detective Pikachu together in May, essentially confirming their relationship.

But they were getting Instagram flirty back on Valentine’s Day. That’s when Breezy posted the photo above, in which he’s wearing a pink hoodie with balloons and flowers. “Show up at yo door like ‘hey bae’???,” he wrote in the caption. “But you didn’t tho ?,” Ashley replied. Antonio smoothly answered her with: “watch this ?”

Fast forward eight months and Ashley and 600 Breezy are still an item. The two shared some racy photos and videos late last month, and their hotel rendezvous even stirred up some drama with Shen, the mom of Ashley’s ex Bar. In a series of angry tirades, Shen lashed out at Ashley for taking daughter Holly with her to Los Angeles where she was meeting up with Breezy. “U wanna let every tom dick and Harry hit your business but don’t bring your baby with u to get f**ked in a hotel!!” Shen wrote. Shen also lashed out at MTV for letting their cameras roll throughout. “MTV puts these babies [in] unsafe situations for ratings,” she claimed.

Ashley responded to Shen’s claim with an irate tirade of her own. In the Instagram live video, Ashley pointed out that she had to bring Holly along because Bar bailed on watching her. Here’s a transcript of part of what Ashley stated in the video:

If he woulda watched his daughter, he woulda had her ass, and she wouldn’ta been around this ni**a. Now that’s all fact and no [cap?]. So you can run and tell his ass dat! Tell his mama dat! [A man’s voice can be heard in the background.] Cuz he was supposed to keep his daughter. We agreed that he was gonna keep his daughter, and the day before he calls me and says, “Well, you goin’ down to LA to hoe. I ain’t takin’ — I ain’t watchin’ her! I ain’t watchin’ her!” Yeah, ni**a, so I brought my daughter with me.

Ashley later shared some additional details in the comments section of one of Shen’s Instagram posts. “Holly was safe and my friend wasn’t playing step dad. And at no point was he left alone with her. Soo I’m dating other people. What’s the issue ? I thought she’d be happy.”

The 600 Breezy and Ashley Jones fairy-tale romance came crashing down on Sunday when Breezy attended the 2019 BET Hip Hop Awards as Sky’s plus one. In addition to photos of themselves at the event, there were numerous videos of the couple getting quite intimate at an after party. The videos included Sky grinding her Blackinkadonk on Breezy, and Breezy doing his best slow motion motorboat routine on Sky’s cleavage.

Ashley responded to the images and videos from this weekend with some less-than-favorable remarks about 600 Breezy. She then revealed that she was going after the rapper on his own turf by dropping her own rap song!? Here’s a preview clip posted by Ashley, but be forewarned that it does contain foul language:

Turn it into art ? dropping soon

A commenter stated that Ashley knew what she was getting into when she started dating Breezy. “Everybody clout chasing,” Ashley replied. “I’m just jumping on the bandwagon.”

Meanwhile, 600 Breezy clapped back at Ashley with a video in which he revealed that he “begged” her to be his girlfriend, but all she wanted was sex:

I need to address this sh*t one time…Ashley, I begged you to be my girlfriend. I begged you to be with me. You wanted to f*** casually, and I kept speakin’ on that sh*t, like, nah. I wanted to be witchu, and you said how much you got goin’ on with your baby daddy and all that sh*t, all them problems. You droppin’ songs and sh*t. Like, you look like the last b*tch. Like, I never disrespect you because I f*** with you, but you know I tried to be your ni**a and you ain’t want that. You talkin’ ’bout space and all that sh*t. Like, motherf***er didn’t have no money to travel. Like, you know? Like, it never — it shouldn’t of been no issue. So, you makin’ songs, goin’ all that sh*t. Mmmmm. Let that sh*t go, you feel me? I coulda been your man. 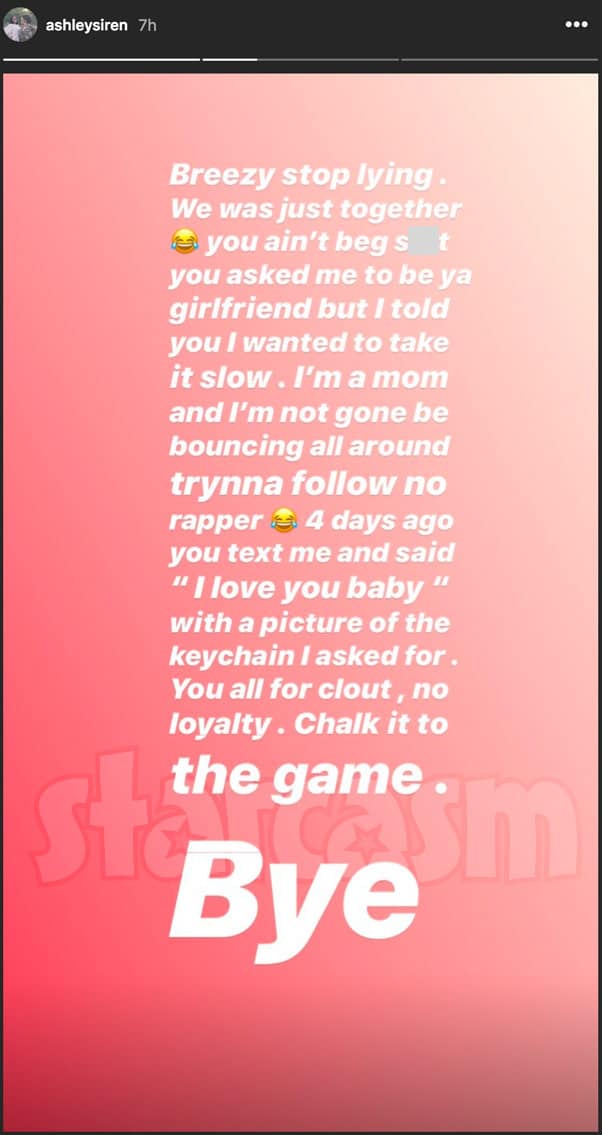 Breezy must have realized that admitting he begged Ashley to be his girlfriend only to be turned down because she just wanted sex might not be the best thing to say while starting a new relationship. So, he posted an apology video addressed to Sky in which he attempted to backpedal a bit:

Breezy captioned the video by writing: “I’m her Man… not her boyfriend so ima be a man an apologize when I’m wrong.?”

So far, all the public drama is between Breezy and Ashley. Sky has yet to respond directly to Ashley or Breezy. However, on Monday she did tweet something that may have been directed at Ashley:

Of course, given how Breezy was begging Ashley to be his girlfriend and she just wanted to use him for sex, perhaps it was a message for him?

If Sky’s warning was for Ashley, she seemed to heed it. When someone tried to entice Ashley into saying something negative about Sky on Instagram, she shut that down quick. “You want me to have a issue with Sky so bad and that’s weird,” Ashley wrote. “What the f*** does Sky owe me, I don’t know her. So please stop, cause ain’t nobody scared, but I don’t need to beef with females over men. Period.”

Ashley’s (maybe?) ex Bar has remained fairly quiet as well. But he seemed to be quite thrilled when the drama made it’s way to The Shade Room on Instagram! “Never thought of the day I would see my baby mama on The Shade Room ???” he commented.

Sky joins Black Ink Atlanta as manager: Will she be on the spin-off?