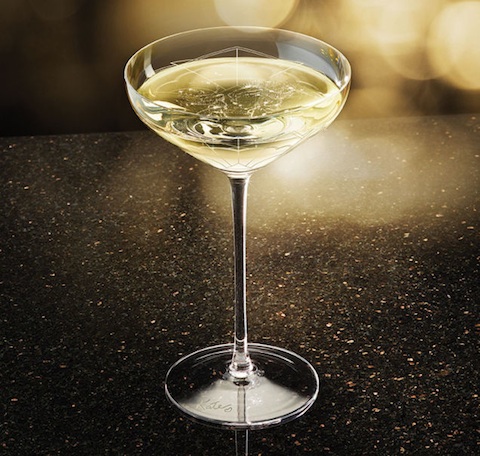 How are they doing this? Why, they’ve commissioned noted sculptor Jane McAdam Freud to create champagne glasses from a mould of Moss’ left breast.

Moss herself will be on hand to reveal the glass during a gala affair at 34 this fall. And it will be available for public–ahem–consumption starting on October 9th, at 34, plus related eateries The Ivy, Daphne’s, Scott’s and The Club at The Ivy.

All are based in London.

The model’s thoughts on the matter? From Moss’ official statement:

I was excited to participate in this project–what an honour to be alongside Marie Antoinette–she was a very intriguing and mischievous character. Champagne is always associated with celebration and happy occasions and I had fun creating this beautiful coupe.

Moss refers to the legend that Marie Antoinette’s breast was used as the mould for the first Champagne coupe. It’s a good story, but one that’s long-debunked: the first coupes (also known as Champagne saucers) were designed in England in 1663.

That’s about ninety years before Marie was born, and eighty-ish years before she had breasts from which moulds could be made.

No word yet on why Moss’ left breast was chosen over the right.