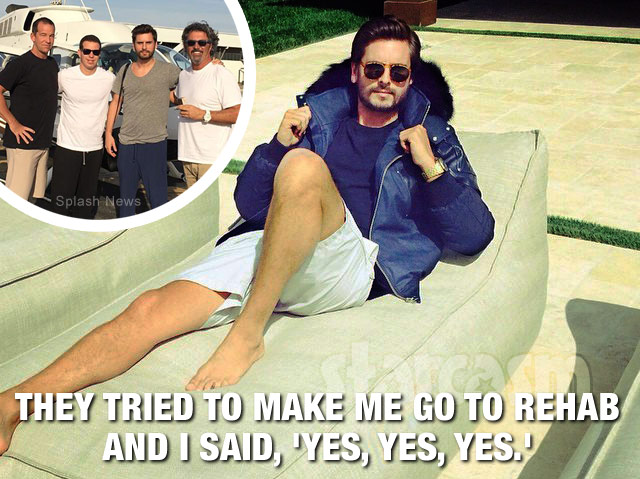 As we previously reported, Keeping Up with the Kardashians star Scott Disick checked into a high-end rehabilitation facility in Costa Rica earlier this week after a very public booze-fueled weekend in Atlantic City. The news had many fans concerned about the young adult romance book cover model‘s well-being as his history of alcohol and drug abuse has been well-documented on the show, but new reports suggest that Scott’s stay is just a publicity stunt for the facility (which opened last month) and he is actually getting paid — BIG BUCKS!

“He is 100,000% getting paid (by the facility),” and insider tells the New York Daily News’ Confidenti@l. “The rehab center even sent a press release about him,” the insider continues. “Why would they do that if he was not getting paid? They have to adhere to strict confidentiality. He’s pulling down big dollars on this one. I heard mid-six figures.” 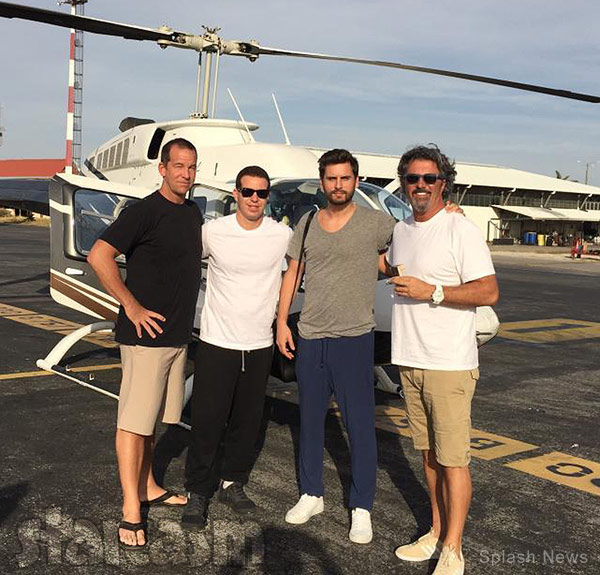 In the photo above you can see Scott Disick after his free helicopter flight to Costa Rica with Rythmia Life Advancement Center CEO Gerard Powell, Dr. Jeff McNairy, and Jeremy Geffen.

I’m usually not much of one for conspiracy theories, but this makes all the sense in the world. If you opened a luxury rehab facility and wanted to get some free press, how would you go about it? OF COURSE you would recruit some high-profile clients! Although I’m guessing this sort of situation usually calls for merely offering complimentary use of the facilities and staff, if you want to land a star from the planet’s most talked about high society reality show, then you’re going to have to pay an appearance fee at least, right?

And I can so imagine Lord Disick being approached about the idea. “Wait. You want me to pretend to [or actually] go on a very public booze bender, have Kris email a tip to TMZ, then hop on a helicopter and chill out at a luxury rehab resort in Costa Rica for a while? And you’re going to pay me how much? Alright, let’s go to rehab!”

And if the whole thing is just publicity/marketing stunt, then it is a win/win for everyone because it will also provide an entertaining plot line on the new season of Keeping Up with the Kardashians.

I’d like to find something wrong about this whole alleged arrangement, but it’s not like anyone is getting hurt, and I really don’t think it lessens the importance of those who suffer from addiction being able to get help, so what’s to get upset about? Scott, you enjoy your paid Costa Rican vacay, and Rythmia Life Advancement Center, enjoy the free publicity from our millions of readers! 😉

(Oh, and if your facility treats celebrity gossip addictions, then make me an offer and I’ll be happy to write about my experiences there.)