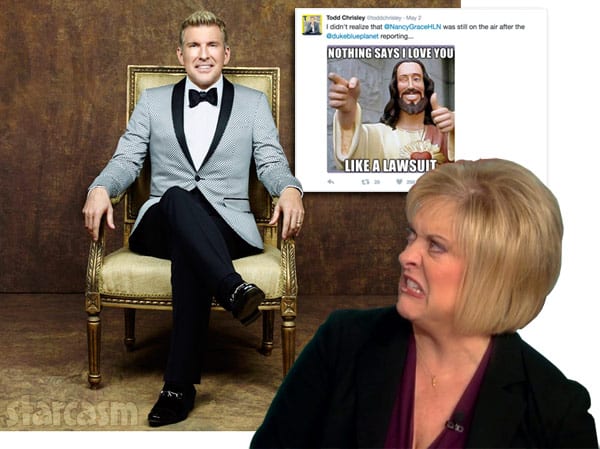 Nancy Grace’s brand of boisterous, judgmental, hyperbolic sensationalism often manages to stir up a few hornets’ nests, and this week she’s got the Chrisley Knows Best family buzzing about a lawsuit after she linked the family to welfare fraud in Monday night’s episode.

“Multi-millionaire reality star of #ChrisleyKnowsBest lives a life of luxury,” Nancy tweeted in a tease for the episode, “but could his family be receiving welfare?” What Nancy was referring to is the arrest of Angela Johnson last week for Medicaid fraud. Angela is the estranged ex of Todd Chrisley’s estranged son Kyle Chrisley, and the mother of Todd’s granddaughter Chloe — who lives with Todd and his family and is featured on Chrisley Knows Best.

The tease for the episode sent the Chrisley family into a Twitter tizzy as they began to lash out at Nancy for implying they receive government assistance of any kind. “Nobody in our family is,” wrote Todd’s son Chase Chrisley, adding “you must be really desperate for ratings.”

That sparked this little Twitter conversation between Todd and a couple Chrisley Knows Best fans:

FAN: She’s irrelevant Chase. Why bother with her?

TODD CHRISLEY: Exactly, stop making her relevant by mentioning her name, that’s what she wants.

FAN: I didn’t know she still have a show.

TODD CHRISLEY: No one else did either based on ratings. 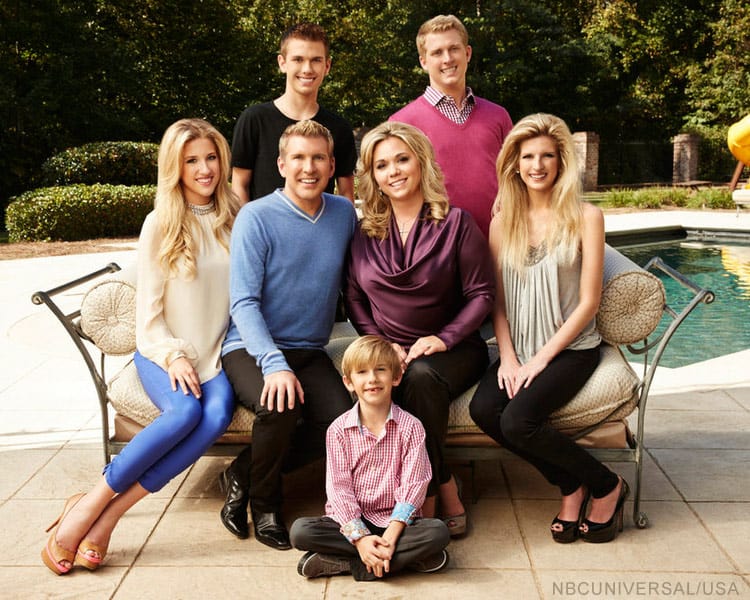 Todd and other members of the Chrisley family continued to lash out at Nancy Grace (more on that below), including Todd mentioning some of of Nancy’s past controversies. In this tweet he enlists the assistance of Jesus and suggests that he might be filing a lawsuit against Nancy:

I didn't realize that @NancyGraceHLN was still on the air after the @dukeblueplanet reporting… pic.twitter.com/GA8NeQ5X5f

According to The Real Mr. Housewife, the family IS moving forward with a lawsuit against Nancy Grace, and they plan to use attorney “Mad Dog” Marty Singer, who is perhaps the most infamous defamation attorney in the world.

Through extensive research, we have learned exclusively that the Chrisley family is planning on taking legal action against Grace for her slanderous and flat out lies via her claim that they are on welfare benefits. The family, we have learned, has retained Marty Singer, who is one of the most powerful Hollywood and Entertainment lawyers in the business.

TRMH spoke with Todd about the Nancy Grace episode and he adamantly denies ever receiving ANY sort of government subsidies for himself or his family. “I grew up in a middle class family with a Mother who worked 12-14 hour days to support her family,” Todd says. “We never received a dime from any form of Government subsidy.” He adds, “I also have five children, and never in my 48 years have I ever received a dime for them from the government either.”

Todd goes on to say: “For Nancy Grace to insinuate something like that and use Chrisley Knows Best and the Chrisley name/notoriety to try to lift her show from it’s lackluster ratings will not be tolerated.”

It should be pointed out that Nancy Grace is an attorney and I’m sure she and the producers of her show are very careful about what they say. You will note that she doesn’t claim that the Chrisley family committed welfare fraud in her tease, she merely asks if they did. I tried to find the full episode online, but had no success, so I don’t know if she made any statements on the show that could be proven to be untrue. If there is a lawsuit filed, I’m sure we will know more specifics about exactly what Nancy Grace said that could be considered “slanderous and flat out lies.” Until then, here are more of the angry reactions from the Chrisley family on Twitter:

@brahey93 @NancyGraceHLN you have to pray for this woman , she's a bitter soul .

@HallmanAmy yet she's speaking about someone who isn't in my family , her behavior isn't a reflection on us, poor Nancy , ratings low?

Mirror mirror on the wall who's the most basic of them all…. She is ?? @NancyGraceHLN ??

??? @NancyGraceHLN glad we came in clutch for your below average ratings. pic.twitter.com/6PAjKuPqyk

Everything about this heifer is busted. ? https://t.co/uJqmNkv3RE

. @NancyGraceHLN , struggling for those ratings huh? Glad we could with you lies …

Does anyone take @NancyGraceHLN seriously anymore?

. @NancyGraceHLN Bruh you garbage, you should really get your facts straight and stop talking out of your ass

Shocking that @NancyGraceHLN was accused of embellishing a story, Worry less about my money& more about my ratings. pic.twitter.com/ZKfLuhaUbw

Who the hell goes on dancing with the stars and only has 8k followers ?

I mean , I don't know who ran faster , the viewers when the tit fell out or her followers…

@JPrice02 thx for your prayers but I don't pray for satan…

UPDATE – Todd Chrisley and his family got some public support from an unexpected source: The Real Housewives of Orange County’s Tamra Judge! It seems Tamra had a previous run-in with Nancy Grace that almost had her filing a law suit as well! From Tamra’s Facebook page:

Good for you Todd Chrisley this woman is an evil cow. She did something really nasty to me and I thought about taking her to court but didn’t want to give her any energy. I don’t know how she gets away with the stuff she does? Everyone knows you’re a hard working family man. ‪#‎ChrisleySueYourAss‬ ‪#‎bittersoul‬ ‪#‎getheroffTV‬

LHHNY Juelz Santana prison sentence on firearms charges: When will he get out?