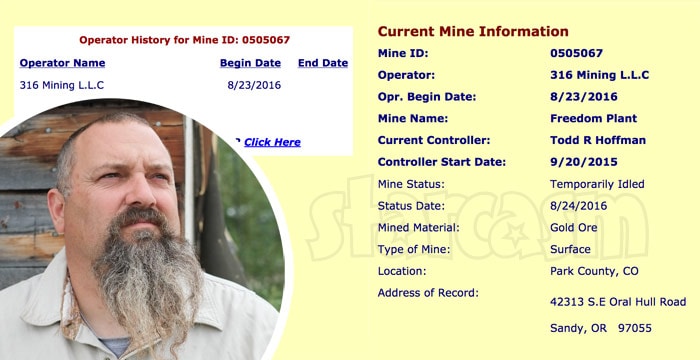 On the current season of Discovery’s popular Gold Rush reality series, Todd Hoffman and his crew of miners have left the Canadian Klondike behind and returned to their home country and home state of Oregon to mine for gold at the High Bar Mine. As viewers saw in the two-hour premiere, prospects are not looking good for the Hoffman Crew as their first couple of clean outs were worse than disappointing.

Even after lots of prayers and helmet knocking, the future of the Hoffman’s Oregon mining experiment looks to be in jeopardy of turning into another fiasco similar to their infamous expedition to Guyana. However, according to information uncovered by some diligent Gold Rush researchers, it appears as though the fate of the Hoffman Crew is not completely tied to the state of Oregon! As first posted on the Gold Rush Alaska Gossip Facebook page, online records indicate Todd Hoffman and 316 Mining, LLC finished out the 2016 mining season looking for gold in Colorado!

After doing some further research, I can confirm that 316 Mining, LLC is listed as the operator of the “Freedom Plant” gold mine in Park County, Colorado. Todd Hoffman and his crew officially began operating the mine on August 23, 2016 — which would be WAAAAY late in the 2016 mining season.

As far as the exact location of the Hoffman’s Colorado gold mine, that is still unknown. Although there was a commenter on the GRAG Facebook page who indicated that the Hoffmans were in Fairplay, Colorado. Googling “Fairplay Colorado gold mine” turns up this amusing story, which may be a bit of foreshadowing of what might happen when Todd and his crew arrive in town.

Also of interest is that the mine is listed as “Temporarily Idled” and has seven outstanding citations that have not been assessed yet. I’m no mining expert (kinda like Todd Hoffman), but that doesn’t sound good at all. 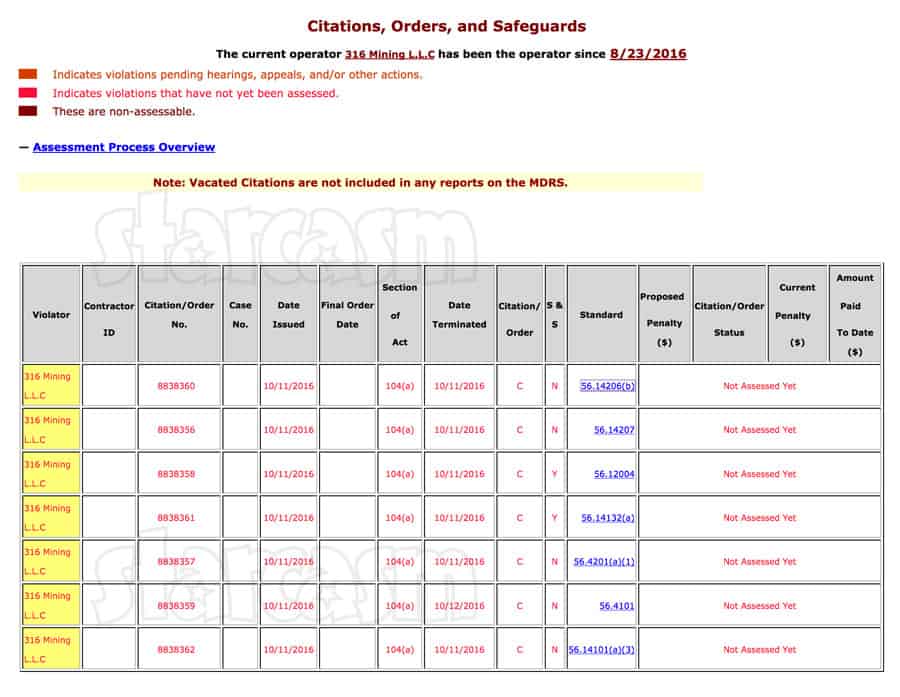 Unfortunately, I couldn’t find any reports online that indicated just how much gold was retrieved at the “Freedom Plant” gold mine, so if the Hoffmans do pack up and move to Colorado this season, their fate is still unknown — although I’m fairly certain that if Vegas let you gamble on the Hoffman’s fate I know how most folks would place their bets.

On a strange side note, of the two mines that are registered to 316 Mining in Oregon (Portable Low and Portable High), the reports indicate there was a total of 19 “operator hours worked.” That seems barely enough to cover what we’ve seen so far this season! I have no earthly idea what to make of that.

To find out whether or not Todd Hoffman and his crew do leave Oregon behind for the golder pastures of Colorado, be sure to tune in to new episodes of Gold Rush airing Friday nights at 9/8c on Discovery!

Gold Rush: How Did Dakota Fred Hurt get the Hoffmans’ Claim at Porcupine Creek?