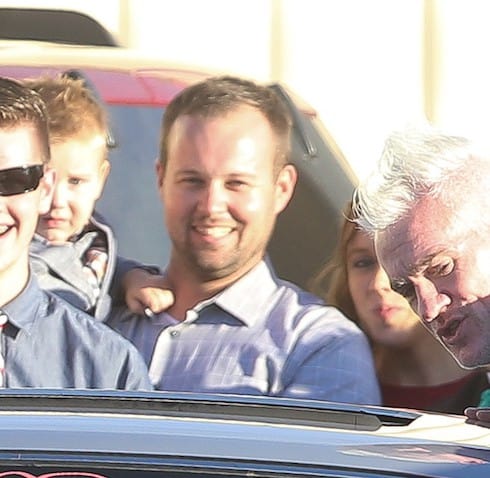 The latest Anna Duggar news is a bit of a muddle: she might be seriously considering divorce from her disgraced husband Josh, but, in the meantime, Anna’s managing to keep a bright public face on their marriage. A new report claims that the pair appeared far removed from all divorce speculation at Jinger and Jeremy’s wedding this past weekend–and it’s been buttressed by second, equally possibly likely report, one claiming that the pair have been trying for a new baby for quite some time.

In fact, Josh Duggar–seen above at the family wedding–made his first public appearance in months in order to celebrate Jinger and Jeremy’s love, and appeared to be all smiles throughout the ceremony. Nor was he the only one: a new Us Weekly article appears to have it on good authority that Anna also seemed to be in very high spirits throughout. The magazine even got a source to talk about Anna and Josh’s demeanor at the wedding; contrary to popular opinion, the two didn’t appear to be at odds with each other in the slightest. “Josh and Anna seemed happy,” said their source. “He had his arm around her. They were talking and smiling.”

Though that quote may seem innocuous, it does come on the heels of a separate report, one that alleges Anna and Josh have been spending their time since his release from sex rehab by trying for their fifth child together. They worked hard at conception “following [Josh’s] return from rehabilitation in March,” that report states, but baby No. 5 just didn’t come.” According to their take, Anna read no good omens in those tea leaves: “[She took it] as a sign from God that she should not have another child with Josh.”

Counting On continues to air Tuesday nights at 8 PM on TLC.