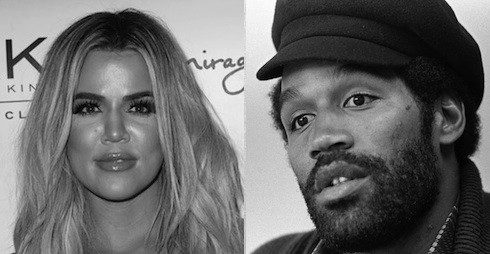 Khloe Kardashian and OJ Simpson have long been the source of rumors regarding their alleged blood connection, and a new report once again raises the possibility that the two are related. According to the latest rumors, Khloe herself has requested that OJ take a paternity test on at least one occasion, and could even be convinced that Simpson, and not Robert Kardashian, is her biological father.

Inquisitr is reporting the latest news on the Khloe Kardashian and OJ Simpson front: namely, that an interview subject in a new documentary about Khloe’s famous family knows she has asked OJ to take a paternity test, so her truth can be revealed. Prison guard Jeffrey Felix, of the Lovelock Correctional Center in Nevada, says he overheard the conversation between Khloe and OJ, which took place during one of Khloe’s apparent weekly prison phone calls to OJ.

“It was one of those conversations which involved her paternity,” Felix said. “She was very upset and OJ was trying to calm her down. One day I could hear Khloe screaming in the phone. He said she was upset because she wanted him to take a paternity test, because the media is all over him, to see if OJ is her actual dad – and OJ told her ‘no.’”

A second dispatch, this from Hollywood Life, appeared to back up the rumors of some sort of paternal involvement between Khloe Kardashian and OJ Simpson. “[OJ] pulled me up and asked me what I would do, and I told the Juice to take it,” that article quotes Felix as saying. “And he said ‘no.’ And I said, ‘Why won’t you take it?’ He said: ‘It’s a family matter, it’s none of the public’s business.’”

Khloe first brought up the possibility that she had been adopted in a 2009 episode of Keeping Up With The Kardashians. But the biggest source of the rumors regarding Khloe Kardashian and OJ Simpson–the spark that started the forest fire, as it were–appears to be a 2012 National Enquirer article. Since then, the fire flares up again about once a year; we gave it extensive coverage in 2013, when an old friend of OJ’s made the allegations to In Touch, and again earlier this year, when Khloe reportedly had a whole bunch of plastic surgery done so she could look more like the man rumored to be her birth father. According to those reports, that man was either OJ Simpson or Alex Roldan.

According to rumors that apparently begin with Khloe’s soon-to-be-ex-husband Lamar Odom, Khloe “knew she [doesn’t] have the same dad as her sisters.”