A few weeks ago on Kourtney and Kim Take New York Kim Kardashian was seen in a weird car scene with her mom Kris Jenner talking about problems she was having in her marriage to Kris Humphries. (This was the episode where they were in Dubai to open Millions of Milkshakes.)

There were a few things shady with the scene: the car windows were blacked out, and at one point when she’s supposed to be talking to her mom about the divorce, the camera pans away and her voice is completely different. The minute the strange segment aired, Kris Humphries took to Twitter with a cryptic tweet:

“I can’t wait for the truth to come out! People will be surprised or maybe they won’t. #FCC”

Now, new compelling evidence has surfaced that they actually filmed this scene in a studio in L.A., NOT in Dubai. Which explains why the windows were blacked out, but it doesn’t completely explain the strange inserted line (if they were already filming a staged scene, why didn’t they include that line? I’m guessing they decided the scene needed a little more when they got to the editing stage.)

Here is the evidence:

– The car windows were blacked out – who drive around like that?

– Kim Kardashian and Kris Jenner were snapped by the paparazzi leaving a studio December 6, 2011. Kim was wearing the same outfit in the clip, and an assistant was carrying Kris Jenner’s bright purple outfit.

(Image via our pals at Reality Tea🙂 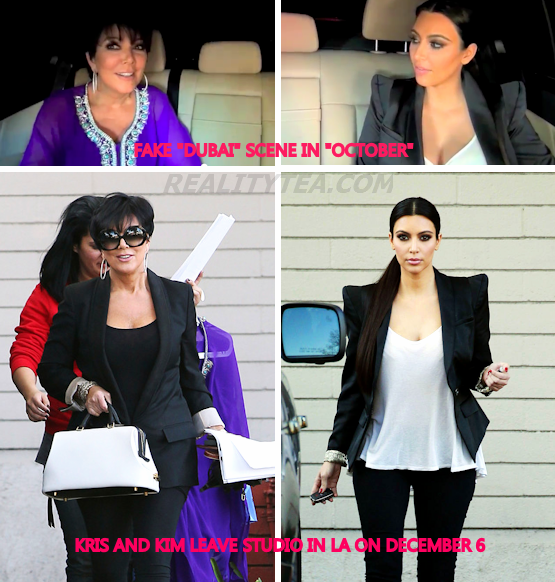 – The emotions are pretty flat and weird. Hollywood Life had a body language expert tell them that the conversation wasn’t genuine, but the rest of the human race, with our experience being human all our lives and interacting with each other, could tell you that as well.

– The crazy conspicuous voice change that jumps out at you like a freakin’ tiger escaped from the zoo. Watch the above video again, or for the first time if you haven’t already, and tell me you don’t notice that weirdness.

Here’s a transcript of the contrived conversation:

Kris: “Are you excited to get home to your hubby?”

Kim (while feverishly texting with her red nails): “Ehhh.”

Kim (in her signature voice fry): “I mean, not really. I don’t know, I can’t really explain it. Like I feel like a sense of relief that I’m here. I mean, I’ve been wanting to kind of talk to you about this, and I’ve like, just been afraid to like stress you out, but there’s something in my relationship that I just feel, like isn’t right.”

Camera pans to mom Kris, and abreahty, lower toned Kim (that kind of sounds like it may not be Kim at all) says: “I don’t know, I’m just like learning a lot of things about him that I didn’t really learn before (pan to Kim, who’s not talking, then back to Kris) and I don’t know, married life just isn’t what I thought it would be with him.”

Kim (who is talking on camera again, and back to her original voice): “I mean, is this like normal? Should I be feeling this way? I just feel like something like off.

Kris: “No Kim, it’s not normal. It really isn’t normal to feel like you don’t want to home to your brand new husband. This is the stage in your relationship where you should be obsessed with each other, and you miss each other.”

Kris: “Your dad and I were obsessed with each other. I didn’t want him to even go to work. I was so excited for at least 10 years. And the way I felt is the way you should feel. You should be so into the person that you’re married to.”

Now, this shouldn’t be extremely shocking, because A LOT of scenes on these Kardashian shows are really set up, and the conversation often seems fake. The thing that’s upsetting folks here is that it’s supposed to be a mother-daughter convo prior to Kim filing for divorce on Halloween 2011, and all the evidence points to the fact that it was filmed in December. That’s like a whole other level of fake, and makes it seem like Kim and Ko. are working overtime to present her side of the marriage implosion. To be fair to them, they might have had a similar conversation in Dubai off-camera, and felt like they wanted to recreate it for the show. Either way, the fakery of this scene is hard to conceal, and hard to believe they thought the audience would buy it, even without the paparazzi photos.

What do you think about this cherry on top of the divorce fiasco?