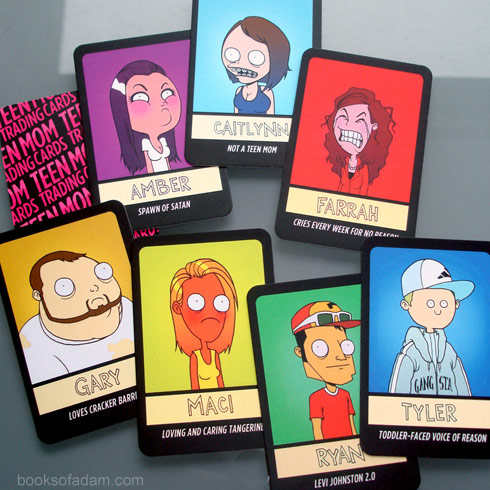 Do you have a Teen Mom fan on your Christmas shopping list and you have no idea what to get him or her? No need to worry because just in time for Black Friday artist Adam Ellis has released a set of custom Teen Mom trading cards!

There are seven cards featuring all the guys and gals from the original Teen Mom series with some rather fun and colorful caricatures of each along with a biting caption. (Well, except for Tyler.) Here’s the description from adamdraws.bigcartel.com, where you can buy your set now for only $9.99:

A set of trading cards featuring the cast of Teen Mom (the first season, aka the best season), printed on thick 16pt stock. Great print quality and a smooth satin finish. Trade with your friends!

Each set features seven cards, one of each cast member. The back of each card is monogrammed with the the trading card logo. Free shipping in the USA. Each set is printed to order, so allow 1-2 weeks for shipping. 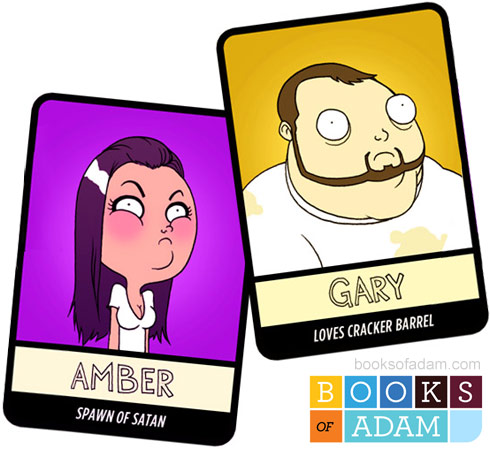 The idea for the cards was actually spawned over a year ago by Adam on his blog. In the post he reveals that he is a serious closet Teen Mom fan, although he makes it very clear his fandom isn’t necessarily a compliment to the young ladies on the show. (In other words he’s a self-professed “hater” who enjoys the show because of how much he dislikes the cast members.) To his credit, Adam seems quite self-aware of his drinking problem when it comes to Haterade:

“Teen Mom has proven to be a ratings powerhouse for MTV, but there’s only about another year left before the cast are no longer effectively teens. At that point I’m not sure what I’ll do. I’m a 24-year-old adult male, and I need my weekly outlet of naive teenage youths to pass judgment on. Otherwise I might be forced to confront my own shortcomings, and that’s just unacceptable.”

Here’s another photo of the other five cards, including Maci Bookout (Loving and caring tangerine), Ryan Edwards (Levi Johnston 2.0), Catelynn Lowell (Not a teen mom), Tyler Baltierra (Toddler-faced voice of reason) and Farrah Abraham (Cries every week for no reason): 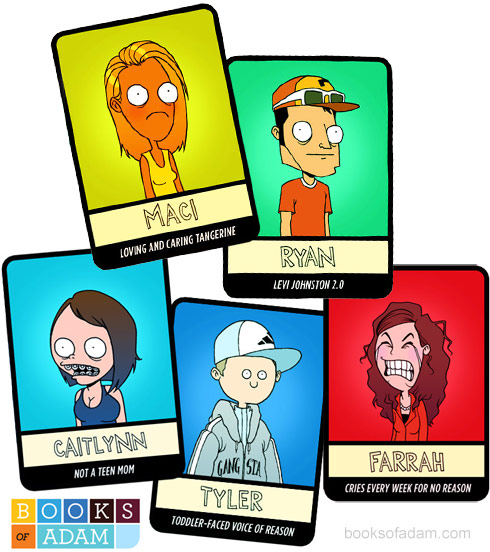 So what do you think of the cards? Are they a little too harsh? Or are they fun-spirited enough to justify the hate?

On a side note, I’ve always thought reality shows were missing out on the collectibles market! (Seriously!) I had the collectible cards epiphany for the Real Housewives franchise right after I discovered The Real Housewives of Orange County‘s Peggy Tanous had posed for a number of Bench Warmer pin up collectable cards back when her name was Peggy Tyler. The fun part is the fact that it wouldn’t be just the cast of the shows (although who wouldn’t want a Giggy rookie card?) but also the memorable moments and things! For example, the Teen Mom card set would feature a “Gary’s Belden Lineman Camp t-shirt” card as well as a “Tyler proposes” card. Catch my drift? I’m telling you, that would be addictive as heck! And I have even begun on novelty action figures and dolls!

Adam – you might want to get working on these now!