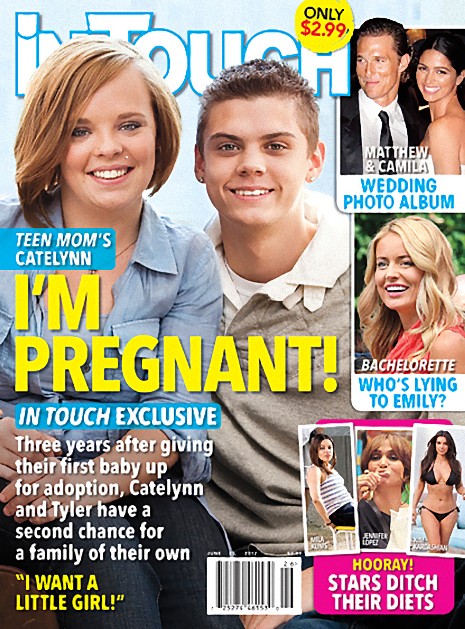 UPDATE: Not so fast! Catelynn revealed exclusvely to US Weekly that she is NOT PREGNANT! *Huge shocker* Catelynn says she’s never even heard of the name Jamie Pyrzewski in her life, and that someone probably made up the name AND the story to get a buck.

Catelynn told the mag that she’s on IUD (though she initially told them she was on the pill, the magazine spread she did for them explains that she’s using IUD,) and wants to wait until she’s finished school to start a family with Tyler: “Don’t believe everything you read, I’m definitely not pregnant! I’m on the pill. And, I’m only 20–I don’t want to have kids until I’m out of school and we’re married.”

That cover explains it all as far as the latest tabloid rumors circulating about Teen Mom Catelynn Lowell and fiance Tyler Baltierra.

According to In Touch Catelynn and Tyler are currently expecting their 2nd child. The source on this report is Catelynn’s longtime friend, 26-year-old Jamie Pyrzewski.

“She said, ‘You’re never going to believe it: I’m pregnant,’ We were both quiet. I asked how she felt about it. She said she was nervous and scared.”

According to Jamie she got a call about the news last month after Lowell had shared the news with Tyler and a small group of family members.

Another “insider” told In Touch that Catelynn was at first panicked and in “total denial” but that, “She is now feeling complete joy. This time, she knew immediately that she wanted to keep the baby. She’s just so happy.”

We did report a while back on the good news that Tyler and Catelynn’s daughter Carly has a new little brother. This one we can confirm.

Neither Catelynn or Tyler have responded to the In Touch report as of this post. [UPDATE – See above for Catelynn’s denial] The only thing that may have hinted at this was a tweet that Tyler, usually an extremely positive guy on Twitter, sent out on Saturday:

This false “breaking news” just happened to come out the day after the premiere of the 4th and final season of Teen Mom.