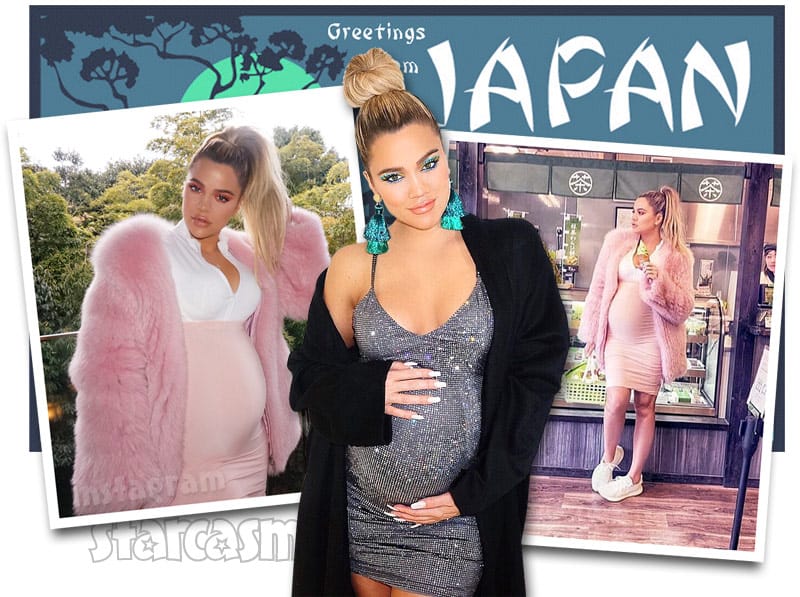 Eight-month-pregnant Khloe Kardashian is currently enjoying a babymoon vacay in Japan with her sisters Kim and Kourtney, and she has been more than generous sharing baby bump photos with her 73 million plus Instagram followers.

Khloe kicked off her Japanese baby bumpapalooza with two shots taken in what looks to be a marble shower stall. Khloe’s wearing a slinky, sparkly minidress that had her pregnant belly resembling a disco ball — in a great way. She added a full-length black overcoat, iridescent green tassle earrings and matching eye shadow with a tight bun finishing the look. Unfortunately, the second photo is intentionally granulated and super blurry: 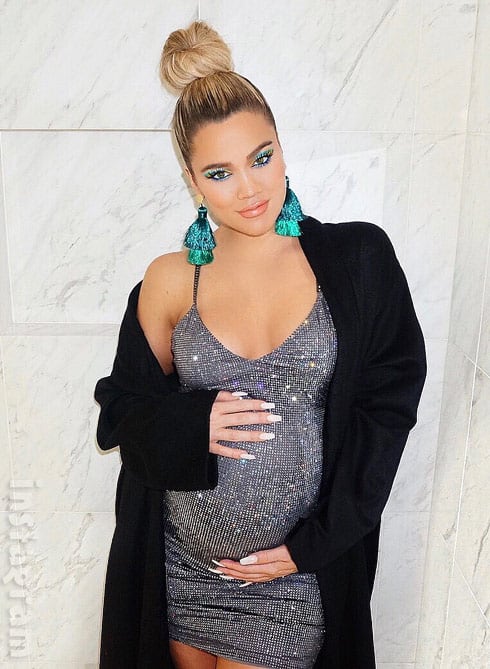 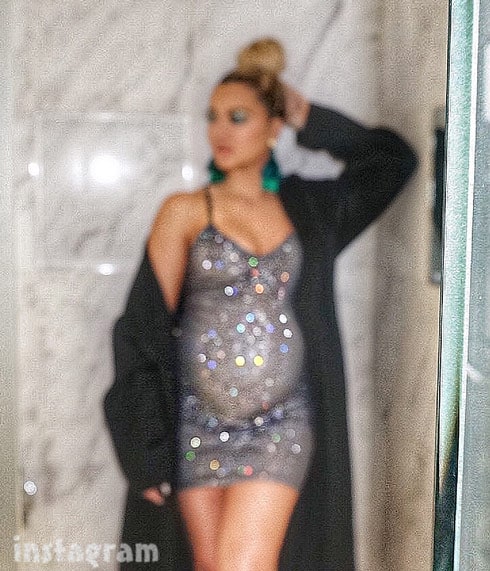 “What’s meant to be will always find its way,” the 33-year-old reality star and successful fashiontrepreneur captioned the photos above, sandwiched between two ? emoji.

Khloe let her hair down — literally — for her next look, which was a tad more casual as she sported a soft cerulean blue dress with matching sneakers and an off-color leopard print coat:

Khloe captioned the two-photo gallery with the Japanese characters for “thankful.”

Khloe turned things around and went pregnant Hello Kitty glam for her next look, which consisted of a bright pink fur coat and a very tight pale pink skirt with a white top that featured a plunging neckline. This look was finished off with a pony tail and a pair of white sneakers — the latter of which came in handy when Khloe and the gals took a stroll through The Bamboo Forest in Kyoto: 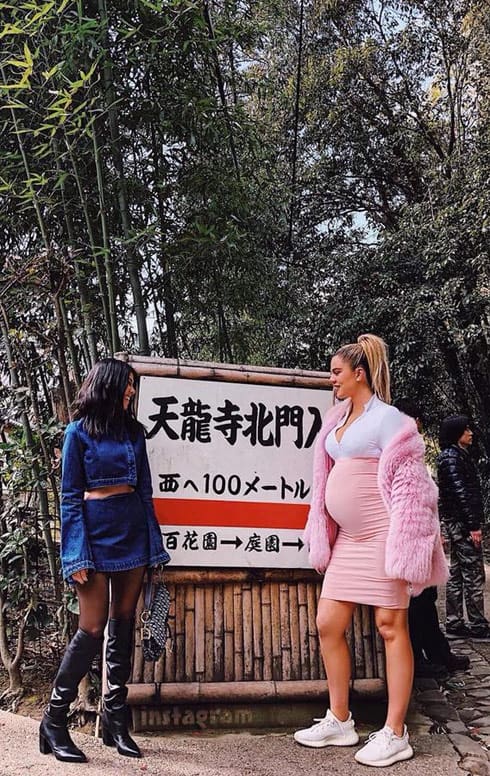 “Bamboo Forest with my ?” Khloe wrote.

Here are two photos in which you can see Khloe much better: 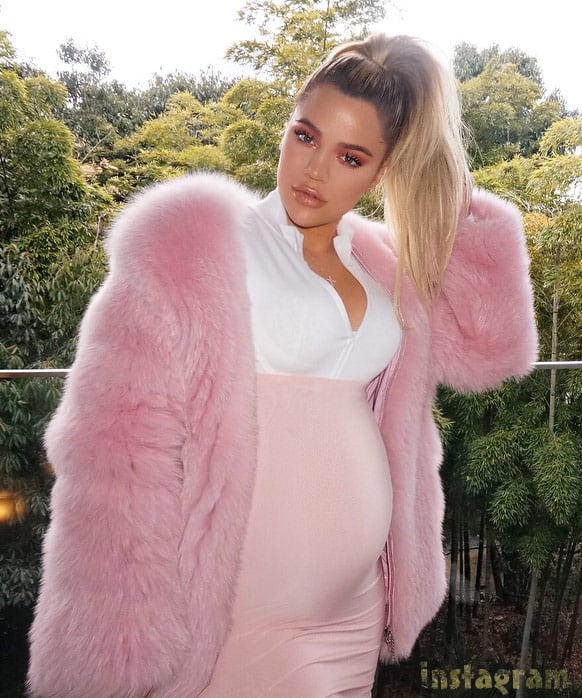 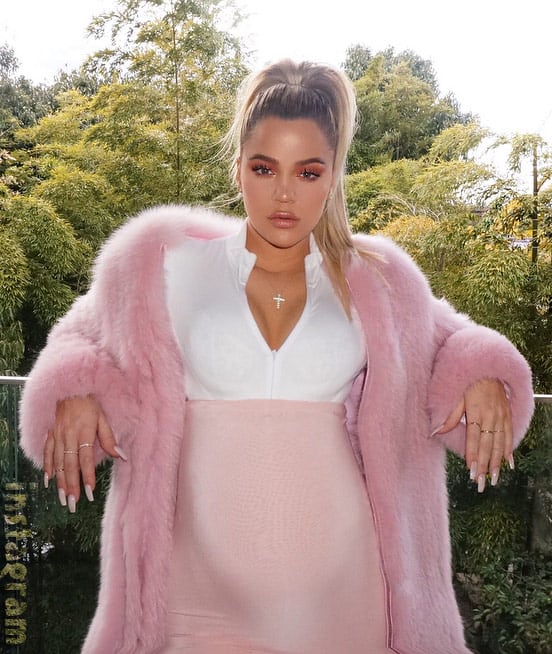 In addition to checking out the indigenous foliage, Khloe also wore her “pretty in pink” ensemble to an ice cream shop for an impromptu Instagram moment with green soft serve ice cream: 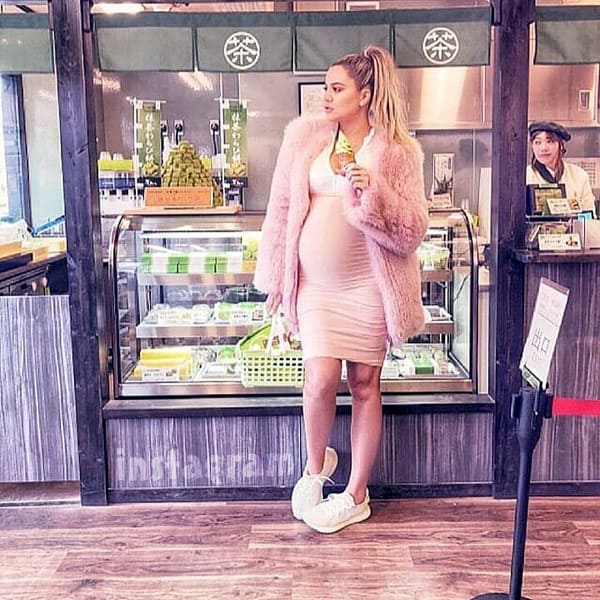 Khloe, Kim, and Kourtney are in Japan filming for Keeping Up With The Kardashians, but Khloe also had her own personal motivation for going. “She was excited about the trip,” a source told People. “It was her choice to go. She wanted a last, fun trip with her sisters before the baby arrives.” The People article also has photos from another of Khloe’s Japan ensembles consisting of a form-fitting micro-mini dress, towering thigh-high boots, over-sized hoop earrings, and a rather intimidating green overcoat — just click the link to check those out.

So what do you think of Khloe’s Japanese maternity fashion show? I think she looks glamazing as usual! Those Kardashian gals are pretty much the best in the world at Instagram flexin’.

UPDATE – Khloe just tweeted “There’s really no place like home ? bed- I missed you terribly,” so it appears as though she is back in the US.