In an emotional new preview trailer for Season 13 of Keeping Up With the Kardashians, Kim Kardashian finally reacts publicly to the terrifying moments in Paris when she was held at gunpoint in her hotel room and robbed of her jewelry.

“They’re gonna shoot me in the back,” Kim recalls amidst tears to her sisters about what she was thinking in the moment. “There’s no way out,” she adds. 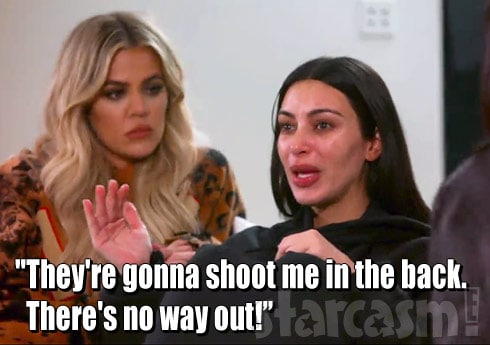 In addition to the robbery, the trailer teases the moment Kim finds out about Kanye West’s health crisis too as it shows her on the phone crying and saying “Don’t scare me, please! What’s going on?” Then an image of her and Kanye together is shown and we hear Kim saying: “I think he really needs me and I have to get home.”

In addition to the dramatic events in Kim’s life in 2016, the preview trailer also teases a lot of good times — including lots of laughter and even Rob Kardashian!

Keeping Up With the Kardashians returns to E! in March.

Kim Kardashian reveals she changes her diet every 10 days