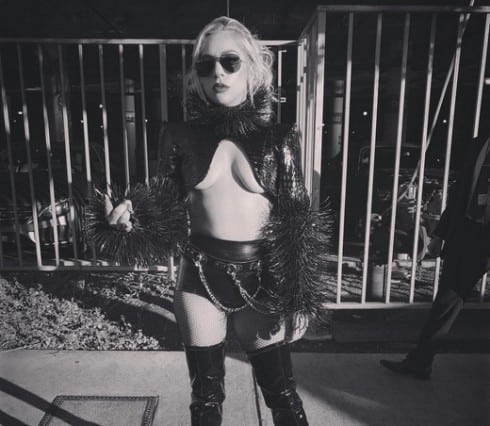 Lady Gaga was so excited to perform with Metallica at the 2017 Grammys that she went ahead and got herself a huge back tattoo to commemorate the event before it even happened. And, much like the lyrics to the song the pair were scheduled to play, her own photo of the tattoo went viral in a big hurry during the show.

The pair are scheduled to perform “Moth Into Flame,” the second single from Metallica’s newest album, Hardwired…To Self-Destruct. Both parties have been talking each other up in the days leading to the event. The song’s lyrics were inspired in part by Amy Winehouse’s descent into addiction, feature lines like “Infamy / All for publicity / Destruction going viral” and “Bulletproof / Aah, kill the proof / You’re falling but you think you’re flying high / High again” touch on all aspects of superstardom, but may well resonate all the more with Lady Gaga, who’s managed to navigate a life at the very forefront of popular awareness for nearly a decade.

And Gaga in particular has sounded excited about playing with Metallica, going out of her way to praise the band. She recently told Zane Lowe that, right now, Metallica “play better than they ever have in their whole lives.” She then further repped her Metallica fandom by saying that she’d “seen them a couple of times live” before taking in a recent performance and coming away feeling awed.

So it was in that spirit that the Lady Gaga Metallica tattoo was born: a huge moth, with a classic Metallica Pushead-style skull, all the way across her back, and a clear Metallica inspiration in her caption:

Plus, if her Instagram page is any indication, Gaga was clearly amped to be playing with Metallica at tonight’s show. She shared a post-rehearsal photo with the band yesterday…

Gonna listen to Metallica all day and party with my friends and then play with them at the Grammy's. ?#MetalliGa ?: Kevin Winter

…and Metallica returned the favor after the five of them walked the red carpet together:

On the #GRAMMYs Red Carpet with @ladygaga!

UPDATE – Here’s the actual performance itself, microphone issues and all:

VIDEOS PHOTOS JWoww is getting an epic Disney sleeve tattoo