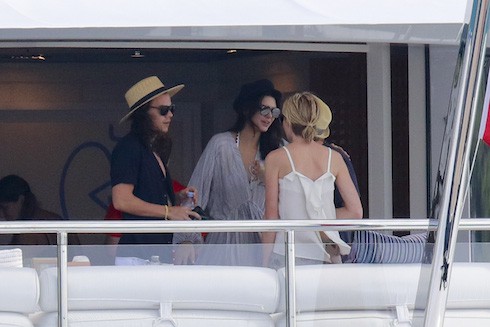 Are Kendall Jenner and Harry Styles dating? The answer appears to be yes–and they’re loving every minute of it. The hot young couple, who first met when a mutual friend introduced them, gallivanted off to St. Barts for a little Christmas season R&R last week, and have been spotted celebrating the New Year’s holiday, as well as each other’s company.

News of a Kendall Jenner and Harry Styles romance first broke over the extended Christmas break, when the 20-year-old model was spotted on vacation with the 21-year-old One Direction star. The most recent Kendall Jenner and Harry Styles sighting–depicted once above, and again below–came when the couple stepped out on board the C2 mega yacht currently chartered by Ellen DeGeneres and wife Portia Di Rossi, of Arrested Development fame. The quartet enjoyed a light lunch before Kendall donned a white bikini with black trim and enjoyed a quick Caribbean swim. 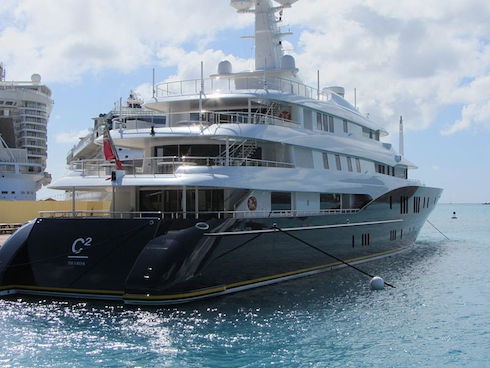 The C2 Mega Yacht, on board which Kendall Jenner and Harry Styles enjoyed a lavish lunch with Ellen DeGeneres. Not headed for Portugal

Cautious observers have noted that the couple were first introduced all the way back in 2013, but one has always seemed to be dating someone else whenever the other became single–their romantic entanglements have never gotten past the stage of brief flirtations and the occasional tabloid kiss. And noted UK tabloid the Daily Mirror recently went so far as to wonder whether the relationship was nothing more than a quick Christmas fling.

At the same time, though, Kris Jenner is reportedly “over the moon” about Kendall Jenner and Harry Styles being “in [each other’s] arms,” and couldn’t be happier about the couple ringing in 2016 together.

(By the by: In case you were wondering, the C2 is a verified “super yacht,” and checks in at an impressive 257.3 feet long. It was built in 2008, and is owned by American businessman Ron Perelman, who has been known to rent the vessel to celebrities and fellow billionaires out for a classy good time.) 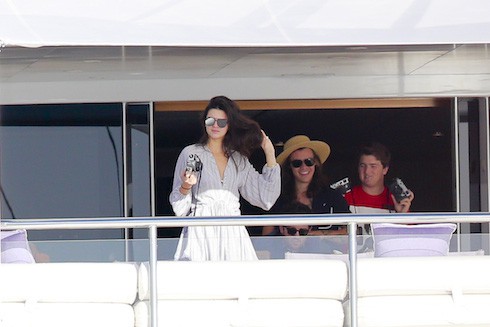 One person who’s apparently less than thrilled about the prospect of Kendall Jenner and Harry Styles making it a serious relationship is Harry’s former flame Taylor Swift, who’s said to be “completely shocked” about the pairing.

According to a known insider with close, personal information about the two, Swift “can’t believe Kendall would actually date Harry, especially after their last conversation when she said she would never get involved with him again.”

Kendall Jenner and Harry Styles last shared a passionate (and public) kiss in 2014, while on a ski trip together. They’re currently in St. Barts with Kendall’s mom and potential stepfather Kris Jenner and Corey Gamble, along with a cadre of other family friends.