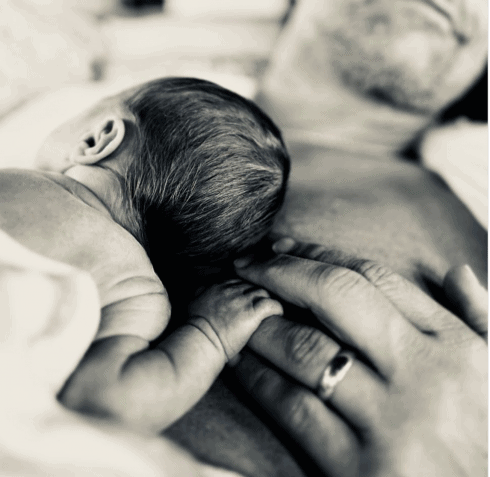 Stamos shared his son with the world via a touching Instagram photo. The infant is seen clutching Stamos’ wedding ring finger. “From now on, the best part of me will always be my wife and my son. Welcome Billy Stamos (named after my father) #NotJustanUncleAnymore #Overjoyed.”

John married his wife Caitlin, an actress just this February. The start of their marriage and family has been a bit of a whirlwind, and John is simply ecstatic over the start of his new
family.

Almost two weeks ago John attended the premiere of his pal Bob Saget’s movie Benjamin, and couldn’t stop gushing over his impending fatherhood to ET. He told the entertainment news outlet that he’d waited his whole life for this.

“I just can’t. I’m already so emotional and so excited… I’ve been dreaming about our baby. I mean, I am really excited.”

“I don’t know what I would do if I wasn’t having a baby right now,” he continued. “Like, I’ve done everything anyone could ever… I’ve had the most beautiful blessed life on the planet, and the most honest real thing I could do I haven’t done.”

As for his wife Caitlin (32,) John could not stop showering praise. “She’s so beautiful pregnant. She’s so magical,” he said of her. “She is the most graceful person I’ve ever met in my life, and she’s handling pregnancy like a champ. Every day I say, ‘You’re doing so great, you’re doing so great.’ Just every day I’m with her I just realize, first of all, how lucky I am, but what a special human she is. She’s magical. She floats into a room. I’ve never heard her say a bad word about anybody.”

#oneweek (and they said it wouldn’t last) #happiestmanonearth #happiestplaceonearth @waltdisneyworld

PHOTOS Does Good Bones’ Mina Starsiak have a daughter?