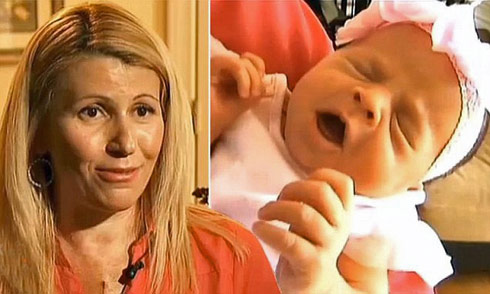 A Philadelphia area woman is being called a “miracle mom” after a terrifying event led to her giving birth while having open heart surgery.

35-year-old Edita Tracey, 8-months-pregnant at the time, was at her hair salon back on April 26 when she started experiencing back pain. At that moment she said the pain wasn’t severe and that it was just “pressing” so she called her husband Ken. But when the pain moved forward to her chest she dialed 911.

Ken was away in Chicago for work but caught the very first flight back that he could. Doctors started running tests on Tracey at the hospital in an attempt to discover if there was anything wrong with either Edita or her baby. An obstetrician ordered a CT scan for blood clotting.

The scan showed that Tracey’s aorta was ripping apart. The scans were immediately forwarded to a heart surgeon and the diagnosis was grim. Edita Tracey, an active and healthy woman with no previous symptoms, and her baby didn’t have much time.

FOX 29 reports that the mom-to-be was airlifted to another hospital where two surgical teams awaited. One was assigned with the task of delivering the baby while the other was prepping to perform open heart surgery in hopes of saving Edita’s life.

High-risk obstetrician Dr. John Horton said, “When they put a mom under full-sleep anesthesia, that medication is now running towards the baby. So, I need to get to the baby as efficiently as possible.” Heart surgeon Dr. Omar Lattouf added, “As soon as mom went to sleep, literally, literally, 30 seconds and that baby was out and screaming.”

The tear in Tracey’s aorta was a foot long. Dr. Lattouf would later say it was the most complicated case in his 30 years of surgery. As new dad Ken held his daughter for the first time his wife lay on an operating table battling for her life. “You think about the baby, this should be a joyous occasion. And now your mind goes right back, it goes right back to if she’s going to make it. The whole night was up and down,” he said.

Edita did make it and she’s expected to make a full recovery.