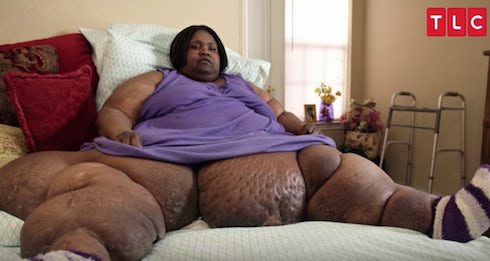 My 600 Lb Life‘s audience initially had it in for Season 6’s Liz Evans, who unfortunately slipped back into some bad eating habits after a successful surgery. By the end of her episode, though, Liz was rivaling fellow Season 6 cast members Sarah Neeley, Rena Kiser and Lee Sutton, and even David and Benji Bolton for the title of most successful weight loss. And the latest My 600 Lb Life Liz update suggests more of the same.

Liz Evans suffered from many ailments familiar to My 600 Lb Life‘s participants and viewers. The lymphedema on her legs was out of control, but she couldn’t have surgery to remove it until she could stand on her own. Complicating matters was the fact that Liz was born with one leg shorter than the other.

Liz’s trauma was likewise familiar, though no less heartwrenching for that. By the time she was thirteen, Liz weighed 250 pounds. A decade later, she weighed more than 400 pounds, and her problems with lymphedema began. But the family trouble didn’t stop — it only intensified, culminating in her father’s death shortly before filming for the My 600 Lb Life Liz episode began:

When Liz finally met Dr. Now, her weight — 721 pounds — was the highest it had ever been. Going on a 1200-calorie-a-day diet helped Liz shed 146 pounds within two months, and over 200 pounds after five. Physical therapy proved to be an even more difficult challenge, though, and Liz remained unable to stand or walk without assistance.

And, as if all that weren’t enough, Liz also found out while undergoing tests before lymphedema surgery that she was suffering from an enlarged heart. The barrage of bad news often made Liz want to give up, but she managed to keep her goal in sight.

“I have been able to start to sit up and get to the edge of the bed, which I feel is good progress because that has been more than I have been able to do in a long time,” Liz said, during her extensive physical therapy. “It’s just so hard, because physical therapy is excruciating. It’s like your legs are awakening the muscles, and coming back alive because I’ve been laid up so long…

“But I know I need to stand to get my lymphedema surgery, so I’m trying every time to do it.”

Though she regained 50 pounds after returning home and slipping back into bad habits, Liz was able to drop all the regained weight and more thanks to the combined efforts of hospital monitoring and a psychotherapist. All told, within a year Liz went from 721 pounds to 368 — meaning she lost a grand total of 353 pounds, or just a shade under half her body weight.

Liz’s social media profiles all appear to be private (or non-existent). But TLC has released at least one new My 600 Lb Life Liz Evans before-and-after photo, and it reveals a markedly different woman than the one viewers met at the start of her first episode.

The network has yet to release any information about Liz’s Where Are They Now? episode, but it’s standard practice for all later season participants to be under contract for at least one follow-up. So it seems likely that we’ll get a second episode with Liz when My 600 Lb Life Season 7 premieres in the spring of 2019.

For now, you can stream the My 600 Lb Life Liz episode here, via TLC.