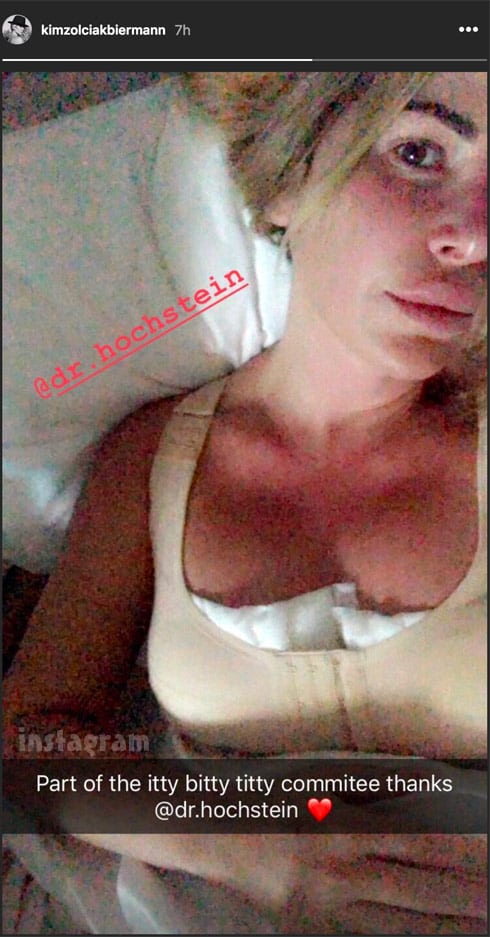 The Real Housewives of Atlanta star Kim Zolciak-Biermann is no stranger to plastic surgery procedures, and the 40-year-old mother of six was back under the knife this week to have her breasts worked on — but this time she’s scaling back.

“Part of the itty bitty titty committee,” Kim captioned a post-op photo (above) posted to her Instagram story. She added: “thanks @dr.hochstein” as a shout out to her surgeon, Dr. Leonard Hochstein — who Real Housewives fans may recognize as the husband of The Real Housewives of Miami star Lisa Hochstein.

Although Kim didn’t indicate what size implants she decided to go with, she previously indicated that she was considering a full C-cup during an episode of her House of Kim podcast back in July. “I was thinking of going from like a DD to like a C,” she said, before asking that folks head over to her Instagram poll to vote for either DD or C.

Kim revealed in the podcast that she had already spoken with Dr. Hochstein, “who did my boobs and tummy a few years ago — he did my hernia repair and my tummy tuck after that.” Kim recalled of the phone conversation: “I said, ‘You know, I feel like I should get my boobs reduced. They’re heavy, my posture’s terrible, I’m getting older.’”

Kim talked a bit about her current breasts — both the positive and the negative aspects. “I obviously have implants. I have the largest implants they actually make, but it doesn’t look that big on my body because of just the way I’m built,” she said. “I had a lift and I have like the nicest boobs ever. I did breastfeed all of my kids, so ladies, let’s be honest, they were stretched out, loss of volume, pancake nipples,” she revealed. “So [Dr. Hochstein] gave me back my 18-year-old chest, which was amazing. He’s the best for that you guys.”

“I have to have all my clothes altered,” Kim continued. “I have to buy a size 6 in everything when I could wear a size 2 in tops because of my boobs, and then have everything altered. So it’d be nice to just be able to wear something.”

I will admit that I am super excited to see Kim’s new, less top-heavy look! Even though I think her lips should have been higher on the list of potential downsized body parts.

As we wait for Kim to show off her new bubbies, let’s pay homage to her well-documented Instagram mammaries — which really were some of the best looking DD breast implants on reality TV: 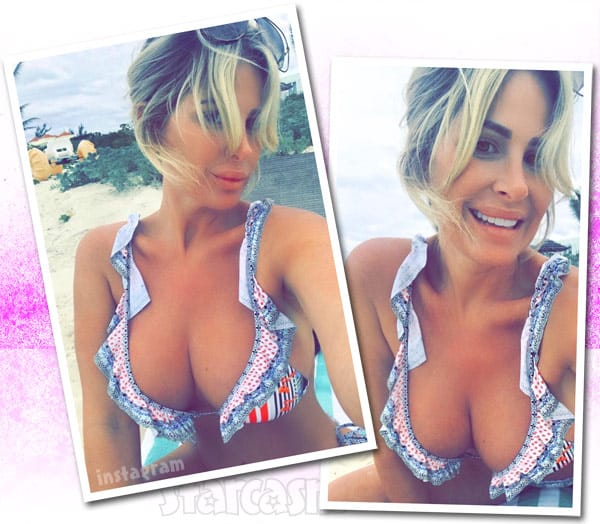