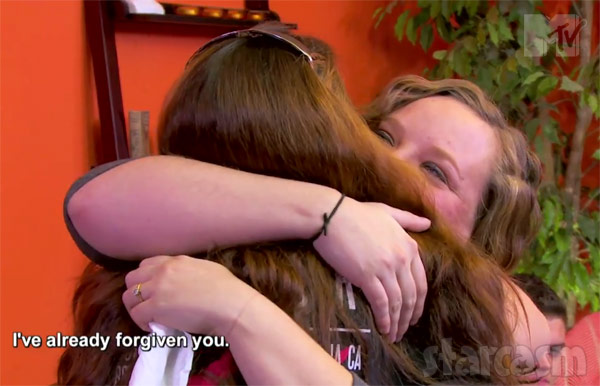 It’s been almost two-and-a-half years since MTV aired a new episode of Teen Mom, so it would make since that they would want to refresh fans’ (and non-fans’) memories prior to the return of the original girls in Teen Mom OG on March 23. That refresher will come in the form of four hour-long “Getting To Know…” specials – one each for Catelynn Lowell, Amber Portwood, Maci Bookout, and Farrah Abraham premiering this Saturday.

MTV hasn’t revealed much information about the specials, but they did release a preview video for “Getting To Know Catelynn” in which she, Tyler, Catelynn’s mom April, Tyler’s mom, and (I believe) Tyler’s sister watch scenes from Catelynn’s emotional 16 and Pregnant episode. This, along with the brief descriptions of each episode included below, would seem to indicate that the specials will be the moms and their families watching clips from their journeys (as featured on 16 and Pregnant and Teen Mom) and offering commentary. Here’s the clip:

Here is the schedule for the “Getting To Know” Teen Mom OG specials airing Saturday, February 21. with a brief description for each. It should be noted that all four specials will air twice. Also, the TV Guide, DirecTV and MTV.com air times conflict with the Facebook post above by one hour for the second airing of “Getting To Know Catelynn.”

UPDATE – Click the links for preview clips from the other “Getting To Know…” specials!

12/11AMc Getting To Know Catelynn – Catelynn and Tyler relive their decision to give their baby up for adoption, and everything that followed.

1/12c Getting To Know Amber – Amber and Gary reflect on the years documented by MTV, and discuss her drug addiction, going to jail and the custody of Leah.

2/1c Getting To Know Maci – Maci and her friends examine the past six years and discuss the difficulties of growing up in front of an audience.

3/2c Getting To Know Farrah – Farrah’s family and friends share their feelings about her involvement in the adult entertainment industry, and the hardships following Sophia’s father’s death.

On a side note, does anyone know the reason MTV handles these specials the way they do? (They’ve done the same thing with most all of their 16 and Pregnant “Where Are They Now?” specials as well as their string of “Being..” Teen Mom specials.) They premiere them in the morning or around noon on the weekend before then re-airing them that night, and the airings they promote on their site and social media are the later ones. What’s up with that? It’s as though they want the premiere (the technical premiere) to have low ratings. Is that a financial thing based on contracts with the stars of the shows, or perhaps some sort of ploy to mess with the numbers for advertising reasons? I haven’t really noticed this phenomenon much with other networks and I’m just curious.