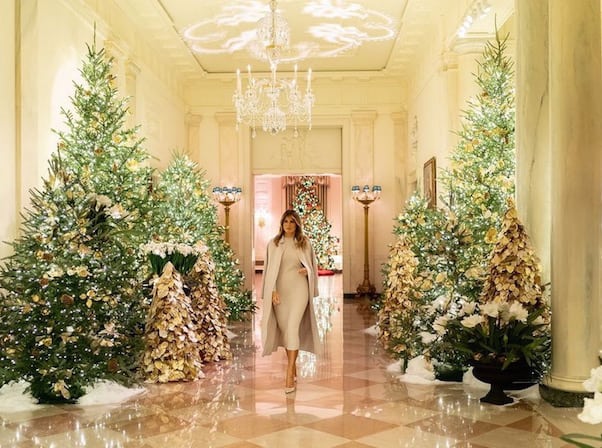 Melania Trump is already on record saying she hates decorating for Christmas and thinks it’s a huge pain in the ass. (She never actually said “f*ck Christmas.” But what Melania *did* say — “Who gives a f*ck about Christmas stuff and decoration?” — is the very definition of “close enough.”)

At the same time, sources close to Melania are also saying, very much off-the-record, that she considers her marriage to Donald Trump “over.” The anonymous gossip seemingly confirms what we’ve been hearing for years: that the first couple hates each other and Melania can’t wait to be shed of her philandering husband.

So we can’t help but wonder whether the Melania Trump Christmas 2020 theme will have anything to do with the couple’s apparently impending split.

The 2019 theme (“The Spirit of America”) was safely banal. It was the decorations that generated attention, though they weren’t as much of a literal horror show as the 2017 and 2018 versions.

But if the 2020 theme is something even simpler and more direct — “Individualism,” say, or “Newfound Independence” — then Melania might as well have festooned the walls with copies of her filled-out divorce papers.

We should also point out that the growing chaos of the current president’s final days in the White House are only part of the reason for the renewed divorce speculation.

There’s also the matter of the viral White House Christmas Tour page to consider. Over the weekend, an innocuous site that appeared to be affiliated with the White House went viral for its quiet admission of electoral defeat.

The current president’s cronies sounded the alarm on television, claiming the election had been rigged against and stolen from them. Meanwhile, at Whitehouse.gov1.info, the page for Christmas tour information for the following update:

Now, we do need to point out that this page is actually *not* the official White House Christmas page.

But screengrabs like the one above went viral quickly enough that plenty of people were fooled into thinking that Melania Trump was ready to admit defeat, no matter what her husband said.

In fact, so many people were fooled by the page that a disclaimer had to be added.

“Note to Readers,” the new text reads. “Joe Biden won the election which makes this the final holiday season for the Trump White House. This is not the official White House website as noted in the footer below.”

We can’t say for sure how Melania’s last couple of months in the White House will play out. But no matter what, she and her still-current husband can recall fondly the good times they did share.