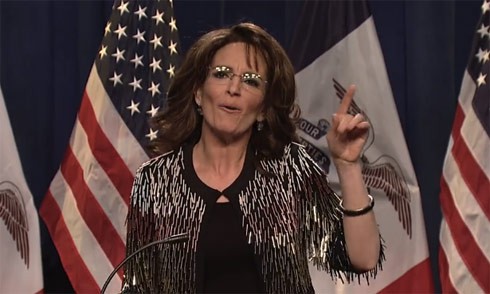 There’s at least one person who didn’t care for Tina Fey’s return to SNL, as the actress took another turn at her already famous Sarah Palin impersonating.

Bristol Palin sounded off on the performance in a blog post via Patheos.

I’m sure many of you saw Tina Fey, who sounds nothing like my mom, do a skit based on my Mom’s endorsement of Donald Trump. I don’t know about you, but hearing her fake accent is like nails on a chalkboard for me!  Saturday Night Live and Fey have been clinging to this impersonation a little too long. It’s getting pathetic. Its been 7 years! Are they desperate for content?  Or just desperate for viewers?

Bristol then argued that her mom outshines Fey in the looks department even though the former Governor of Alaska has “three more kids and seven more years on Tina!”

She then poked fun at Fey and SNL for being unable to score a sold out spangly top that Sarah wore during her recent endorsement of Donald Trump for president.