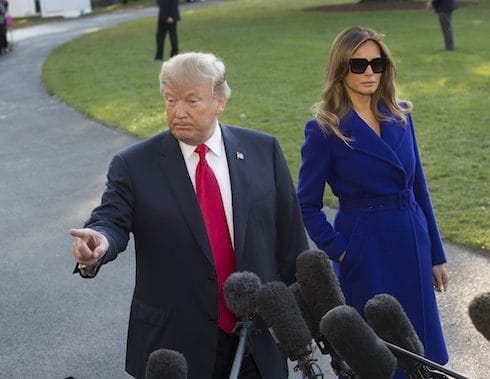 Melania and Donald Trump have never seemed more distant from one another or less concerned about how that distance comes across via the cameras recording their every move. Now, thanks to the ongoing Stormy Daniels fallout and Melania’s near-constant swatting of Donald’s hands — not to mention the 25+ detailed sexual misconduct allegations lodged against the President — the two have spawned an entire subgenre of journalism dedicated to chronicling what looks increasingly like their inevitable divorce.

Of course, Melania and Donald and the affection they may or may not have for each other have been the subject of gossip ever since Inauguration Day…

Seems the only #Wall @realDonaldTrump's built is the one between him and @FLOTUS #Melania #trump pic.twitter.com/XiNd2jiLUF

…or, really, whenever they walk outside of the White House together. Earlier today, for example while approaching Marine One for a trip to Ohio, Melania spun away from Donald’s grip and crossed in front of his path like a kidnapped heiress evading her captors on a promenade. It was…awkward.

After news of the payment broke, Melania basically canceled every public appearance and instead went to Mar-A-Lago to stew. She only reemerged to attend the State of the Union last week, but didn’t travel to the speech with her husband. (Melania also, per the New York Times visited the Holocaust Museum instead of traveling to Davos with the president.)

From there, the piggybacking began: THG followed on the heels of Splinter’s piece with an article comparing Melania and Donald’s marriage to a Faustian bargain, while People made hay of Donald ditching Melania to ogle cheerleaders at a Super Bowl party.

Even Washingtonian got in on the game, speculating openly about how a First Divorce would play out. (In fairness, we should point out that their article came out before Splinter’s, but after the Times piece on Melania’s embarrassment.)

Among the other evidence pointing toward a supposed Melania and Donald split: for one thing, they didn’t celebrate their 13th wedding anniversary on January 22nd — at least not publicly. And the anniversary itself came two days after Melania raised just about every observer’s eyebrows with the photo she used to celebrate the one-year anniversary of Donald’s inauguration on her official Instagram account:

This has been a year filled with many wonderful moments. I’ve enjoyed the people I’ve been lucky enough to meet throughout our great country & the world!??

But if photographic speculation is your jam, you probably already know that Melania’s Instagram account is chock full of curious pics. Consider this upload, in which Melania and Donald manage to mostly be in the same room together on Christmas Eve:

@POTUS and I had fun helping children track #Santa tonight. Wishing everyone a wonderful #ChristmasEve ?

Or this one, which captured them marveling over the brilliance of nature during the total eclipse:

Exciting to watch the total eclipse with @potus today! #Eclipse2017 ?

Or this other one where they stood next to each other and enjoyed a romantic setting like people who seem totally at ease in each other’s presence:

Or this now-classic image of Melania and Donald using protection on Inauguration Day:

I am deeply honored to serve this wonderful country as First Lady!

And honestly, it’s almost moot at this point whether Melania and Donald actually do become the first First Couple to divorce while in office. Melania Trump is a woman who was believed to be so unhappy in her marriage and position as First Lady that a batsh!t crazy conspiracy theory claiming she’d been replaced by a body double so she wouldn’t have to do it anymore got mainstream media coverage for several days. She had to deny a report that she cried tears of sadness on Election Night. She and her husband allegedly sleep in separate bedrooms. All Melania really wants is wealth and seclusion. She would switch with Hillary Clinton in a heartbeat.