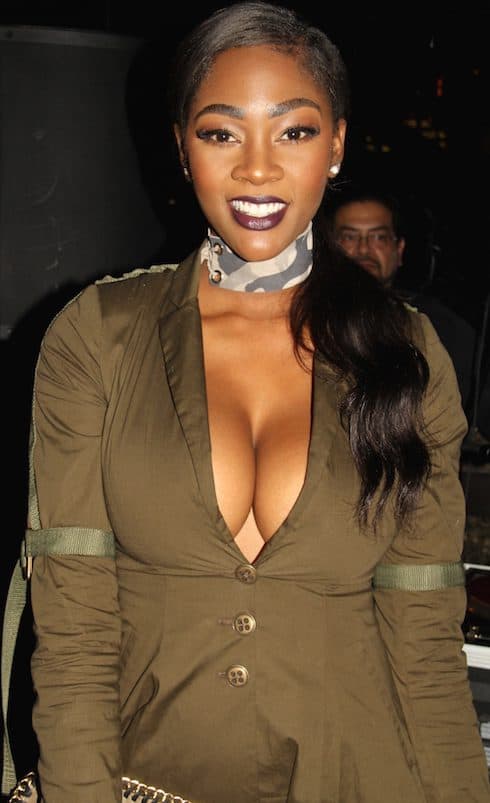 Amber Diamond is no stranger to Love & Hip Hop Hollywood fans or to reality TV followers in general. The LHHH Season 5 newbie has been on a bevy of shows over the past few years, often accompanied by her mother and manager, Shun Love. But by parlaying a chance Season 4 appearance into a current season cast membership, the model and actress may have punched her winning ticket.

Though she carries herself with an obvious poise, Amber Diamond’s age appears to be something of a surprise for fans of the show. Again, Amber — who was born on March 16th, 1994 — has been in front of cameras, trying to carve out place in the spotlight for her entire adult life, and a good portion of her teenage years. Her 24th birthday Instagram post showed Amber’s slightly sillier side:

Amber made her LHHH debut almost exactly one year ago, when she popped up out of nowhere to tell Teairra Mari that Cisco had been playing both of them for fools. Each woman thought she’d been dating Cisco exclusively; when they found out he’d been going behind both their backs, the women teamed up against him.

Now that she’s joined up full-time for Season 5, Amber says she’s ready to focus all her attention on music. It’s been a difficult transition, though, as Amber has had a foot in the modeling game since the age of 15. In fact, according to Amber’s official Model Mayhem profile, the native of Chelsea AL “moved to Los Angeles” as a teenager solely “to follow [her] dreams and to be successful in life.”

That page also lists Amber Diamond’s measurements: her height is 5′ 9″; her weight is 125 pounds; her bust is 34″; and her hips are 25″. She hasn’t updated the profile in a few years, but it doesn’t look like Amber’s has had any trouble getting modeling gigs since then, as the frequent professional Amber Diamond bikini pics on her Instagram page can attest:

Before Love & Hip Hop, Amber tried to make a name for herself with a string of short-lived reality TV appearances. Her modeling dreams were at the forefront of the first of these: TLC’s Raising Fame, a backdoor pilot from 2013 featuring three mothers who’d moved out to LA to try and turn their daughters into stars. Shun, Amber’s mom, summed up her approach as “From the hood to Hollywood.”

In one scene, Shun also appeared to take Amber to task for not being more aggressive with her natural gifts. “With your height? You’re a freakin’ size zero and D boobs,” Shun said. “Victoria’s Secret all day long.”

Two years later, Amber and Shun were two of the mother-daughter pairs featured on Oxygen’s Fix My Mom, featuring mother-daughter relationships fractured and on the brink of collapse:

It looks like things have worked out for the two of them since then, as they’re both major players among LHHH’s crop of new cast members.

You can keep up with Amber on Instagram here, on Twitter here, and on Facebook here. And you can check her out every Monday night when new Love & Hip Hop Hollywood episodes air on VH1.