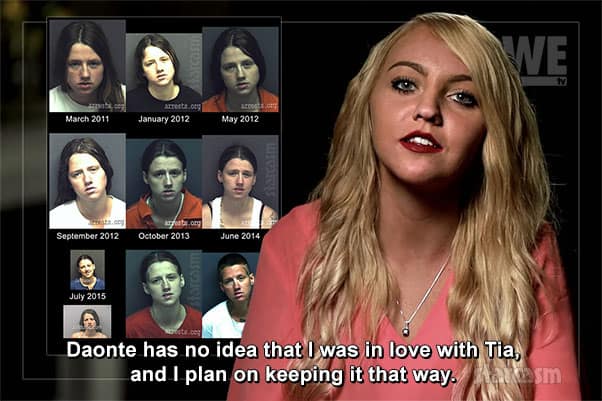 Love After Lockup star Nicolle revealed on tonight’s episode that she had been keeping a secret from her not really fiance Daonte. That secret is a former girlfriend named Tia that Nicolle still has the hots for!

“In prison I started dating this girl Tia,” Nicolle reveals on camera. “Tia got out about four months before me, and she was very special to me…I was with Tia for, like, a year or two, and then I feel like she cheated on me. She says she didn’t, but my gut says she did. So, I broke up with her.”

Despite suspecting Tia of cheating on her, Nicolle decides to give Tia a call anyways. “I don’t know, I’ve got a soft spot for her. I don’t know what the f*** it is, I really don’t.”

And, of course, Daonte is clueless. “Daonte has no idea that I was in love with Tia,” Nicolle tells the camera. “And I plan on keeping it that way.”

Is Nicolle able to rekindle her relationship with Tia? If so, did it work out? Be sure to check out our HUGE Daonte and Nicolle spoiler post for the answers!

If you’re curious to know a little more about Tia, we did some research and the results were quite astounding! Tia is 30 years old and originally from central Virginia. That isn’t very astounding, but the number of times Tia has been charged with crimes certainly is! I’ve compiled a timeline of the charges against Tia in the state of Virginia since 2011. Please note that being charged does not mean Tia was convicted of that charge(s).

As you can tell from the timeline, Tia’s most recent charge was for selling a controlled substance. She pleaded guilty to the charge and was sentenced to seven years in prison. I am assuming that was the charge she was serving time for when she met Nicolle in prison, but I cannot confirm that.

Here’s the full timeline arranged by the date of the alleged offenses with an assortment of Tia’s mug shot photos: 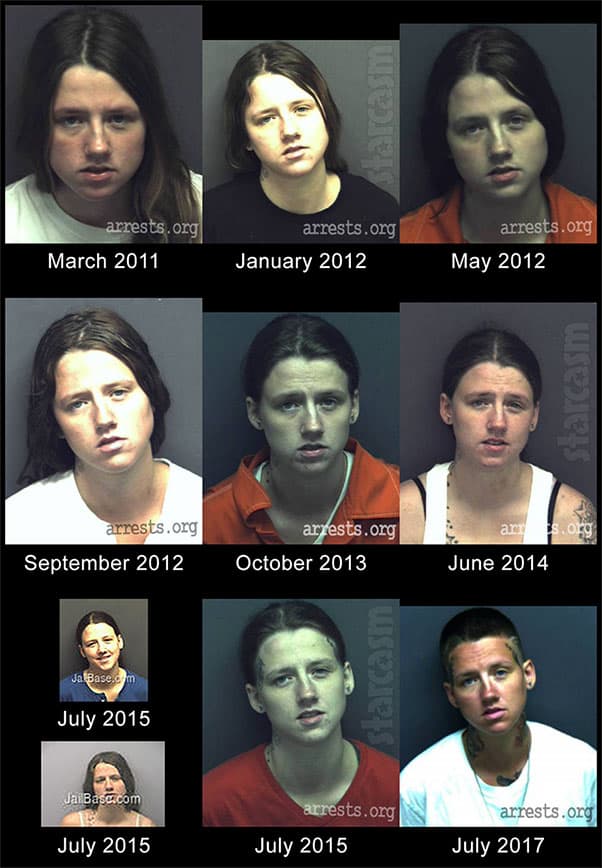 March 4, 2012 – Destruction of property with intent

March 5, 2012 – Destruction of property with intent

Will Tia be able to stay out of trouble and out of jail for good? Time will tell! The same goes for Nicolle. Be sure to watch how her and Daonte’s dramatic story unfolds with new episodes of Love After Lockup airing Friday nights at 9/8c on WE tv!

If you’re too impatient to see how all the new Love After Lockup couples’ stories unfold, we’ve got TONS of spoilers for you. Here are the headlines and links:

Surprise! #LoveAfterLockup's @italianqueen757 & Nicolle made adult videos together in 2016 as Kaci Kash & Molly Jane! 😲 Did Lacey get Nicolle on the show? Was she just scamming Daonte? Does Daonte even know?! So many questions! https://t.co/VojYInLmsr pic.twitter.com/hxMTUQivqr