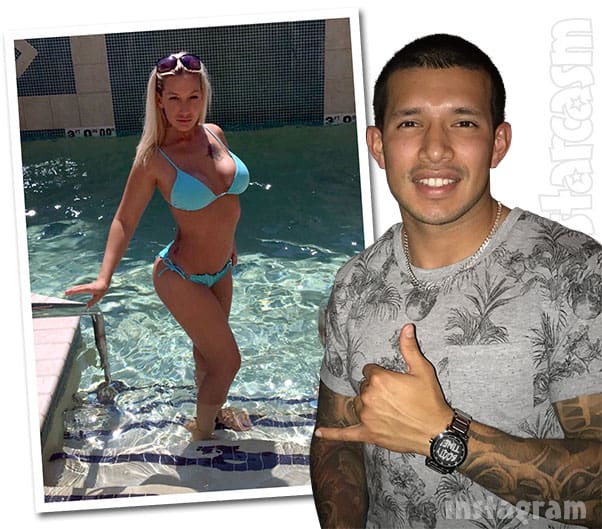 The list of women not claiming that Teen Mom 2 dad Javi Marroquin either hooked up with them or tried to hook up with them over the past few years continues to shrink. The latest #JaviJookup to come forward is Love After Lockup and Life After Lockup star Lacey Whitlow, who claims that Javi used to watch her adult live streams and wanted to meet up with her.

As our readers are well aware, Lacey used to do extensive cam modeling under the name Kaci Kash. It was apparently during this time, which was before her appearance on Love After Lockup, that Javi attempted to slide into more than just Lacey’s DMs.

Lacey made the reveal in response to a Hollywood Life article about Javi’s recent emotional Instagram Live session. In the stream, Javi teared up and talked about dusting off his Bible and returning to God after his ex Kail Lowry revealed on Teen Mom 2 that he was trying to hook up with her in a gas station parking lot during a custody exchange late last year.

“Lmao he’s always been a player!” Lacey replied to Hollywood Life’s tweet about the article. “He use to watch me LIVE on webcam and would snap chat video himself all while in a relationship!! I’m not surprised…. he’s just sorry his baby momma put him out on National TV.” Lacey included a few laughing emoji before adding: “He played himself.”

Another Twitter user wanted to clarify that Javi was really sending videos of his lil Coltee. “He snapped you videos of his junk?” she asked. “What a creep!”

“Girl I’m telling you this was b4 I was on tv,” Lacey explained. “I was just a chaturbate cam model 😂😅 Lmao 😆 I’m sure I’m not the only one ☝️ but he was trying to get me to meet him, such a creep.”

Another Twitter user shared a Teen Mom Shade Room video addressing a Facebook group comprised of at least seven women who claim that they were (are?) hooking up with Javi at his Crossfit Killshot gym north of [Ben] Dover, Delaware. “WOW!!!!! I heard other women have been coming out saying he hooked up with him at his gym,” the tweet accompanying the video reads.

“I don’t see how anyone could be surprised,” Lacey responded.

Thankfully, Lacey has not blessed the internet with any sort of receipts in the form of Javi junk clips.

Lmao he’s always been a player ! He use to watch me LIVE on webcam and would snap chat video himself all while in a relationship !! I’m not surprised…. he’s just sorry his baby momma put him out on National TV 🤣🤣🤣 he played himself #TeenMom2 https://t.co/RSuF7m5Jsg

As mentioned above, Javi took to Instagram for a tearful live session expressing remorse over hosting his own Bangapalooza Festival since being with Lauren. He talked about turning to God and the Bible as he revealed he was going to have an online prayer group the following morning. I assume any and all attractive women between the ages of 18 and 30 are welcome to join.

Here is most of his stream courtesy of @teenmom.tea on Instagram, followed by a full transcript of the clips (plus a little bit from other clips I could find online):

Javi gets emotional during live while talking about his faith and needing to fix himself! Looks like Lauren’s absence is starting to hit him. #TeenMom2

I don’t know if I have any, like, religious people on here, but what I wanted to do — I thought might be a good idea — is kind of have a prayer group first thing in the morning. So, the reason why I say a prayer group is I went back to church and, you know, I was looking for a sign. I was looking for — I’m trying to get my words together — I was looking for something, you know. [I] asked God, “Hey, give me some type of sign that I’m in the right direction to fix myself and figure out all these issues that I got.”

So, anyways, a friend of mine, he does this prayer group and we went over this scripture passage and as we were talking…

I’ve been reading my Bible as soon as I wake up. Um, but you know it’s kind of lonely by myself, so I was hoping, you know, if anybody’s going through some financial troubles, some relationship troubles, family troubles, you know, and you just need someone to pray with — I kind of want to open that door. So I’m going to have a Zoom at 6:30 in the morning if you’re interested, if you’re going through anything and you just want to pray with someone — if you need someone to pray with.

I’m still trying to understand the Bible myself, and understand passages, so it’s going to be a learning curve. It’s going to be my first one. But anyways, if you’re interested, shoot me a message and I will get you that Zoom ID and password.

#TeenMom2 @KailLowry says she "ignored red flags" & was "desperate" when she married @Javimarroquin9. Javi takes the high road: "I’m enjoying my life as privately as I can. I don’t need to be looking for validation from social media." https://t.co/FAvVEboDve
🚌
🚌
🚌
⬇️
🙇‍♂️

It seems the prayer group concept went over well with Javi’s followers. “To receive faith you must give faith,” Javi began a text graphic post on his Instagram after his live session. “At a lost [sic] for words, so many DMs wanting to join my prayer group tomorrow morning. I promise I’m going to answer all of you with the code.”

I’m not sure how the prayer group session went this morning.

Meanwhile, Javi’s most recent cheating victim Lauren is reportedly back in her home state of Maine with their 19-month-old son Eli. She appears to have scrubbed Javi from her Instagram feed, leaving only photos of herself and Eli, as well as a slew of posts promoting her MLMpire.

UPDATE – Javi has since replied to Lacey’s allegations with a full denial. “I don’t even know who that is,” Javi wrote on Instagram. “Or even what show that is. Look I f***ed up 100% and I’ll take blame for that but these random people trying to get clout ain’t cool. Don’t kick someone when they’re down. Don’t hurt more people for no reason. Not cool.”

And I just had to look up this person’s ig to know what she even looks like I wouldn’t have even entertained this in 2015 or whenever she’s claiming.

I don’t need clout , if I needed clout I would of said something BEFORE I was on TV. You’d be surprised how many “celebs” hit up cam girls… not putting any names out most don’t get caught n actually pay great, but u know when u beg for free shit n your already being outted..🥴