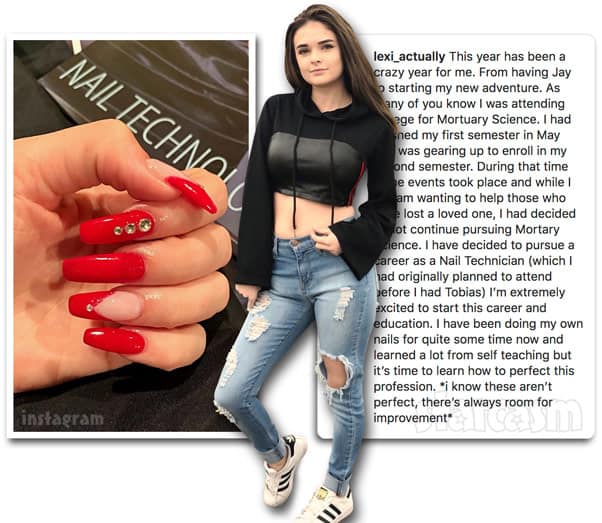 Former Teen Mom: Young and Pregnant star Lexi Tatman’s had quite the eventful life since departing the show after one season! The 19-year-old surprised everyone in August when she revealed she had given birth to a second child, a boy named Jay, after somehow managing to keep her pregnancy a complete secret. This week, Lexi shared another major change in her life as she announced on Instagram that she is no longer planning to be a funeral director, but is instead studying to be a mail technician.

“This year has been a crazy year for me,” Lexi began her post from Tuesday. “From having Jay to starting my new adventure. As many of you know I was attending college for Mortuary Science. I had finished my first semester in May and was gearing up to enroll in my second semester. During that time some events took place and while I still am wanting to help those who have lost a loved one, I had decided to not continue pursuing Mortuary Science.”

Several commenters asked Lexi about the “events” that took place that caused her to stop pursuing her mortuary science studies. “I’ll share why here soon,” Lexi replied. “It was personal [and] I just don’t think my heart can take it,” she added.

As we previously reported, one of the people who inspired Lexi to want to pursue a mortuary career recently took advantage of Lexi and her family — and numerous others — with her organ and tissue harvesting business that also included a crematorium that allegedly sent families fake bags of cremains.

#TeenMom #YoungAndPregnant star @lexi_tatman reveals that her family was victimized by organ and tissue harvesting crematorium and funeral home currently under investigation by the FBI! https://t.co/UCdyEzvGQf

Here is an excerpt of what Lexi had to say about Megan Hess, the former owner of Sunset Mesa Funeral Directors:

This local funeral director has handled 3 of my family members. She hosted my baby shower as well. She also had a influence on my future as a funeral director. A few months ago there was a story of her by [Reuters]. They claimed she sold “donated” body parts illegally. We were suspicious that she had sold my papa because we agreed to donate life. This story was of course denied by my town. There was a FBI report and investigation into her funeral home and what they found was horrific. What was such a crazy idea turned out to be reality.

Lexi shared that information a little more than a year ago, at which point the FBI investigation into Megan Hess was in full swing. The timing doesn’t seem to line up as far as Lexi finishing up a semester in May, and Lexi seemed determined to stick with her course of study. “She is never going to ruin my dreams of being a funeral director,” Lexi said at the time. “She’s pushing me to be a better one than her.”

Of course, when Lexi wrapped up the semester in May, she would have been six months pregnant with Jay. So perhaps that had something to do with her decision? Or maybe it was because her former mentor got into even more trouble.

Megan Hess has been named in at least three lawsuits in regards to how her business handled human remains, and she lost her insurance license just a few months ago due to another alleged money-making scheme. From The Denver Post:

Megan Hess, who operated the defunct Sunset Mesa Funeral Directors, had her insurance license revoked in August after state regulators said she sold contracts for future funeral services but instead pocketed the money — never giving the policy or contract to the insurance company, the state said in its final agency order.

The license revocation was ordered Aug. 27 by the Colorado Division of Insurance, which falls under the state Department of Regulatory Affairs. Hess also was hit with nearly $38,000 in fines and $2,385 in restitution for violating Colorado insurance laws. The revocation first was reported by the Colorado Sun.

UPDATE – After publishing this post, Lexi reached out to us to clarify that it was not the investigations into Megan Hess that caused her to change her mind about being a funeral director. As stated in her Instagram comments, she will reveal the actual reason when she is ready.

“I have decided to pursue a career as a Nail Technician (which I had originally planned to attend before I had Tobias),” Lexi continued in her Instagram announcement. “I’m extremely excited to start this career and education. I have been doing my own nails for quite some time now and learned a lot from self teaching but it’s time to learn how to perfect this profession.”

Lexi included a link to a new Instagram account for her nail tech under the id @getnailedbylexi. Here are the first two posts on the account showing off Lexi’s nail skills:

Don’t skip nail oil kids. Are you wondering why my nails are slightly blue? I had just gotten my hair colored with a slight blue tinge and every time I ran my fingers through a little bit of blue would come out lol #alwaysroomforimprovement #nailsofinstagram #intraining #whitenails #sparklynails

“You’ll be a great nail technician, but I do have to say my mind went STRAIGHT to the gutter when I read get nailed by lexi,” one commenter pointed out, adding a laughing emoji. “Couldn’t help myself. ?‍♀️ I’m 10 apparently ?‍♀️.”

Lexi replied by pointing out that the name wasn’t actually her idea, and it’s not written in stone. “Kyler came up with it ? If it’s anything, my mind goes straight there all the time ? I’m open to new suggestions.”

LEXI: @ashleysiren ?❤️❤️❤️ girl once I get really good I’d love to do yours if you’d like ?

ASHLEY: @lexi_actually you know I’m down!

ASHLEY: @lexi_actually if I was close enough I’d let you practice on me. This is very nice tho Lexi! Take it from the nail guru herself ? (I just mastered painting my left hand)

In addition to the compliments, Lexi also received some comments questioning her career choice. Here are a few interactions from the comments:

LEXI: @commenter_1 thanks for the lesson life coach ? I’ll be proud no matter what I do. Besides I won’t be drowning in student debt ?

COMMENTER 2: Girl….. nail technician is a good side gig but your giving up a career with stability that you will make three times as much to be a nail tech? From one ex-nail tech to you.. I’m speaking from experience and advise you stay in school for mortuary science.

LEXI: @commenter_2 thank you. I actually really don’t want to be in that profession anymore due to some things that happened. If it doesn’t work out then so be it ?

Congratulations to #TeenMom #YoungAndPregnant's @lexi_tatman as she and @CyberTheWarrior welcome their second child, a baby boy named Jay, after somehow managing to keep her pregnancy a secret! ???https://t.co/8pPscIxFXG

COMMENTER 3: @lexi_actually I admire you courage, like: if doesnt work its because it shouldn’t be. You don’t go down because of passive aggressive advice and that’s amazing, from one *thanks to a lot effort* sucessed [sic] person to another, you understand everything about life when you decided to do what you want even with the ups and downs. You go girl! ?

COMMENTER 2: @commenter_3 constructive criticism is in no way shape or form meant to be passive aggressive. I am just looking at facts. Nail techs make an average of 23k a year. Guiding someone to stay in school and pursue possibly another lucrative degree isn’t being critical. I myself had a child a 16 (before you got rich by doing that) and unless I remained living with my mother forever I needed to do something that would benefit myself and my child. But what do I know. ??‍♀️

LEXI: @commenter_2 morticians only make about 25k a years even less starting out. I appreciate that you’re sharing your experience as a nail tech but I’m happy with what I’m choosing and if I’m good at it then I think I’ll be just fine.

COMMENTER 2: @lexi_actually The starting salary for a mortician starting out on average in the US is $67,000 annually just FYI but not my life I will butt out.

LEXI: @commenter_2 I guess it depends on where you are. The average median here in CO is only 20k. To each their own. Thank you for sharing you experience and have a great rest of your day love.

If you live in Colorado and are thinking you might want Lexi to handle your nails, you may need to give her a minute. “I’ll be able to take clients in school,” Lexi replied to someone asking if she is currently taking customers. “I’m not sure when that will start but sometime next year. I’ll let everyone know when I can start taking clients ?”

I will wrap up this post with a recent picture of Kyler and Lexi’s new addition, baby Jay Wolfe, who is already a master at flexin’ for the ‘gram!