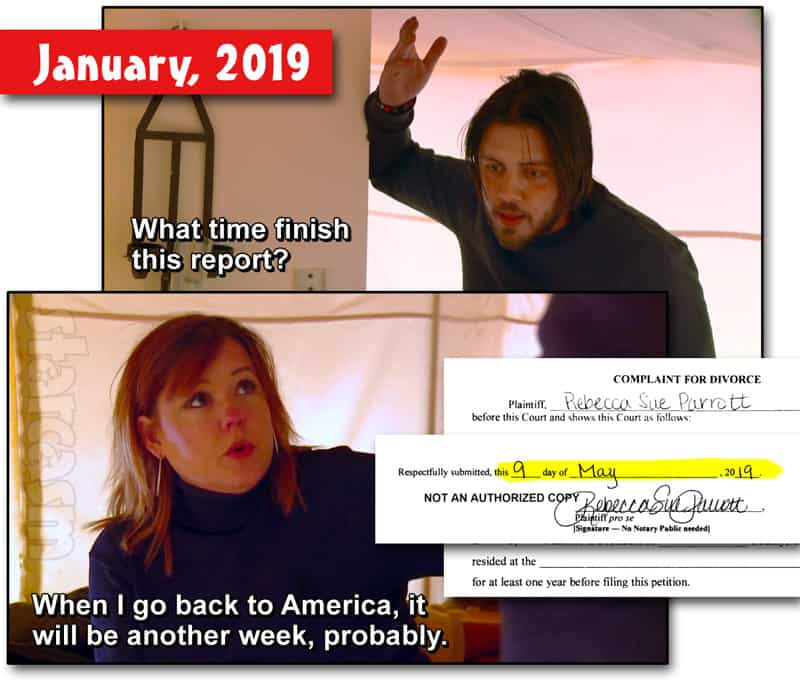 On last Sunday night’s episode of 90 Day Fiance: Before the 90 Days, Rebecca and Zied’s relationship was pushed to the brink when Rebecca made the shocking reveal that she was still technically married to her third husband at the time. Zied seemed “so much angry” and betrayed by Rebecca keeping that fact a secret, but she coaxed him back by assuring him that the papers were signed and they would be finalized in “another week, probably” once she returned to the United States.

But, Rebecca’s trip to Tunisia to visit Zied was in January, and she didn’t officially file for divorce until May! So did she lie to him again?!

Let me set the stage with Rebecca and Zied’s emotional scene inside their romantic Sahara Desert tent:

REBECCA: But the papers are filed.

ZIED: In your country, you’re divorced or no? Now you are married or no?

REBECCA: I don’t know how to answer that, I really don’t. Because we both signed the divorce papers.

REBECCA: We signed them, our names. Yes.

REBECCA: Yes, him too.

ZIED: Why you tell me you are not divorced?

REBECCA: Because the paperwork is not finished yet. That’s it.

ZIED: What time finish this report?

REBECCA: When I go back to America, it will be another week, probably.

ZIED: This only you want tell me this? Not something other make me angry in your life?

ZIED: You promise me?

We were the first to report that Rebecca was still married when she made her trip to visit Zied in January. Our post was in June, and we revealed at the time that Rebecca had officially filed for divorce the previous month and it had yet to be finalized. We later updated after her divorce was finalized on July 9.

So was Rebecca lying to Zied? Yes and no. But mostly yes!

Rebecca and her third husband were named in a Domestic Standing Order filed in June of 2014, just nine months after they were married. This was essentially a temporary order preventing the parties from harassing each other or their children, selling off property, etc. They are automatically filed in Georgia “once you file any domestic relations actions,” according to Coleman Legal Group. “A domestic relations action includes an action for divorce, alimony, child custody, child support, legitimization, annulment, and determination of paternity.” I do not know what triggered the order.

More than four years later, in early September of 2018, Rebecca and her third husband both signed off on a Marital Settlement Agreement. I assume this is what Rebecca meant when she told Zied they had “both signed the divorce papers.” The agreement states that the couple officially separated in January of 2018.

However, as stated above and in our previous post, Rebecca did not officially file for divorce (which included the signed Marital Settlement Agreement) until May. That is four months after meeting Zied and filming for Before the 90 Days!

#90DayFiance #BeforeThe90Days Just as the preview trailer & her bio suggest, Rebecca was still married to her 3rd husband when she makes the trip to Tunisia to see Zied. We dug a little deeper and found out all kinds of spoiler-ish deets! #evuhdense ??‍♀️ https://t.co/zD4sodK89T

It’s unclear why it took so long for Rebecca to actually file for the divorce, especially since she already had her estranged husband’s signature on the Marital Settlement Agreement. Rebecca apparently had some serious financial issues, as evidenced by her relatively recent eviction and child support issues, so perhaps it was a money problem?

It’s also unclear when Zied found out that Rebecca’s divorce would not be finalized within a week or so after Rebecca returned to the United States. I can only imagine him being so much angry again! I am hoping this question will be resolved on the 90 Day Fiance: Before the 90 Days “Couples Tell All” special. Stay tuned…

UPDATE – Rebecca responded to our Instagram post promoting this article by writing: “Zied knows everything. Lol This is not remotely an issue anymore. I’m not discussing it anymore. It got enough airtime already.”

Coco caught in another club photo scandal with Mustafa Abdi, Ice T yet to react

Pictures of Roman Polanski’s Alpine Swiss Chalet “Milky Way” in luxury resort of Gstaad, where he will be held under house arrest starting Friday