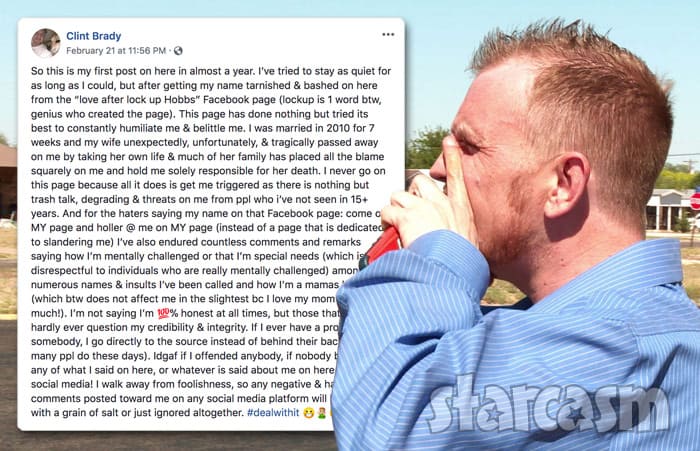 Love After Lockup star Clint Brady took to Facebook this week to share a lengthy statement in which he addresses the passing of his second wife Amber less than two months after they were married. He also responded to people online continuing to question whether or not he is “mentally challenged” or “special needs.”

“So this is my first post on here in almost a year,” Clint begins. He insists that he has tried to to ignore the negativity and “stay as quiet for as long as I could,” but eventually it got to be too much, and he felt as though he needed to respond at length.

Clint calls out the “Love After Lockup Hobbs” Facebook page specifically as a place where he continually has “my name tarnished & bashed” as they try their “best to constantly humiliate me & belittle me.”

The Love After Lockup Hobbs page is where the sister of Clint’s second wife Amber lashed out at him and implied that he had a part to play in her sister’s death. Clint responded briefly to the accusations in a tweet on February 13 (included below). In that tweet he revealed that Amber “took her own life” before adding that he has her “death certificate to actually show how she passed.”

One of the Facebook page’s admins asked Amber’s sister if there was an investigation conducted, and she responded by claiming that Clint’s mother “Alice said that she had tried to commit suicide before and it was left as that since we were not there.”

Despite Clint’s tweet about the situation, his wife’s passing continued to be a topic of conversation on the page and on other social media platforms and forums. As a result, Clint addressed it once again.

“I was married in 2010 for 7 weeks and my wife unexpectedly, unfortunately, & tragically passed away on me by taking her own life,” he says, before adding that “much of her family has placed all the blame squarely on me and hold me solely responsible for her death.”

Aside from speculation from his former sister-in-law, I have seen no other evidence or accusations suggesting that Clint played any part in his wife’s passing.

Clint has also addressed speculation that he is “mentally challenged” before. Here is his tweet from January 23:

Unfortunately for Clint, some viewers continue to openly question his assertion. “I’ve also endured countless comments and remarks saying how I’m mentally challenged or that I’m special needs,” Clint says in Thursday’s Facebook post, before adding that the accusations are “disrespectful to individuals who are really mentally challenged.”

I just wanted to say for all my haters who still think I’m mentally challenged or special needs…keep believing that and underestimating me. U would (and will) be somewhat surprised if u got to know me IRL #keephating #blessednotstressed #mothaf**kincrack

Clint also tackles another “insult,” but this time he embraces it. “Among the numerous names & insults I’ve been called [are] how I’m a mamas boy (which btw does not affect me in the slightest bc I love my mom VERY much!).”

The 37-year-old reality star continues to lash out at the LAL Hobbs page (which appears to be deactivated now):

I never go on this page because all it does is get me triggered as there is nothing but trash talk, degrading & threats on me from ppl who i’ve not seen in 15+ years. And for the haters saying my name on that Facebook page: come on MY page and holler @ me on MY page (instead of a page that is dedicated to slandering me)…

…I’m not saying I’m ?% honest at all times, but those that know me, hardly ever question my credibility & integrity. If I ever have a problem w/ somebody, I go directly to the source instead of behind their back (like so many ppl do these days). Idgaf if I offended anybody, if nobody believes any of what I said on here, or whatever is said about me on here or ANY social media! I walk away from foolishness, so any negative & hateful comments posted toward me on any social media platform will be taken with a grain of salt or just ignored altogether. #dealwithit ???‍♂️??

Clint’s “goddess” Tracie has been much more active on social media, and that includes her own response to claims about Clint. Here’s one Twitter conversation that eventually addressed it:

TWEET: hey girl, any idea where I can find a man like Clint to pay for all my sh*t while I go f**k other dudes and get f**ked up? That’s exactly what I’m looking for in a man. Help a b*tch out. #LoveAfterLockup

TWEET: That cut and color was like putting 2000 rims on a 600.00 car. Taking advantage of a mentally slow dude isn’t skills

TRACIE: U stupid! And for Clint being ‘mentally challenged ‘ as u dumbass ppl say/think, he sure could f**k! And u don’t need skills to do that.

And here’s another Twitter conversation with Tracie in which she defended herself against being called a train wreck: 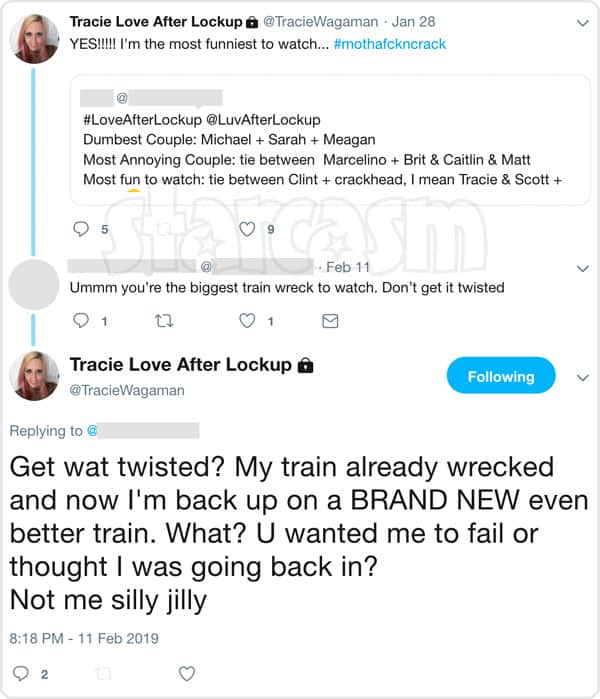 Tracie doubled down on her imperviousness to the negativity with a Facebook message to the haters. Here is the photo of Kermit the Frog that Tracie posted along with her accompanying statement: 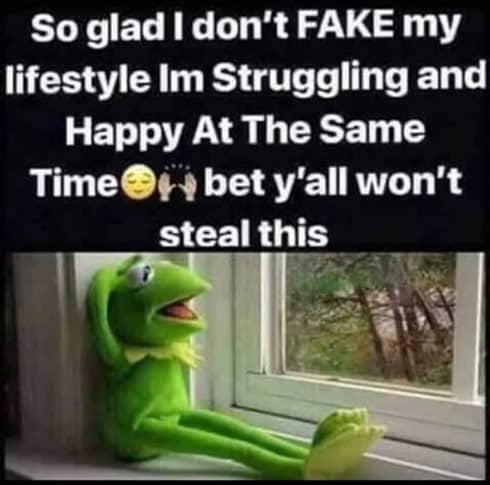 Heres for all u haters and trolls out there. You live off my life and follow my ig, FB, and Twitter accounts and then u talk sh*t bout me. Why not talk sh*t bout ur own problems? Cause u would rather try and bring me down. Not happening. So why don’t u trolls go ahead and screenshoot this post and send it to LoveAfterLockup Savage edition and all the other groups u defame me in. Fyi … Cause it dsnt bother me none. It’s just sad that I can admit to my addiction and all u do is laugh and put me down. I’m so glad that my life is that interesting for ppl to stalk. As for the fans…. U are the sh*t! For the addicts, take it one day at a time. And for the trolls… Get a mf life! #mfcrack

You can continue to follow along with Clint and Tracie’s rather incomparable love journey with new episodes of Love After Lockup airing Friday nights at 9/8c on WE tv. Actually, given that Tracie is back behind bars on the show, perhaps she and Clint should get their very own spin-off series titled Love After Lockup After Love After Lockup! Now that I mention it, Matt and Michael have both been back behind bars as well, so perhaps that should be the title for the second half of the season?