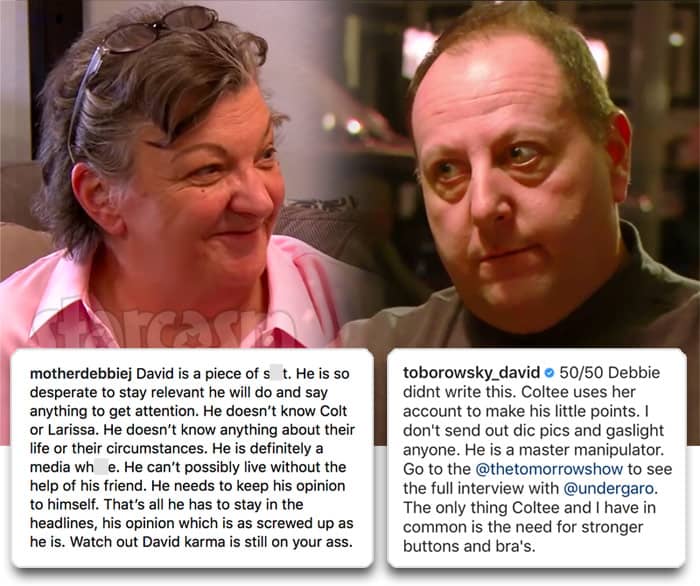 90 Day Fiance Season 5 couple Annie and David Toborowsky appeared on The Tomorrow Show With Keven Undergaro earlier this week, and David shared his less-than-favorable opinion of Season 6 star Colt Johnson. David’s comments found their way to the ears of Colt’s mom Debbie, and she WENT OFF! Things just escalated from there.

I will set the stage with David’s comments on The Tomorrow Show (full episode embedded below). David is asked what his take is on Colt and Larissa’s situation, and who he thinks is more at fault. “I personally feel like Colt teased her,” David says. “He brought her to the US, he controlled money over her head, teased her with a lot of promises. I have a soft spot in my heart for her.”

David continues: “I just think he’s a manipulator. I mean, he’s sending his dick pics all over the Internet!”

My personal feeling is that he was tormenting her like a dog in a corner…Look, everybody has their own issues in life, and I don’t know what all of hers are. I think he wants to be on TV — he’s made that very well-known, And I think their drama is very real. I think he’s just a master manipulator. He’s a very smart guy. I am not a fan of Colt.

One of the hosts brings up the injuries that Larissa sustained during her last altercation with Colt, injuries that police believed were self inflicted. She asks David who he really thinks is the aggressor in their physical altercations and whether or not he thought Colt really did beat Larissa up.

“I think she beat the crap out of him,” David admits.

Annie laughs and adds: “I think she’s a strong woman.”

David later summarizes his take on Colt and Larissa:

I think he torments her. I saw the video of him tormenting her while she was in the bathtub on the last situation. Look it doesn’t justify what she does, but I’m just saying I still feel that she was tormented like a dog in a corner, and if you keep poking a dog in a corner, what’s gonna happen?

A 90 Day Fiance Instagram account run by Afterbuzz TV host Stacey Olivas shared an article about David’s comments, and Colt’s mom Debbie offered up her rebuttal in the comments:

DEBBIE: David is a piece of sh*t. He is so desperate to stay relevant he will do and say anything to get attention. He doesn’t know Colt or Larissa. He doesn’t know anything about their life or their circumstances. He is definitely a media wh*re. He can’t possibly live without the help of his friend. He needs to keep his opinion to himself. That’s all he has to stay in the headlines, his opinion which is as screwed up as he is. Watch out David karma is still on your ass.

COMMENT: very true but media is media and Colt is out there promoting his “divorce party”. If Colt didn’t want the attention he’d be dealing with his divorce privately but he chose to do it through media and in a strip club. Some could call him an attention wh*re as well, just be aware of the names you call others could also pertain to your son.

DEBBIE: Colt is not out there getting attention by spreading lies about other people. That’s all David is good for.

The ever-watchful David saw Debbie’s comments, and he lowered the boom boom with his reply:

I am so glad she takes up for her pathetic son. 50/50 chance he runs her IG. I still would not trade my life for his. I have a beautiful wife who loves me and I don’t live with my mother and 3 cats. I might not have the material things they have but I have a better life.

The Debbie comment was getting posted on multiple 90 Day Fiance Instagram accounts, and David was ready and waiting as he iterated some of his previous points with more responses:

50/50 Debbie didn’t write this. Coltee uses her account to make his little points. I don’t send out dic pics and gaslight anyone. He is a master manipulator. Go to the @thetomorrowshow to see the full interview with @undergaro. The only thing Coltee and I have in common is the need for stronger buttons and bras. 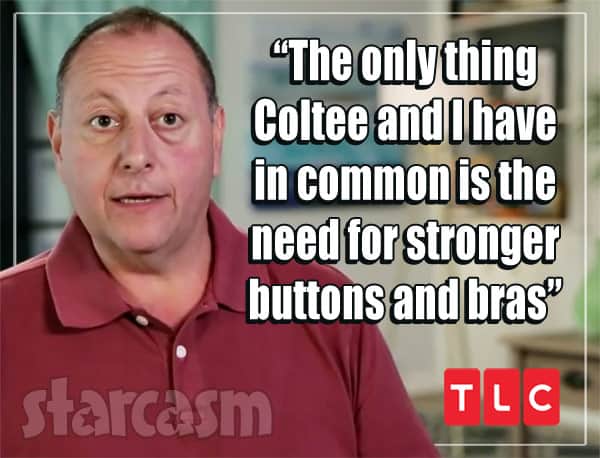 I wouldn’t trade my life for Coltee’s. He is 33 years old living with his mother and several cats going through a divorce and trying to get women with his little d pics. Thanks but no thanks. I have a beautiful wife who loves me. I might not have the cash they have but I have my life.

One commenter joked with David by revealing that she was “kinda disappointed you didn’t mention the boom boom that you’re getting but he isn’t anymore.”

David snapped right back by writing: “He never could Boom Boom. Nothing to boom with. More like flick flick.”

Debbie seemed to be saying “peace out” to their conflict with her response:

Who, dude mellow out. You have your life and we have ours. Please stop commenting on ours. You don’t know s—t about us. You are not important. I refuse to argue with you. Go live your life and stop using us to make you important. Give Anne hugs. ?

So who are you pulling for in this 90 Day Fiance social media Thunderdome conflict? Are you #TeamTobo or #TeamDebbie? Or are you just tuned in for the halftime show and commercials?

Here is the full episode of The Tomorrow Show With Keven Undergaro featuring Annie and David Toborowsky: