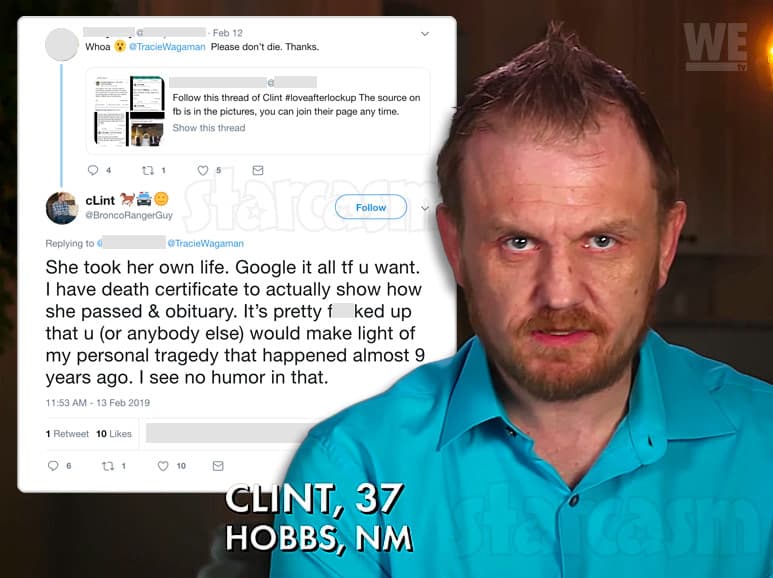 In our very first profile post about Love After Lockup stars Clint and Tracie we revealed that he had been married twice before. His first wife was Haily, who is his boss and has been featured numerous times on the show. His second wife was named Amber, and she tragically passed away less than two months after she and Clint were married in June of 2010.

There were numerous Facebook posts about Amber by Clint and his mother Alice when I first researched him, including a lot of wedding photos, but there was no information that I could find about her cause of death. I decided at the time to not share much information about her aside from their wedding date and the fact that she had passed away shortly thereafter.

Amber’s sister Heather has recently been making some very serious allegations against Clint, however, and he has sparked a discussion about Amber’s passing by responding publicly on social media. “Clint is a piece of sh*t!!” Heather posted to the Love After Lockup Hobbs Facebook page late last month. “He was somehow involved in the death of my sister (his 2nd wife) He’s a cracked out douche bag and y’all should be very careful!! GREAT PARENTING ALICE&KENDALL.”

Heather returned a few days later and made another post that included a photo of a message allegedly sent to her by Clint’s mother, Alice: 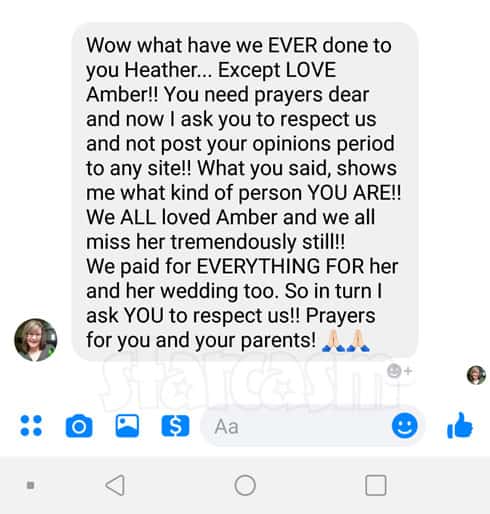 “U better hope God has a spot for you and yours,” Heather wrote along with the picture. “Dont mind me.. Swerve hater Alice in wonderland!”

Heather made a couple more derogatory comments about the Brady family before posting a wedding photo of Clint and Amber and captioning it with: “One of the saddest days ever.. A month and a half later she was gone.. Killer!”

Someone shared Heather’s posts on Twitter and tagged Tracie with the message: “Whoa ? [Tracie] Please don’t die. Thanks.”

Clint responded to the tweet by explaining that Amber took her own life:

She took her own life. Google it all tf u want. I have death certificate to actually show how she passed & obituary. It’s pretty f**ked up that u (or anybody else) would make light of my personal tragedy that happened almost 9 years ago. I see no humor in that.

The person who shared the initial tweet insisted “I wasn’t laughing,” and Clint responded again: “I just don’t see why ppl make jokes of such tragic situations is all. What’s there to joke about exactly ?”

Heather returned to Facebook on Wednesday. “And Tracie should watch what she says.. When she has no f**king idea about my sister and what happened,” she wrote.

An admin for the Love After Lockup Hobbs page replied: “I’m sorry to hear about this. Was there an investigation?”

“No,” Heather added. “Alice said that she had tried to commit suicide before and it was left as that since we were not there.”

Echoing what Clint’s mom Alice wrote in the message to Heather, she posted a photo of Heather participating in Clint and Amber’s wedding back in 2010 and described her as “my 2nd daughter.” Alice said something similar of Clint’s best man before clarifying: “Not really my children, but I love them as if they were.”

Here is another post from Alice from 2011 in which she has nothing but absolutely wonderful things to say about her former daughter-in-law and her relationship with Clint: 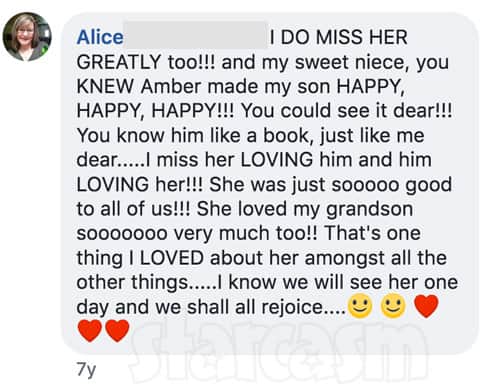 It’s unclear if the topic of Clint’s second wife will come up on the show, but given that the current season was recently expanded from 14 episodes to 24 episodes, I am guessing that we will see Clint talk about it eventually.

You can continue to follow Clint and Tracie’s very unconventional love story play out with new episodes of Love After Lockup airing every Friday night at 9/8c on WE tv!

LOVE AFTER LOCKUP Are Clint & Tracie homeless? Reportedly kicked out by his mom, selling off furniture