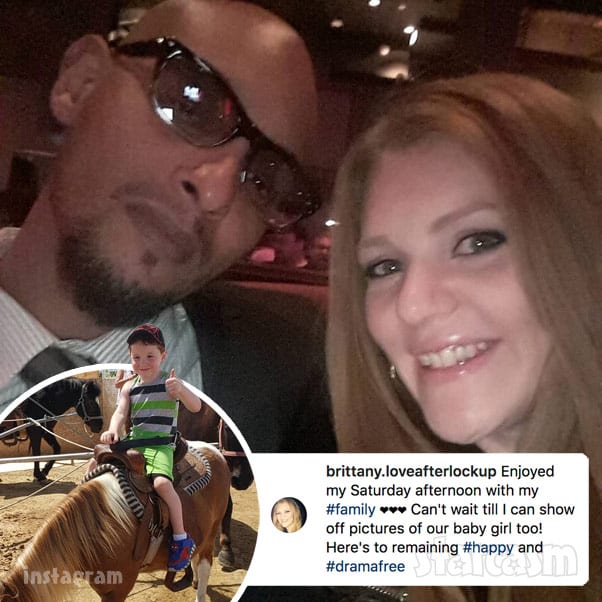 Marcelino was the first to respond, although he wasn’t able to go into a lot of detail because he and Brittany are currently under contract (and filming) for the recently announced Love After Lockup: Life After Lockup spin-off. “There no such thing as kidnapping going on whatsoever,” Marcelino said during an Instagram live session. “That’s a lie — straight up a lie.”

After expressing frustration over not being able to say a lot more, Marcelino continued: “Giovanni is not kidnapped. He’s fine, safe and sound.” He says that viewers will see all of this drama play out on Life After Lockup.

“I’m only going live because I want y’all to know,” he continued. “People were really concerned about it. There’s no type of shenanigans going on whatsoever. Everybody’s safe and everybody’s sound. Everybody’s right where they should be.”

Brittany was also limited in what she could say, but she did assure everyone that everything is fine. She shared a text graphic on Instagram that reads: “ACCEPT RESPONSIBILITY TAKE ACCOUNTABILITY STAY HUMBLE AND ADMIT WHEN YOU’RE WRONG!!!!” She added the following as a caption:

I hate it when someone is wrong in a situation and they rattle off a list of nice things they’ve done over time and through it in your face ?? no one’s saying you’re a bad person and people aren’t perfect. Admit when you’re wrong instead of “deflecting”…. pay close attention to those that go out of their way to make someone else look bad and overly praise themselves because that’s usually the first sign something’s going on with them that they feel guilty about! #facts #facts? #growup #realtalk #remainpositive #findpeace #teambrittanyandmarcelino #weseerightthroughyou #successafterprison #felon2fame #stayhumble #dowhatsright

In case you missed it, when Brittany’s ex Tito Santana made the claim that Brittany kidnapped Giovanni on Facebook, he mentioned several times that he always made sure she and Giovanni would have time together. “I went out of my way so that she could still see her son, while she was in jail, prison, and slamming herself with every dope she could find…and for that, this is what I get?” Tito wrote. He later stated that he hoped that Brittany being able to spend a lot of time with Giovanni would help with her sobriety.

In a much less subtle message that Giovanni is fine, Brittany posted a gallery of photos (above) of her son gleefully riding a pony on Saturday. “Enjoyed my Saturday afternoon with my #family,” Brittany wrote, adding three hearts. “Can’t wait till I can show off pictures of our baby girl too! Here’s to remaining #happy and #dramafree.” Brittany concluded with a string of hash tags that included: #teambrittanyandmarcelino, #heathlyrelationships, #wetv, #loveafterlockupwetv, #familygoals, #lifeafterlockup, #loveafterlockup and #felon2fame.

Tito said on Saturday that the police are involved, before suggesting that Brittany and Marcelino were trying to take Giovanni in a custody battle in order to stir up drama for the show. “The cops already called her on her phone,” he said, referring to Brittany. “She didn’t answer.”

Someone brought up Brittany and Marcelino’s wedding, and Tito’s response included the story line accusation. “Yes I know about that super fast for ratings, wedding. I had no problems until 3 days ago when they realized that they were pretty much done with new sh*t they had to present to the fans so….CUSTODY BATTLE!”

As we stated in our previous post, Tito was granted primary custody in a ruling signed by a judge in March of 2016 — just before Brittany was arrested on the charges that would result in the prison sentence that she was still serving when Love After Lockup Season 2 began filming.

After seeing and reading all that I have over the weekend, what it sounds like is that Marcelino and Brittany believe that there is a legitimate reason that Tito should no longer have primary custody of Giovanni. Marcelino was very calm and confident during his live session, and I got the genuine impression that there was A LOT going on here that we don’t know about. Add in the fact that Brittany posted photos of Giovanni, and it certainly seems to me as though they are confident that they are in the right for taking him.

We will certainly keep our eyes peeled and will update as soon as we know more!