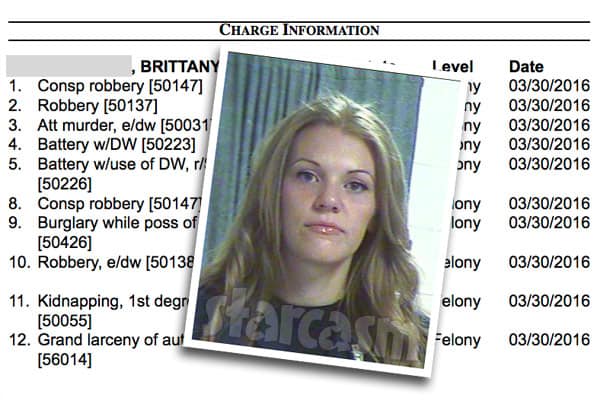 In the first episode of Love after Lockup Season 2, Marcelino revealed that his soon-to-be fiancee Brittany had “accumulated quite a rap sheet” that included robbery and conspiracy to commit robbery charges. When talking with his friend about Brittany, Marcelino also revealed that she had a grand theft auto charge. What Marcelino failed to mention is that her 2016 arrest was the result of a shooting, and that she was initially facing 10 felony charges — including attempted murder and kidnapping!

According to court records, here is the full list of initial felony charges filed against Brittany in April, 2016:

3. Attempted murder with use of a deadly weapon

4. Battery with use of a deadly weapon

5. Battery with use of a deadly weapon resulting in substantial bodily harm

6. Burglary while in possession of a gun or deadly weapon

7. Robbery with use of a deadly weapon

8. First-degree kidnapping with use of a deadly weapon

By the time Brittany was indicted, the charges were altered just a bit. Prosecutors dropped the kidnapping, robbery (only), and grand larceny of auto charges, but the others remained.

According to the indictment, Brittany was with another man named Richard when Richard shot a man and took an iPad. It’s VERY important to note that Brittany DID NOT SHOOT anyone. However, she was also charged with attempted murder and the deadly weapon counts because she allegedly “directed and/or commanded and/or encouraged” Richard to shoot the man and take his iPad before they both fled the scene together.

Brittany’s defense attorney later argued in a motion to sever Brittany and Richard’s cases that “even the State’s witnesses do not allege that [Brittany] took part in the alleged incident other than simply being present.” The motion later states that Brittany’s “theory of defense will be that she simply accompanied a friend [Richard] to a meeting with a stranger because she thought that her friend wanted to purchase an iPad from that stranger.”

Although Brittany was not found to be completely innocent in the matter, she was able to get a plea deal that reduced all of the charges down to a single felony count of conspiracy to commit robbery. Brittany was sentenced to 2-5 years in September of 2017. If you’re wondering how Brittany was able to get out of prison in early 2018, that’s because she was credited with 531 days for time served. 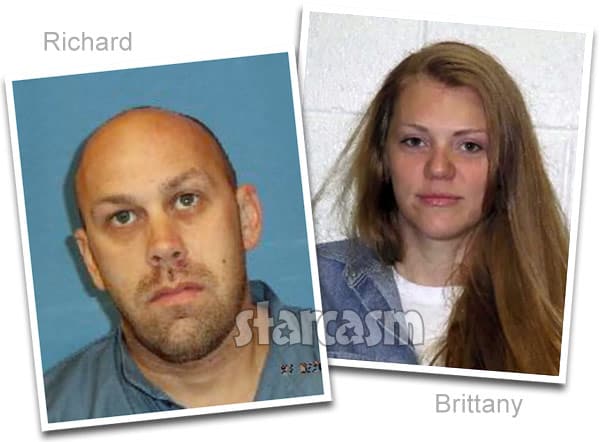 Meanwhile, Richard (mug shot photo above) pleaded guilty to three felonies: conspiracy to commit robbery, Battery with use of a deadly weapon resulting in substantial bodily harm, and possession of a firearm by a prohibited person. Richard had five previous felony convictions, so he was sentenced as a habitual offender. He received a prison sentence of 8-20 years for each offense, but those sentences are concurrent. At the time of this post, Richard is still in prison in Nevada. He will be eligible for parole in March of 2024.

Brittany has been very open about her difficult past, and she has owned up to making bad decisions and hanging around the wrong people. This clearly seems like an example of of both of those things.

Brittany and Marcelino are now happily married with a daughter of their own, in addition to Brittany’s son Giovanni from a previous relationship. Love After Lockup is not known for churning out happy endings, but I have my fingers crossed that these two will be one of the rare exceptions.

Speaking of happy endings, this Friday is the special two-hour Love After Lockup Season 2 finale episode, which will include Marcelino and Brittany’s wedding! So, you DO NOT want to miss that! (I know I will have my popcorn ready as I wait to see if the fact that Marcelino was married to someone else comes up!)