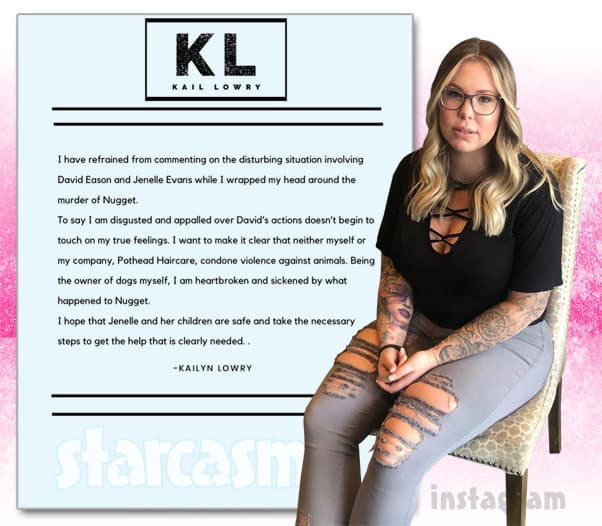 There has been a tidal wave of outrage over the shooting of Teen Mom 2 star Jenelle Eason’s French bulldog Nugget by her husband David Eason on Monday, but most of the actual teen moms themselves have remained relatively quiet about it. Their silence had many people speculating that MTV had asked them to not talk about the subject publicly. Jenelle’s co-star, and former Teen Mom 2 bestie, Kail Lowry disproved the MTV silencing theory moments ago as she shared an official statement condemning David’s actions.

“I have refrained from commenting on the disturbing situation involving David Eason and Jenelle Evans while I wrapped my head around the murder of Nugget,” Kail explained in a text graphic posted to Instagram.

To say I am disgusted and appalled over David’s actions doesn’t beginn to touch on my true feelings. I want to make it clear that neither myself or my company, Pothead Haircare, condone violence against animals. Being the owner of dogs myself, I am heartbroken and sickened by what happened to Nugget.

I hope that Jenelle and her children are safe and take the necessary steps to get the help that is clearly needed.

Some commenters criticized Kail for using the statement as a way to promote her Pothead Haircare line, but she explained:

Unfortunately I have received many complaints both personally and via my company for not speaking out regarding this situation. So yes, this needed to be said.

Jenelle’s co-star Briana DeJesus, who is the only cast member who has consistently defended Jenelle’s relationship with David, responded to one of David’s Instagram posts soon after the story broke. The post included a video of Nugget snapping at Ensley, and a photo of Ensley’s reddened cheek. In the caption, David doubled down on his decision to shoot and kill Nugget as he claimed he did it to protect his family.

“You should delete this,” Briana wrote, before pointing out that he could have defended his family without having to shoot a French bulldog. “I know you want to protect your baby girl but there could’ve been other ways of doing that. Your wife is already going thru enough and dealing with a lot of unnecessary sh*t. Be her peace ♥”

Later, Briana spoke with Radar Online. “I am very disturbed to hear about the alleged dog incident,” she said. “I don’t care who you are, but hurting animals is not okay and my heart is breaking over this,” she added.

Briana emphasized that she will still back Jenelle — regardless of what she decides to do. “I support her in every way I can, and she knows that I am here for her however she needs…I know she wants her family and I am here for her in any way she needs me as she attempts to figure out her next steps,” Briana said.

Despite her commitment to Jenelle, Briana went one step further in distancing herself from David. “I think there are obvious concerns regarding David and regarding children being around him,” Briana admitted.

Briana’s support drew some criticism on social media, but she laughed it off:

Jenelle’s other Teen Mom 2 co-stars, Leah Messer and Chelsea DeBoer, haven’t said much at all about the incident directly. The same cannot be said for their parents.

Chelsea’s dad Randy Houska, who has a history of clashing with David and Jenelle, and who owns French bulldogs himself, was quick to condemn David’s actions in a series of tweets:

What is the age limit for being disgusted by another human being’s actions? I am on the show, I get an opinion.

Leah’s mom, “Momma Dawn” Spears, reacted to one of Randy’s tweets, then expressed her anger on Twitter with a text graphic and additional tweets:

How true and very sick! He needs charged and required psychiatric treatment

WHATEVER!!!! I don’t like the kids leading that we are all animal abusers! Leah will make it even after the show

Getting rid of them couldn’t come quick enough

One Twitter user shared Momma Dawn’s text graphic and argued that there aren’t really people accusing the other moms from Teen Mom 2 of being animal abusers because of David and Jenelle’s actions. Leah responded by explaining: “I think the behavior from other cast does reflect on us… and it’s good for our viewers to KNOW we do not condone the evil and hatred behavior!”

MTV has still yet to issue a statement on the shooting. Numerous businesses have announced they are pulling their ads from the show, but MTV remains silent.

As more and more companies announce they are pulling their ads from #TeenMom2 in the wake of David shooting and killing Jenelle's dog Nugget, @MTV remains silent.

MONIECE SLAUGHTER FINDS OUT ABOUT NUGGET

On a random side note, Love and Hip Hop: Hollywood (and reportedly soon-to-be Love and hip Hop: Atlanta) star Moniece Slaughter saw Kail’s post, but was blissfully unaware of what was going on. “B*tch. Who is Nugget?” Moniece commented on Kail’s statement. “And what the hell did Davida do to Nugget?”

Another commenter explained that Nugget was Jenelle’s dog and David shot her. That inspired this reflection from Moniece on Jenelle’s situation:

smh. That’s sad for nugget. As for beef curtains…I wish I could feel bad for her, I can’t. I feel bad for the kids. They didn’t get to choose her as a mother. Or him as a father & step father. She’s so broken that she constantly puts her children in harms way by making poor decisions. And I can’t respect or empathize with it for someone that can choose to live a healthy life with the right treatment. But voluntarily chooses the option. She’s sick. And as a result she chooses sick people.

Jenelle & David attend Kaiser’s 5th birthday, Nathan explains: ‘Vengeance is the the Lord’s, not mine’