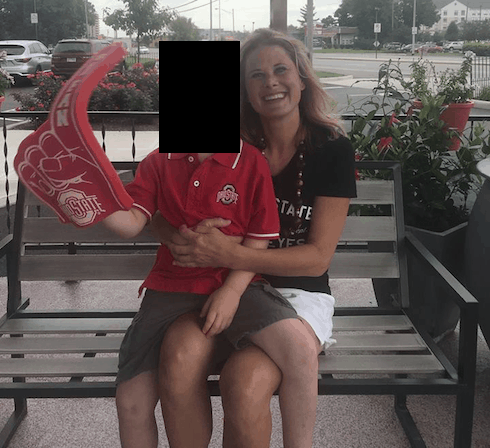 Police in metro Atlanta are still searching for a mother who used her son’s sippy cup to sneak alcohol into a movie theater, and then became too intoxicated to care for her child.

Kristina Gibson, of Marietta GA, has been charged with one count each of public intoxication and reckless conduct after attending a late afternoon movie with her 5-year-old son, alcohol in sippy cup firmly in tow. And, according to the arrest warrant, Gibson — seen above with her son in a photo taken last month — may also have taken a tranquilizer while at the Merchants Walk Cinema with her child.

The Atlanta Journal-Constitution reconstructed the day’s events, with a little help from the Cobb County Sheriff’s Office police report. On Friday, September 28th, at just after 5 o’clock in the afternoon, “Gibson filled her 5-year-old son’s sippy cup with a strong alcoholic beverage and became intoxicated in the theater.” Gibson got too hammered to “walk, talk, or care” for her son. And it was the cries of the son that attracted enough attention for other audience members to complain to theater staff.

Gibson then tried to leave; employees kept her from getting into her car. However, despite Gibson’s level of intoxication, and the fact that she told a police officer who tried to zip up her purse “I will [expletive] kill you,” Gibson was not arrested at the theater.

“She wasn’t a threat at that point any longer,” explained Cobb Police spokesman Sgt. Wayne Delk.

Instead, Gibson was taken to the hospital, and a police officer called a friend of Gibson’s to take the son back home. But the line of logic gets a bit confused at this point. Though a Marietta Daily Journal article on the incident contains a longer quote from Sgt. Delk, it doesn’t explain why Gibson wasn’t arrested at the scene.

“[The officer] made sure the child was safe with another adult that the mom knew, and then actually had her transported to the hospital,” Delk said. “He actually took a warrant out for her while she was getting treated medically.”

The first officer arrived at the scene at 5:21 PM on Friday, and the arrest warrant was issued at 8:15. However, as of the evening of Wednesday, October 3rd — five full days after Gibson’s alcohol in sippy cup incident first registered — she still hadn’t been arrested. And since nothing in the arrest warrant suggests her behavior at the hospital was what justified bringing charges, it’s unclear why Gibson wasn’t arrested while still at the hospital.

Also unclear: how Gibson managed to check out of the hospital and avoid further police attention between then and now. It seems a curious omission, and we’ll update the article if and when any new information emerges (like, for example, Gibson’s arrest).