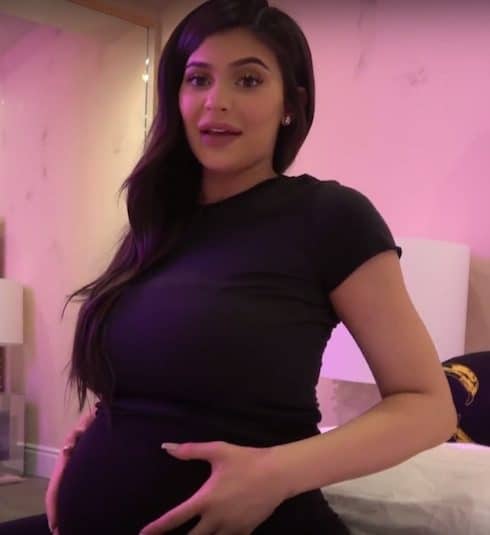 The world has known about the birth of Kylie Jenner’s baby for a little over 24 hours, which it turns out was more than enough time to send it into a tizzy. The latest craze is speculation over what Kylie and baby daddy Travis Scott may have named their little one: thanks to the available tea leaves, the question of the moment is Did Kylie Jenner name her baby girl Butterfly?

Turns out there’s plenty of evidence to support the theory, if you’re patient (and conspiracy-minded) enough to connect the dots. For starters, there’s the butterfly jewelry Kylie began sporting on her Instagram page right around the time of her top secret pink-tastic baby shower last November. At the time, fan gossip centered mostly on the pink updates suggesting that a girl was on the way — which of course turned out to be true — and that “shoot day” in the caption referred to a gender reveal photo shoot:

After that, there’s the fact that famed tattoo artist Jon Boy congratulated the new parents on the birth of their little girl shortly after Kylie’s announcement — and did so with a photo that appears to show both Kylie and Travis with matching teensy-tinsy butterfly tattoos. (Though it also kind of looks like the tattoo on the left belongs to the baby herself? Which can’t possibly be the case; it’s just that the size of the ankle in the left pic looks way too small for an adult.)

congrats to @kyliejenner & @travisscott for your little miracle ? #jonboytattoo

In addition, butterflies have been of profound importance to Travis Scott’s career. Last May, he dropped the track “Butterfly Effect” in fans’ laps somewhat unexpectedly; the single went platinum and the video is one of his most popular. Mid-May is shortly after he and Kylie began dating, and around the time that she became pregnant.

*And* the song may have been responsible for bringing the two of them closer together: the big rumor shortly after the song’s release was that Travis had cheated on Kylie with a video vixen he met on the set of the “Butterfly Effect” shoot, but that he and Kylie managed to work through that drama.

Maybe most tenuously in Did Kylie Jenner name her baby girl Butterfly talk, there’s this beauty product update that Kris Jenner shared a day after the baby was born but three days before Kylie announced the birth. Thanks to Kris’ wording and the fact that it’s a Kylie product she’s hawking, fans seem to think that “Posie” is a possibility for Kylie’s baby’s name, since the word is a short Anglicization of “Mariposa,” which means “Butterfly” in Spanish. (On that note, nobody seems to think “Mariposa” is a possibility, even though it’s a much prettier word — as well as a beautiful place to conceive a child.)

And we’d be remiss if we didn’t point out that, per Us Weekly, the butterfly-adjacent name “Monarch” also seems to be a fan favorite.

“But wait,” you may be saying. “Doesn’t Kylie Jenner hate butterflies?” Indeed, she sure seemed to when she freaked out and fled the scene after one attacked her at a London zoo in a Life of Kylie episode that aired last fall. “I’m scared if one lands on me!” Kylie shouted in the scene, later adding, “I’m terrified, terrified of butterflies. All butterflies. This is how I think of them: cut the wings off and if you just look at their bodies, they’re not that pretty. It’s literally a bug.”

So, did Kylie Jenner name her baby girl Butterfly? Maybe the whole Life of Kylie scene was just reality TV misdirection — Kylie may have been pregnant when it was shot, and was definitely pregnant when the episode was edited and aired. In any case, she and Travis apparently do have a name picked out, though they aren’t ready to share it yet.

Until they make it official, we’d like to suggest that the happy couple go with “Sommerfugl,” the Norwegian word for “Butterfly.” It’s a unique name for Americans, and would have the added benefit of keeping little Sommerfugl Jenner well-grounded despite the billions of dollars she’ll inherit one day.